Posted on January 15, 2015 by Christopher Cudworth

So this morning at the indoor track my gal Sue was doing a tough interval workout. It was a ladder up from 200 meters to a mile and back down again. Ultimately the fatigue sets in with such workouts. We’ve all been there.

This past month she’s been considering her running form as part of preparation for the Ironman she’s shooting to do in September. There’s a running form coach working with a group of athletes at the indoor track and it’s been interesting to be around them while they practice their form with drills and tempo training.

I’ve been running workouts with Sue but did a stupid thing this past weekend and sprained my knee hurdling an orange cone during a snowy race. So I’m hobbled for a week or so, confined to slower running until my knee strengthens up. I lost focus during that run and got a bit out of my head in having fun. It will cost me a couple weeks of good training.

But I still went to the track for a 15-20 slow run. It’s important to keep up your workout schedule even if it’s reduced. It keeps your mental frame of mind in a positive place and intact.

It’s all part of being in the flow. That brings me to the subject of the difference between “get through it” and “let’s do it.” Because when Sue and I have run together I’ve noticed an incredible thing about her running form. She really smooths out at a faster pace. She also rides much better at a quicker tempo than when we’re pedaling along at 15-18 mph.

This phenomenon is common for many athletes. As I was trying to describe the difference to her this morning while showing her a video of her running form, I told her, “You have two modes of running. There’s the “get through it” mode which is sort of a survival stride… And then there’s the “let’s do it” mode… in which you smooth out and run faster. Ideally you want to spend more time in the “let’s do it” than the “get through it” phase.”

Well, that’s partially true for her. In an Ironman most competitors definitely depend on the “get through it” mode during the marathon phase of the race. There simply aren’t many people who can hop off a bike after 112 miles of hard riding and jump right into their normal marathon pace. In fact no one can.

But to compete in regular races such as half marathons or even marathons without 112 miles of cycling holding you back, it is important to understand the difference between “get through it” and “let’s do it.” A lot of us preemptively fall into our “get through it” mode before we need to rely on it. We’re either afraid to run or ride faster for fear of bonking or we simply do it out of habit.

Indeed, it really is true in cycling as well. We fall into that zone where cadence slows. We slump on the seat and hang onto the handlebars as if we’re chained to a beast of burden rather than a carbon fiber bike. We hang on and hang on. Even if we’re riding alone, we hang on and hang on. We’re just trying to ‘get through it.’ Whatever “it” is… 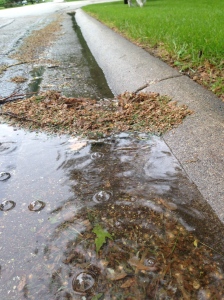 There’s a degree of mental preparation that goes into all this. Getting your head ready for the workout or effort you’ve planned is crucial to quality running or riding. For starters, it helps to be organized in advance of the run or ride. That helps you clear your mind of cluttered thoughts and distractions. A preoccupied mind is one that cannot focus on the task at hand.

If you’re prone to distraction by nature or wrestle with any form of emotional or analytical challenges such as anxiety, depression or ADD, it’s even more important to organize your thoughts. You simply must clear your head in advance of a workout. Outside stressors are a normal parr of everyone’s life, so don’t make any assumptions about your abilities. It pays to organize your world, and thus your thoughts. That way you give yourself the best odds of staying focused, engaged and energized during your workout or race.

Otherwise your mind stands in conflict with your body. We all experience it at times. Everyone who runs, rides and swims needs to learn to control or guide those important thought processes so that your brain doesn’t want to give up during a hard effort simply because it’s already worked too hard just to get you out there.

That’s when you fall into “get through it” mode. So do yourself a favor. Before your workout do a review of your daily status in terms of relationships, work obligations and creative endeavors. If you feel conflicted or over-obligated in any of these categories, you’re likely going to feel pulled apart and wind up just “getting through” your workout rather than being fully engaged. A good mental exercise is to literally write down the thoughts that dominate your mind on a piece of paper. Make a list. If there are any that absolutely must be solved before you work out, then do them. Now.

The rest can be fodder for problem solving during your workout. That’s when many of us resolve our issues. It’s not a conflict of interest or a distraction to think about other things while we train. But if those things are immediately pulling us in two directions because they are impacting us in some material or relational way, then there may at times be work to do before taking them on the road. Personally, I find a mix of both is true. Life is full of gray areas. Sometimes you have to learn to love the color gray and move on.

Some people seem to perform best when they’re under stress. They actually seem to thrive on the jive of tension and pressure. But when stress is cumulative and you arrive at a workout feeling like it is no fun and just another source of stress, it is hard to draw anything out of that situation but survival instincts. You’re likely to do just about anything to “get through it.” Congratulations, you’re now a hot mess due to stress. 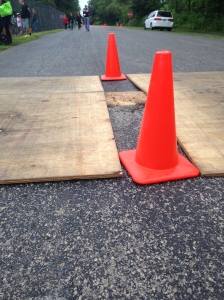 At some point when you’re overstressed you become distracted. You may start to complain to yourself and others that you can’t handle it. That’s when runners or cyclists either drift to the back of the pack or start trying to control the effort by taking control off the front. Either of these approaches can seem like a “let’s do it” mode but in fact it is actually a “get through it” response to overall stress and mental attitude. That type of training is not really healthy for you or anyone else. Better to find a way to cool the attitude a bit and get back in control of your instincts.

THE LET’S DO IT DIFFERENCE

So how do you get into the type of “let’s do it” training that actually takes you where you want to go?

As noted, the difference begins with a focused attitude. It may not always be super positive. We all go through emotional ups and downs during training. A little temper can actually work wonders if you know how to focus it. Being pissed at the world has made many an athlete greater than they might have been otherwise.

The ultimate tools are still focus, which means attention. Then there’s attitude, which means approach. Notice that these to words both relate closely to the idea of “let’s do it.” Being prepared is the first priority. Being focused is the next priority. Having full attention and the right approach are the most important components of a “let’s do it” mode rather than a “get through it” response to training.

“Let’s do it” is an expression of motivation. That’s the trick to a successful workout and racing. Funneling your focus, attention and approach through the refinery of motivation is what gives you that “let’s do it” positivity.

Motivation can come from strange places within us. It can of course be diluted and distracted by stress or other factors. 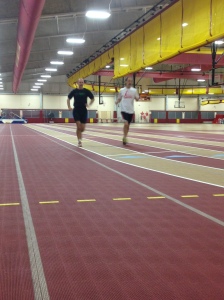 Once during preparation for cross country nationals, our college coach overheard some of the team talking about “burnout” from the competitive season we’d been through thus far. The very notion of that idea sounded like poison to our coach. And he was right.

That night he prescribed a workout that was part mental and part physical. “Okay,” he told us in the team meeting. “We’ve done enough talking lately. It’s time to run. Tonight, no one talks during the workout. Not a word. We will cover six miles at 6:00 pace in an uptempo effort. No talking. See you back here in 40:00.”

And so we ran. The effect was magical. Nothing but the sound of breathing and footfalls. We were bonded in those moments in a new way. We arrived back at the fieldhouse with new attitudes. It felt good to run without the burden of distracting mental thoughts that come through conversation.

Our team that was fifth in NCAA regionals came through with a second place at the NCAA Division III national meet. To this day I credit that “silent” run for giving us the focus and the “let’s do it” attitude necessary to run our best.

The same concepts apply to many other forms of motivation in life. In business a “get through it” attitude reduces productivity. A “let’s do it” outlook is much more productive, engaging and motivating.

The same principles apply to relationships, parenting roles, education and avocations. The important difference between “get through it” and “let’s do it” is focus and attitude. Now let’s go do it. Right.