Do you have a place to hone your speed?

Posted on July 17, 2014 by Christopher Cudworth

We all need a place where we go to get fast. It all depends on your circumstance.

Ever since I was a little kid holding a watch in my grubby little fist waiting for the second hand to reach twelve, I have held fascination with getting faster.

For us it was a football field, wiffle ball stadium and for me, a running track.

At the age of 7 I used to sprint around that yard fast as I could. I was convinced that if I just willed myself to go faster, sooner or later I would.

Perhaps it had something to do with a more than rabid fascination with Road Runner, the cartoon character who was chased all the time by Wile E. Coyote. The idea of zipping so quickly from one place to another absolutely thrilled me. Later on the comics character known as The Flash also propelled me to notions of speedy bliss. Most recently the little kid with speedy legs in The Incredibles gave me that same childlike thrill with speed.

Well, it all came together in its fashion by the time I was a teenager racing in track and cross country. The love of speed and trying to get faster continued on through college and post-collegiately as well. I bought a lot of racing flats and spikes in hopes they would make me faster.

But the one thing that really helps make you faster is finding a location where one can really concentrate on speed. For me that place was the track at Geneva High School. It was 6 blocks from my home with an all-weather surface that had just the right amount of give and take.

Even a stretch of quiet road can be your place to develop speed.

Many cool summer and fall nights were spent circling that track. At peak fitness I did a track workout of 12 X 400 meters at 63 seconds and below. I even threw in a 59 for good measure. Not the stuff of world class runners, mind you, but pretty good for me. That track was home base for all my running PRs between 1 mile to 25Km.

When they erected an 8-foot fence around the track to keep out vandals it was too much trouble to borrow a key or else hop the fence to train. My favorite place to develop speed was closed off, and I wonder how many other runners suffered as a result of that decision to put the track inside a jail. It was all caused by some BMXers who decided that the middle of the football field would be a good place to build a jump mound.

Now the football field is an all-weather surface with so many lines on it for soccer, football and lacrosse you can hardly see the blue astroturf it holds. Under the stadium lights that field looks like a circus.

But I miss my old training ground. The place where my fast-paced footfalls made no echo, and where my cool sweat fell onto the surface as I stood for three seconds panting after a hard interval. Then I’d jog a lap or a half lap for recovery, and do it all again.

We need places like that to help us get faster. We create a physical dialogue with our favorite running track. I’ve also trained in parks and on schoolgrounds where your feet ultimately map out a course. There’s almost a conversation you hold with the grass as you do repeats. There’s a certain pride in seeing that map of our passage.

There was a time as well when you could train on golf courses without being tossed off. That era is pretty much through. Too much litigiousness.

Fortunately there are some new tracks near my home that do not have giant fences around them. While I’m not as fast as I once was, it still feels awesome to lace up and run intervals as hard and smooth as you can. 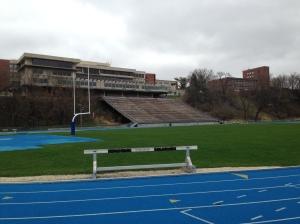 Some things about your favorite places to train may never change. While others will.

Which made it interesting as well to be back on the campus of my Alma Mater, Luther College, where the track is now a smooth blue surface. When I trained there, it was a crushed brick surface that turned to mush in the rain. But the feeling of that place, training under the brow of the Student Union with the bluffs of the Upper Iowa River visible in the distance, will never really change.

Now that I race bicycle criteriums there are places where it is fun to ride circuits to get in shape for actual racing. I’m blessed to live on a street that abuts a park with three baseball fields and tennis courts. It used to be the high school athletic complex back in the 1930s. There’s even a patch of straightaway still visible in the grass from where the

Evidence of the old track is still visible in the spring.

cinders below the surface still tinge the soil. It still shows up even after the massive reworking of the fields late last summer.

So the oversized block around the park is .7 of a mile. Perfect for practicing bike racing because I can see all the traffic as I approach for speedy right turns. Granted I do not stop for the Stop signs. Usually I avoid high traffic periods when school lets out nearby or other peak periods. Kids stop and stare in their yards as I come whizzing past. Again. And again.

I know that I’m getting fit when the speed for 30:00 of racing tops 20mph on my own. Each summer I test myself on that criterium course.

Then it’s time to head over to the spot we call the Pelladrome. It’s an industrial park set of smooth roads backing up the Pella Windows distribution plant on Fabyan Parkway near Batavia. There were supposed to be multiple industrial buildings in the park but the economic crash of 2008 killed those plans along with acres of proposed industrial development right across the street. The roads are nice but the lots are empty.

So the bike racers show up every Wednesday night to race at the Pelladrome courtesy of ABD (Athletes By Design) the bike club run by Prairie Path Cycles and Mike Farrell, who once worked and raced for teams like 7/11.

You can get your ass kicked at any level at the Pelladrome. But that’s the point. You show up and race hard and if you still don’t feel tired, you can keep on riding along with folks at the CAT 1-3 level. No one cares that much. You either keep up or you don’t.

Because it’s all about the draft, and finding your place, and your sense of place. One week you might ride great and be in the sniff for the finishing sprint. The next week you might get caught out on a windy stretch and get blasted off the back. That’s bike racing. It never gets easier. You just make stupid mistakes.

Yet the net result is that you do get faster. Eventually. If you keep at it.

Then the association with that place becomes part of your psychology. Your preparation. Your salvation when you’re making a comeback, or testing out your new legs as a newbie or a pro.

It’s all about finding your rhythm and making it work for you. And a sense of place.