Posted on July 18, 2014 by Christopher Cudworth 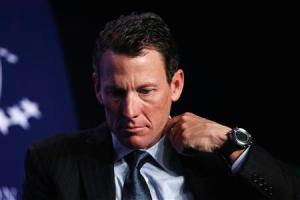 Hi folks. Lance Armstrong here. Yes, I’ve been watching the 2014 Tour quite a bit. Actually been streaming it through my iPhone in the Livestrong phone case while I’m out golfing. Because golf is actually pretty boring. And I’m not that good at it.

For one thing, the carts don’t go fast enough. I could ride a bike much faster than most of these golf carts can roll. I’d prefer to have a golf cart with pedals over these electric jobs with governors on the engines. Not much fun.

Between shots I tune into the Tour coverage and frankly, the television coverage is better than ever. Hardly a moment goes buy that isn’t covered by the NBCSN cameras. They’ve got choppers in the sky and motorbikes just like in my day. But somehow they seem to capture more and more of the agony experienced by these Tour riders. Hell, they even caught Andre Greipel lecturing Sylvain Chavenel about their crash on one stage. More like Andre Gripel.

It all brings back bad memories of the last Tour I tried to ride. You remember that debacle. I crashed and cut my face up. It was like Muhammad Ali in the later years of fighting. The magic was gone, but I kept on fighting.

That’s right, I kept on fighting. Just like I kept on fighting even through all those lawsuits and the lies they forced me to tell. I might have come clean on my own had those lawyers not circled around like vultures over a Tour rider that fell off the Alps. But not, they wouldn’t let me come to grips with the era of doping and cheating all on my own. I might have even written another book about it. I even had a title all worked out: “It’s Not About the Dope.”

Because it really wasn’t. Not when you see all those riders crashing this year. When you hit the deck it doesn’t matter how much dope you have in your system. You’re all crashed and bruised up. Sometimes you can’t even bend your back to sit on the bike. Just look at that Andrew Talansky kid. Tough guy, but in the end even he had to abandon. The first rule of winning the Tour is you’ve got to stay upright.

That’s what I did for 7 great years, you know. I still have the jersey to prove it. And I think that’s why they haven’t come to take them away. Sure, the results no longer credit me with those wins, but the fact remains, I didn’t go down in flames or in a heap of blood and guts after racing more than 14,000 miles through France and all those other countries clinging to the Tour.

Nibali? He has all the looks of a guy in control. I know that look. I know that feeling. That’s all I’m saying.

He’s got a decent team around him, but nothing like the days of George Hincapie and all those guys. Sure, I pissed a few of them off. But at least I paid them for the effort. Not like that British pussy Bradley Wiggins. Talk about no class.

I’d have shown him who’s boss. His Sky team was decent but you know decent isn’t good enough when it comes to putting the hammer down the way I used to do. I was Lance

Armstrong, goddamnit. For seven years no one could beat me. Not Jan. Not Tyler. Not this guy or that guy. My success built Livestrong and turned cycling into a world sport rather than just a backlot cable offering. Remember that fucking Outdoor Life Channel coverage? You almost had to turn the knob to get that thing tuned in.

So let’s be honest, watching this years Tour de France has been a bit like watching an 8th grade obstacle course. Just enough talent and daring to cause trouble.

I know I’m in my early 40s, but maybe just maybe I could still do it. If only these doping sanctions weren’t hanging around my neck.

Well, my tee time is coming up. Time to mosey around yet another posh Texas golf course. When I’m done I might just ride the bike a little today. Hell I might even pull down one of my extra yellow jerseys from the closet and go climb the hills outside Austin.

And I promise you I won’t fall down. Remember my terror trip down that tarsnake road in the descent from Gap? That other dude went down in a roll and I rode the grassy bank and came out the other side. Like a shortcut through the park. Yes, I was good at keeping it upright. That’s what it takes.