Finding unity in a sweet season

Posted on November 3, 2018 by Christopher Cudworth

This is the sixth in a series of articles about the Sweet Season of 1978, my college senior year when our Luther College team placed second in the nation in NCAA Division III cross country. To follow the chronological narrative in full, please begin in order by volume. 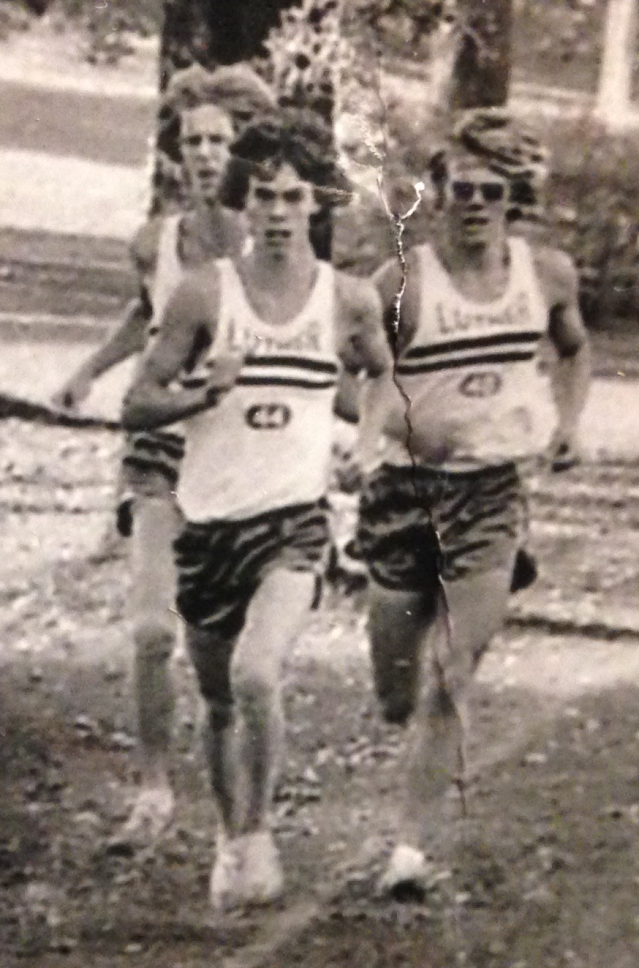 The first week of October brought the first rash of injuries for much of the team. But after a visit to the Mayo Clinic at which a Luther graduate doctor expressed shock at the volume and type of steroids the campus doctor had prescribed to treat my sore Achilles tendon, things settled back into training for me and the rest of the team. Up to that point, I’d covered mileage weeks of 70-82-91-82-90-99.

Blessedly the next weekend brought a meet against a weak Loras College team. We ran our Junior Varsity runners against them and still won the meet. That freed some of us to heal up from the constant barrage of training and competition. We still put in 82 miles of training. The onset of true fall was beginning and my running journal stated simply: ” Leaves are changing.”

By October 12th we ran a beautiful thirteen-mile route called the Bluffton. The roads took us through rolling terrain. Temps were 55 degrees and my journal noted, with relief: “Achilles better.” Over the weekend we ran 3-10 and 7-8 training days. The weather turned cool and windy again. The gyrations of autumn weather had also begun.

The same could be said about the nature of my love relationship and the woman with whom I was so totally smitten. But her tempestuous nature and constant testing of my loyalty suddenly got the best of me. I noted in my journal: “Told Jenny I am done.” That night I went down to the bars and after a couple hard drinks told a few friends about our breakup. She and I stayed apart for the evening, but called each other once we got back to the dorms.

By the next morning, we’d resolved our lover’s spat, but the rumors of our breakup had spread to my teammates. Questions flew and concerns were expressed at the next morning’s practice. Someone had even shared the news with our coach, and even he asked how I was doing in the love department. They were all looking out for me, and knew that every runner depends on a certain level of stasis in their life in order to run well. The guys didn’t want me to collapse into remorse as a result of a busted relationship. 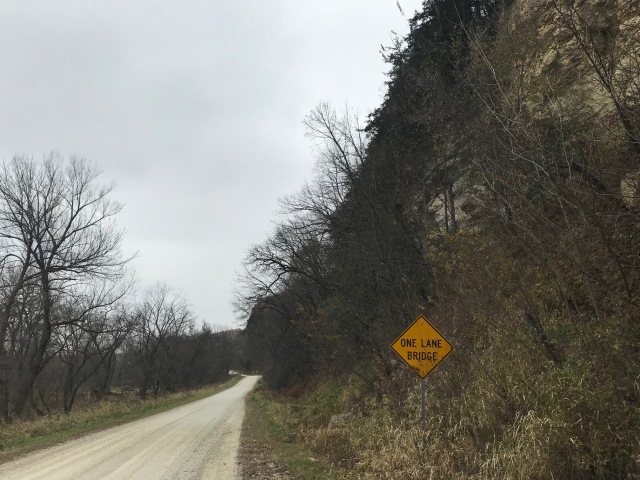 Part of the healing process was going on a walk with some close friends Bob and Kirsten. The woods and hills around Decorah, Iowa were always lovely beyond description. Every run we did held fascinating scenery of one kind or another. Even after the leaves fall, the shape of the landscape is intriguing and full of mystery.

Later that day I went for a solo bird walk to gather my wits and have some time alone. The afternoon was murky and as I crept into a limestone canyon in search of ruffed grouse a bird flew up into a tree and I quickly identified it as a Townsend’s Solitaire, an irruptive migrant from the far western portions of the United States. Something about the bird seemed like a good omen. I still felt really strong inside and out. I was standing up for myself, a new feeling in my life.

Show me my rivals 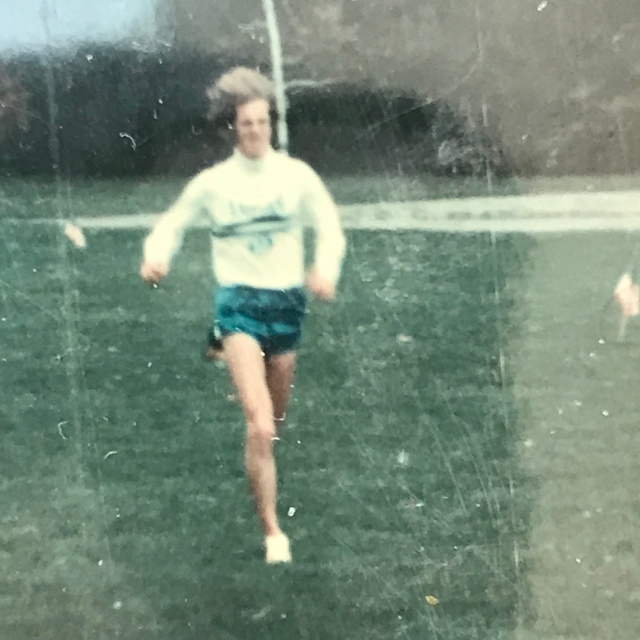 A pic from my sophomore year at Luther, at the Carthage invite in Kenosha

On Tuesday night we had a meet scheduled against one of our top rivals, the University of Wisconsin-LaCrosse. I loved running against them in both cross country and track. There was something about their team attitude and the character of their guys that made me want to compete rather than being nervous or scared. For several years they’d been led by a pair of twins we called––with a high degree of respect and reverence––The Hanson Brothers. Jim and Joe. Both had run mile times close to 4:00 and were All-Americans in many disciplines of running. Their presence always lifted the quality of a race, and their skimming strides were so distinctive there was no mistaking them in any situation.

But they had graduated by the time I was a senior, replaced by an almost equally tough set of runners wearing the maroon and white colors of LaCross. I was so prepped for the race that I took the lead going into the second mile. I held that lead for much of the race and had hopes of taking the overall win for the first time in my college career when a LaCrosse runner caught me with half a mile to go. We ran stride for stride up a steep incline and he gained a few yards. Then we sprinted to the finish but I could not catch him. Still, that was no real disappointment given that I’d never before finished as first man for the Luther varsity. And I’d run my best race against LaCrosse. That was satisfying.

It was also bittersweet as our top man was still limping from the injuries we’d all picked up the week before. The tectonics of training and racing thirteen meets in a season were upsetting the team apple cart. 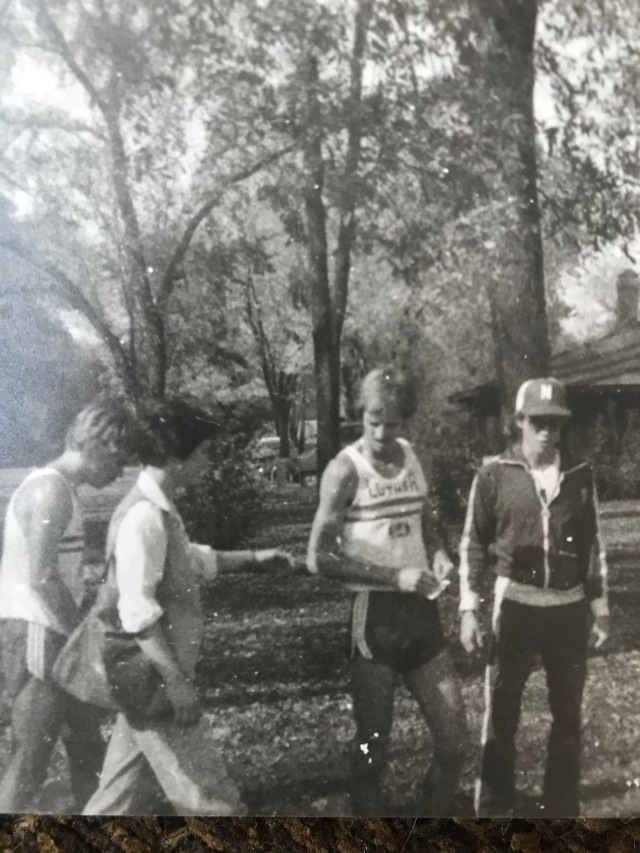 My roommate and Luther’s top runner Dani, my girlfriend, myself and asst. Brad after Carthage

As we headed into a big meet at Carthage College in Kenosha, my confidence was high. However, we did a ton of speed work that Thursday and I felt stale and a bit “stomachy” warming up for the race. That was disappointing because a finish in the Top Ten at Carthage came with the prestigious and much-desired reward of a watch.

When the gun went off I took off at the anticipated pace of a sub-5:00 mile, and hung on for 15th place overall. But the race wasn’t easy. I struggled through the middle miles as a teammate or two ran beside me offering encouragement. We finished second as a team to a Big 10 school, Northwestern University, and our top runner missed earning a watch by one place. I was glad to just get through the race, having picked up a side stitch at 2.5 miles.

A cadre of supporters had traveled up from Chicago to cheer us on. I was a bit bummed that I’d faded in the middle of that race, because the Tuesday race against LaCrosse had gone so well. Perhaps it was one too many speed sessions that week that put me over the edge. There’s always a fine line between peak performance and collapse.

After the Carthage meet, we drove back across the state of Wisconsin in a caravan of Somewhere along the way a couple vehicles ditched the bumper of our coach going on ahead.  We stopped to buy a case or two of beer. That was an insane practice of the day, drinking like mad as we came back home from meets. Even the driver sometimes imbibed, and one year I refused to get back into the car after stopping for gas at Prairie du Chien. The driver was so drunk he could not properly fill the gas tank. In that moment I took charge and hand-picked the least drunk guy, or at least the man I thought could handle his liquor the best. We made it safely across the bridge spanning the Mississippi River to MacGregor, Iowa.

There were probably six or seven times during our college cross country career when we were lucky not to have crashed and been killed as a result of such drunken stupidity. But it was the habit of the times to engage in such idiocy, and somehow we made it through.

Back on campus we cranked out fifteen miles on Sunday in two runs, then on Monday did a set of intervals: 16 X 400 at 72 seconds and under. It was getting dark by the time we were finishing up and our Top seven guys swung out across the track to run hand in hand the last 400 meters. Team unity is an important yet tenuous thing. We recognized that fact and were trying to get everyone healthy and focused for the last three weeks of the sweet season we’d earned so far.

And it was working.