Posted on February 24, 2017 by Christopher Cudworth 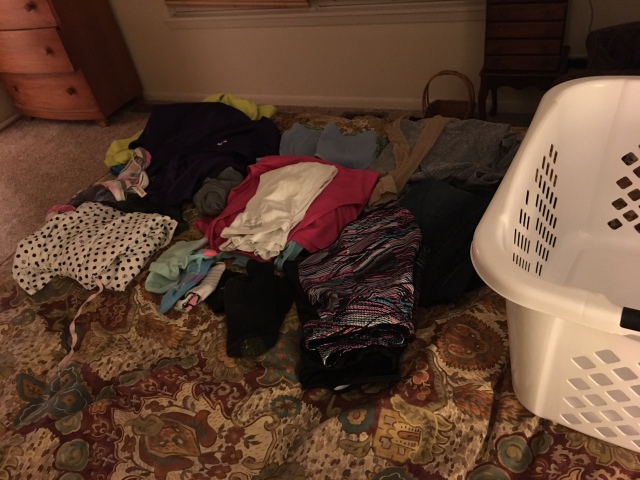 I’ve always done my own laundry for the most part. Ironing too. I’m no pro mind you. Sometimes I forget to separate the darks and lights. Things like that.

But I have learned to separate the performance running, cycling and swimming gear from the everyday laundry. Some of those fabrics don’t do well in a hot dryer. And of course I’d never throw a wetsuit in the laundry. Everyone knows you can only dry clean a wetsuit.

I’m just kidding about that.

Right now our house is shared with some of Sue’s 20-something young adults. And that means competition for the laundry space. We purchased a new washer and dryer when we moved bought this house. Each has capacity to do a lot of laundry. So we jam it in the washer and yank it out when it’s done. Then repeat the process in the dryer. In and out.

Finally, the loads make it into some sort of bin that can be hauled upstairs and spread out on the bed. For the most part, Sue and I keep our laundry separate from the kids for the reasons mentioned above.

But now they’ve all begun working out more to get fit for the weekend of May 6, 2017 when Sue and I have planned our wedding.

So now the girls have borrowed some of Sue’s athletic gear on occasion. She found a treasure-trove of sports bras in the kids’ laundry the other day. And socks. Let’s not talk about tracking down socks. Nigh impossible.

I have a few pieces of running gear that I’ve owned for more than twenty years. That might sound gross, but they are still in very good condition. Back when I received them as gifts for Christmas in the 1990s, I was a bit disappointed that there were from LL Bean and not from Patagonia. But I must admit they have lasted this long in fine style. The gray base layer has a white ring of worn fabric around the collar, but the garment still works. I know what I’m getting every time I put that thing on. Same goes for the purple midweight garment. Those two items of clothing have probably been washed 200 times each. And that’s a conservative estimate. Because that’s what conservatives love to do. Make estimates. Most of my other cycling and running gear is much newer. I’ve lear

Most of my other cycling and running gear is much newer. I’ve learned the hard way that cycling shorts have a shelf life of about two years, max. After that, they tend to show through in key spots. No one wants to see that. So I pitch them. Cycling shorts aren’t very good for shining shoes, and you can’t wear them casually to the grocery store as you might with an old pair of running shoes. Like I said: No one wants to see that. 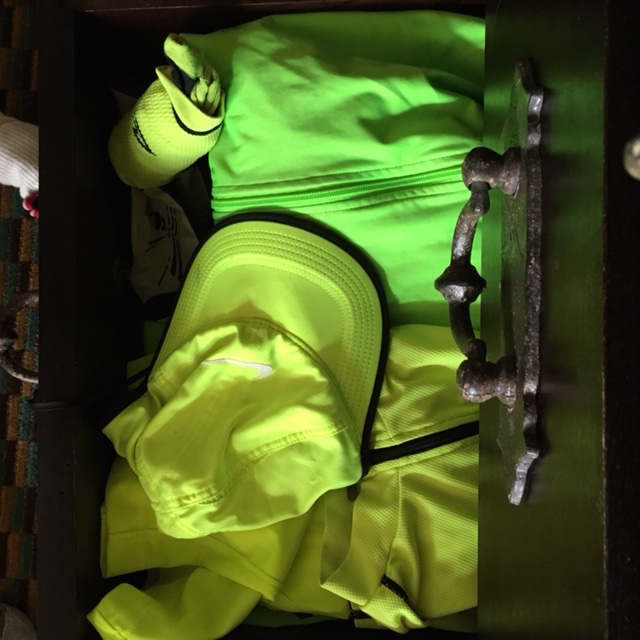 When I haul up a full load of laundry that includes gear from Sue and I, it can be relaxing to go through the laundry sorting out her stuff from mine. I will confess to the small thrill of tossing her fine little panties in their own pile. Yet that makes me laugh because the other day she rifled through her panty drawer while saying, “You know, I have all these panties and there’s only one pair that I really like for running.”

I lovingly mentioned this story to other women in our triathlon group and they all nodded and laughed. “I get that,” said our new friend Heather. “Totally,” said another woman named Emily.

Panties I’ve learned are a winsome object. They are given away as loss leaders at stores such as Victoria’s Secret. They know if you arrive with that offer to get two free panties you will not leave otherwise empty-handed. The store where I shop for Sue also employs a saucy British gal who flirts with male customers and gets them to buy all sorts of extra stuff for their wives or girlfriends. She is, in a word, the most powerful sales tool that a store of that nature could every employ. Who can say no to the offer of buying seven panties for the price of five when there is a winking British woman holding up the hip-huggers and going, “These are every gal’s fayyy-vorite.”

Helpless. But willingly so. Cause it’s fun for everyone to buy panties. They are the candy of the clothing world.

But let’s get back to laundry. Because then there comes the pile for sports bras. I’ve learned to buy them for her as well. Know her size and preference. For Christmas last year, I’d hunted down and purchased her a nice running bra from Victoria’s Secret. A few days before Christmas Eve, we were getting ready for a run and she could not find a sports bra in any of her clothes drawers. “I think it’s my daughterzzz…” she said wryly. But she was clearly frustrated. So I reached under the bed and opened a package and pulled out the warm gray sports bra with the raspberry lining and handed it to her. “Here,” I said. “Merry Christmas.”

Some of my laundry duties are far more practical. I’ve learned to keep an eye out for those frothy little bits of nylon she sometimes wears for work. You know those, right? They’re clingy little buggers that can stick to other clothing if you don’t pay attention. Then they get separated. And if that happens, they are essentially lost forever. There is apparently some law in the universe that says matching bits of nylon must be kept together or their nylon ions turn into opposite forces, like anti-matter.

I guess what I’m trying to say here is that I feel a bit of love when doing our laundry together. It makes me think of all the things she does. The running. The riding. Even the swimming. Her suit always hangs by the towels in the bathroom. She loves to swim, and that’s her second skin.

When I got home today from an appointment she’d salted all her things away in the proper drawers. Sue likes things organized and that’s why it makes me feel good to help in some small way, however I can. Life is busy and training is tough, which is why doing the laundry is one of the things I like to do, but never enough.