Posted on November 5, 2012 by Christopher Cudworth 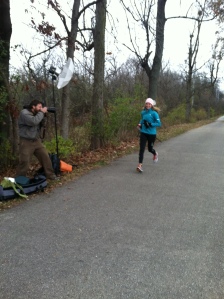 Midge Taylor-Good cruises past the 10 mile point of her Marathon to Ponder.

When Midge-Taylor Good received texted photos of cars floating in a water-filled New York City street, she had the good sense to consider that her lifetime goal of running the New York City Marathon might not happen in 2012.

As Manager of the Naperville Runner Company (IL.), a popular runner’s hub in one of America’s most active cities, she was literally in the eye of the storm when it came to Illinois runners trying to figure out whether to go to New York or stay home. “I kept looking at the weather systems, checking the Weather Channel all the time, and came to realize ‘This is not good.”

Yet runners can be a determined bunch, and even after Midge had publicly announced that she would not travel east because there were clearly millions of people at risk from the effects of Cyclone Sandy, she overhead people questioning her choice. “It was difficult not to go,” she admitted. “I had committed to pace one of the gals to a 4:00 marathon, and we were really looking forward to it.”

It was a difficult choice for everyone who had signed up to run. There were all those training miles to consider, the thrill of competing in such a big race and of course the money it cost to fly, stay in a hotel and eat while prepping for the race in the Big Apple.

Then “Hurricane” Sandy blew through New York and all those factors were thrown into a new algorithm. Would the race even be held? Would the atmosphere be the same? Is it right to run in an athletic event in a city devastated by a natural catastrophe?

“For me, it became more of a moral thing,” Taylor-Good confessed. “So I started making different plans.”

Bringing the marathon back home

Once she made up her mind not to go to New York, a window began to emerge for a completely different venture. While running 10 miles with a friend on the Friday of what would have been marathon weekend, she began to realize that she wanted to run a marathon anyway. She planned a 26.2 mile course starting and finishing in her hometown of Batavia, Il., using the Fox River Trail as her course. The route she picked swung north through the towns of St. Charles and Geneva and south again all the way to Aurora and back. Weaving together long stretches of the trail took some planning, but the Fox River Marathon held earlier in September provided some foundation for her  chosen course.

Her initial plan was to run on Sunday, the same day as the originally planned ING NYC Marathon. That itinerary suddenly changed. “One of our employees had a death in the family, and they could not work Monday. I was thinking to use that day as sort of a recovery. That meant the logical option was Saturday, so I could recover on Sunday and be back at work the next day.”

With all those changes, her thoughts were mixed going into the solo marathon. Then a friend entered the picture and told her, “You know what? You need to learn to run happy.  Let this run be its own goal. Take pictures. Stop your watch now and them. When something comes up, just go with it.”

And Midge Taylor-Good did just that. She even started the day by eating waffles instead of her morning marathon routine of instant oatmeal with brown sugar. 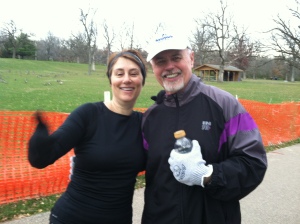 Her friends Tom and Diane Cleary met her during the run.

“It was wonderful from the start,” she says. “There was no anxiety. No nervousness. I started north to the Japanese Garden at Fabyan Forest Preserve and right away I bumped into some friends, Tom and Diane Cleary. I wound up talking to them for 20 minutes! They just loved the concept and it seemed strange for me to stop, but it set the right tone.”

She continued north to St. Charles, crossing the newly completed bridge through Island Park in Geneva. “It had been closed all summer, one of my favorite parts of the running trail. So it was neat thing to cross over to the rest of the course.”

As she proceeded, it became evident her plans would require some modification or adaptation as it were. “None of the bathrooms were open,” she chuckled. “And all the drinking fountains were turned off.” 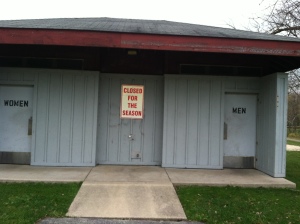 Catch 22: Finding water, and bathrooms, was a challenge in early November.

Her first stop was the Starbucks in St. Charles, but she realized they weren’t too keen on runners using their facilities that way. So she moved over to the Ginger Root Salon where she gets her hair done. “I talked with the gal who cuts my hair and she said, “You’re nuts!” but it was right at the 10k point and I told her, “I’ve got exactly 20 miles to go now.”

Squeezing in a little shopping

Swinging back south, Midge Taylor-Good decided to run by the stores on Third Street in Geneva. Each time she made a stop, she’d stop her watch too. Once she’d completed a section of her happy wandering, she’d return to the spot marked by her Garmin watch and continue on her ‘marathon’ course for the day.

At 10 miles she approached a pair of photographers working on a project for, of all publications, Trail Runner Magazine. They stopped her and asked if she would work with them on composing a few shots.

“So it was just like a real marathon,” she chuckled, “with professional photographers and everything.”

As she continued south, consuming nutrition gels on a schedule that would see her to the finish, water and bathrooms were still an issue. At one point she needed to get creative. “I peeked into the North Aurora Fire Station, (before I had an emergency…) and I could see they had a water fountain and a bathroom. So I used their facilities and kept on going.” 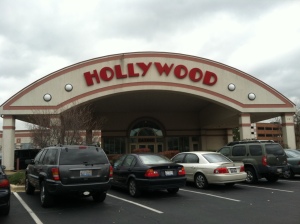 She decided not to press her luck by stopping at the Hollywood Casino.

Her course took her down to the Hollywood Casino in Aurora. “But I decided not to stop and play the slots. I didn’t want to press my luck.”

To her own amazement, she was surprised at her own ability to pause during such a long run and go back to running without too much problem. “Your body cools down, of course.  But one of my friends said to me, ‘This proves you’re an ultra-runner.’ ”

All the while she ran, Midge Taylor-Good kept up a stream of texts to friends and family. One of her daughters checked in with her mother by texting “You’re my hero, mom!”

A dizzying start to the year

The back story to Taylor-Good’s triumph is that she had experienced some strange health challenges earlier in the year. During an airline flight, some sort of viral bug made its way into her inner ear producing a vestibular infection. Worse than motion sickness, the affliction vexed her round the clock, producing nausea and vertigo. Initially her doctor misdiagnosed the condition, prescribing medicine that essentially made her condition worse. “I couldn’t even watch TV, or look at bright lights, it was so bad.”

It took weeks to get over the problems associated with the infection, so to be able to run again was a real joy. “But honestly,” she admits. “It occurred to me that this might be a sign to slow down a little. Heed what my body is telling me. I tend to live everything at a fast pace, even a panicked pace at times.”

Putting it all in perspective

Having already run 18 marathons in her career, it wasn’t like missing New York was going to cut her life goals in half, or completely ruin any bucket list.

Coming back through Red Oak Nature Preserve, she stopped to snap photos of a sign along the trail. “The employees at work all call me the Wise Old Owl,” she chuckles, “because I’m much older than many of them. And here was this photo of an owl staring back at me. So I sent it over to show them I was thinking about them.”

It turns out there was an ‘office pool’ of employees trying to predict her time for the marathon. Taking out time for her pleasantries, necessities and wanderings, Midge Taylor-Good took 3:47 to complete the 26 miles. “It took me 5 gels and 3 10 oz. drinks of water,” she said with satisfaction. Her plans had gone well. Technically, she actually ran 28 miles, 2 miles further than the official marathon distance. All her stops for fun and contemplation raised her total time of “marathoning” to just over 5 hours. But it was worth it.

A Sense of Wonder

“I saw the Fox Valley in a whole new light,” she says.  “I mean, I kind of took whatever came along, and enjoyed it. My husband told me, ‘What you did was nuts. Running 26 miles solo and stopping and starting like that.’ But it felt good to run without a timing chip on my foot. It turned out to be journey as well as a race. There was no sun to contend with, so the weather was perfect. And no heat. I did get chilled a couple times but that didn’t stop me.”

Midge Taylor-Good feels blessed to be living a life she enjoys with family and friends, and working 10 years for Naperville Running Company store owner Chris Hartner, who she labels the best boss anyone could ever have.

It truly was a marathon to ponder. The fact that it was not run in New York City is now an afterthought. Because life goes on. The day after her marathon journey Midge Taylor-Good rode her bike 20 miles to recover, and on Monday she goes back to work in the running store she loves, helping other people find their paths to enjoyment and success. 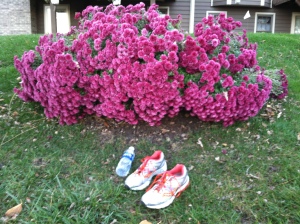 At the end of her 26.2 mile sojourn, Midge Taylor-Good sat down next to the giant purple mum plant where her marathon began. Her shoes were off and the sense of satisfaction was sweeping over her when another runner stopped to ask if she was okay, and what she was doing. “I just finished a marathon,” she told him. “I ran it on my own.”

The runner plucked one purple mum from the giant plant and said, “An accomplishment like that deserves a flower,” he smiled. Then he continued on his run.

She admits the gesture brought a tear to her eyes. But so did almost everything she did that morning. Missing the New York City Marathon turned out to be a peak experience she will not soon forget, and a marathon to ponder her whole life.

2 Responses to A New York City Marathon to ponder