One for the Birthday Girl

Posted on August 18, 2017 by Christopher Cudworth

In May of this year, I married the woman I met through FitnessSingles.com. If that sounds a bit cold or commercial, be assured the story behind our relationship is much warmer.

Sue and I were both going through considerable life changes four years ago when we met. During our first date, she chuckled and said, “I hope you don’t mind dating someone who is unemployed right now.” Well, I’d had enough experience in that category myself to know what it’s like to be working for a new job, exploring options and earning your way back into the workforce.

She is a talented project manager and an architect by trade. So she dug into fields where her talents would best fit, and wound up with two strong opportunities. To make her decision, she went for a four-mile run and told me later that night, “I know which job I want to take.” I thought to myself, “This woman is a lot like me.”

The job has turned out to be great, and she recently moved into another role with the same company. Life (and triathlon) is all about transitions.

On the second week that we were dating, I drove up early on a Saturday morning to watch her do the Racine Half-Ironman. She linked me up by phone with her sister Julie, a breezy counterpart for the day, and we shared histories while sitting in the sun and shade as Sue competed. Julie is a cancer survivor who also competes in triathlons. The two sisters would ultimately complete their first Ironman race together in Madison two years later.

I began training with Sue of course. That was one of the reasons why FitnessSingles was a solid option for us both. We wanted someone with similar interests. It has turned out to be the case across so many fronts.

The miles on the bike and on the run were a bonding force. Some of those days were hard and long. Weekends spent in Madison training on the hilly Ironman course tested both our characters. We also did Horribly Hilly together, and it was not Sue’s favorite weekend in athletic pursuits. At one point I commented, “This is such a pretty valley,” and she blurted. “Yeah, well, it just means we have to go back up again.”

What a perfect symbol for so many things in a relationship. There were weekends where I did not feel my best either. She is a strong rider and sometimes I could simply not keep up. That meant we needed to develop a fair and honest dialogue to cope with our ‘in the moment’ differences. That too is a symbol for how relationships grow and change.

What I found in Sue was space to think, change and breathe. She is a strong woman who does not wallow in past difficulties. Acknowledge the change. Learn from it. Embrace what you need. And keep moving. Above all, share love and memories with those close to you.

And sometimes, with strangers. We both like meeting new people. Petting dogs and going out to dinner. The meat of life.

Through it all we keep changing. That came in handy when the time arrived to get married and consolidate our housing arrangements. Clearing out the house where I’d lived for 20 years took both a forceful determination and a patient will to capture and keep significant items that my children and I wanted.

Yet that was the same year I cleared out my father’s house after his passing. So it was the end of a long two weeks toward the end of that process. Sue saw up close how much it had drained me. On the final night before turning over the house after thirteen hours of work filling dumpster and carting boxes out of the place, she got me home, fixed me dinner and laughed when I could not even lift the fork to eat some green beans. “You’re done,” she laughed. “It’s time for you to get to bed.”

I saw her in the same state for different reasons. During her Ironman year, things kept going wrong. Some were little. Some were big, including an incident in which an Escalade driver ignorantly parked herself in the middle of country road forcing Sue to ditch her prized Scott tri-bike to avoid crashing into the white hulk blocking her way. The bike was trashed due to fractured rear struts. That forced Sue to substitute bikes. One training ride in Madison turned into a desperate slog. But she got a new bike at virtually the last minute…

And she transcended all that to finish her Ironman in Madison. I ran along next to her crying tears of thanks and joy. What an example of perseverance! She’d accomplished her goal. “It wasn’t the day I wanted,” she smiled as she headed to the chute. “But I’m gonna be an Ironman.” 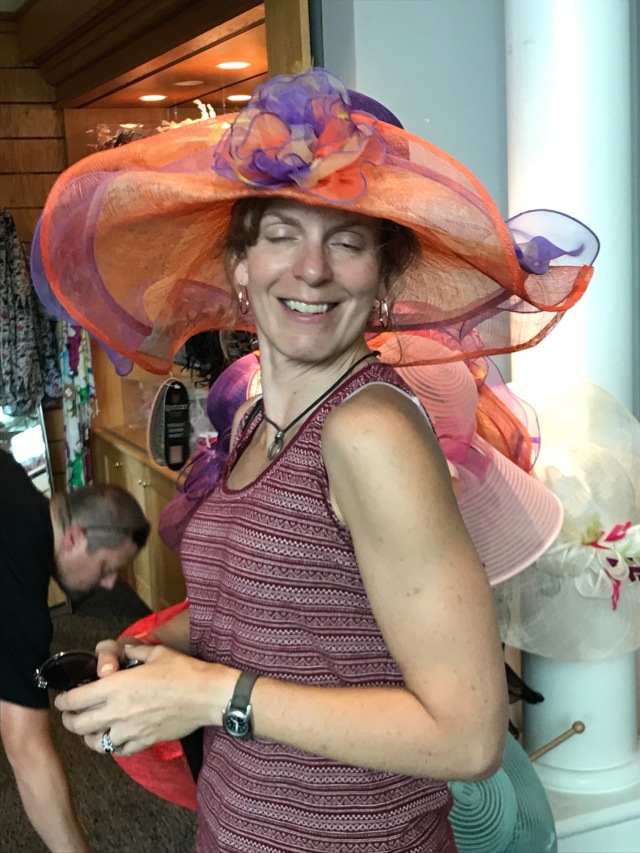 We’ve learned so much together and had so many moments of laughter and joy between. Our children have gotten to know each other and our families have blended into a support system all around. From loss has come gain. And from gain we draw hope.

For me, the changes have helped me regain a training mentality, and I’ve even learned to swim, for God’s Sake. That has taken two years, but the challenge has been wonderful to engage. Sue recently tuned a couple things in my “catch” by watching me from the next lane over. She’s a swim coach but not directly in my case. I swam the 800 meters at the Holidayman Triathlon with ease. I feel like we accomplish these things together.

Which is why every birthday is significant in our lives. Birthdays are for an individual, but they are meant to be celebrated together. I love this woman because she knows all this, and more. She is training for her second Ironman and had a strong performance in the Steelhead 70.3 last weekend. It is fun to be her companion in this, and her kids are likely going to join us to watch her compete in Louisville.

So it’s Happy Birthday to you, Sue. We all love you and wish you the very best.

Christopher Cudworth is a content producer, writer and blogger with more than 25 years’ experience in B2B and B2C marketing, journalism, public relations and social media. Connect with Christopher on Twitter: @genesisfix07 and blogs at werunandride.com, therightkindofpride.com and genesisfix.wordpress.com Online portfolio: http://www.behance.net/christophercudworth
View all posts by Christopher Cudworth →
This entry was posted in 13.1, competition, cycling, swimming, training for a marathon, tri-bikes, triathlete, triathlon, triathlons, We Run and Ride Every Day and tagged happy birthday to sue astra. Bookmark the permalink.

2 Responses to One for the Birthday Girl