Posted on November 14, 2016 by Christopher Cudworth

The truth about running half marathons is that you really should train for them. That was evidenced by the performance of my fiancee Sue, who ran with confidence and decent cadence for all 13.1 miles of the race in Madison, Wisconsin. Her coach Steve Brandes at Madison Multisport was there to urge her on.  He was helped in the job by the most adorable puppy ever brought into this world. She is called Cedar after some high mountain trail the coach had climbed. And during our introduction, while talking to her coach, the puppy settled down and leaned on Sue’s leg. That little bit of warmth was welcome 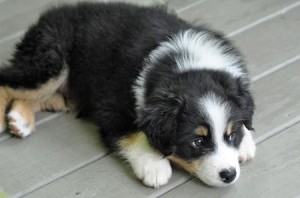 because the temps were still stubbornly stuck in the high 30s. A steady breeze from the north was keeping it that way.

It can be tricky to dress right in such conditions. Layering up so that you won’t stiffen up is important. But then you come to the starting line like I did to find some gal in a strappy little top sporting bare shoulders and arms. Or the gal in the short little bun-huggers that stop at the crack of her ass and you think to yourself, “I’m not so tough.” But it’s not really acceptable for men over 50 to wear raspberry colored bun huggers in a race, so that trend can be passed over without guilt.

As it stood, I was dressed in all black with compression socks holding my calves together. That was necessary because I’d done a little test run the weekend before the race and things turned a little sour at about eight miles of the scheduled ten-mile run. My plan was to examine even the prudence of attempting a half-marathon given my dearth of steady training this fall. The complete absorption required to move the goods out of the house where I’d lived for twenty years basically erased both the desire and time to run at all. Yet I’d traipsed through a 10K at 7:30 pace without much problem despite this gap, so the idea of adding another 10k onto the back of that didn’t seem so bad.

Unfortunately, I tweaked a calf muscle in the process. Perhaps it was overstepping my training load during that 10-miler, or perhaps it was the ebullience of tossing on that bright new pair of Nike Floaters or whatever the hell those new shoes I bought are called. At any rate, during a three mile run on Wednesday, my lower calf cramped right where the sheath to the Achilles tendon begins. I’ve had that injury before, many times. It first happened during my days as a steeplechaser in college. The angle of your foot when landing on the inclined pit would often strain my calf. That doesn’t heal up quickly, I can tell you.

I tried everything I knew how to do in order to heal up the calf. Yet deep inside I knew that by a certain point in the race, and there would be no predicting when, it would be game over. 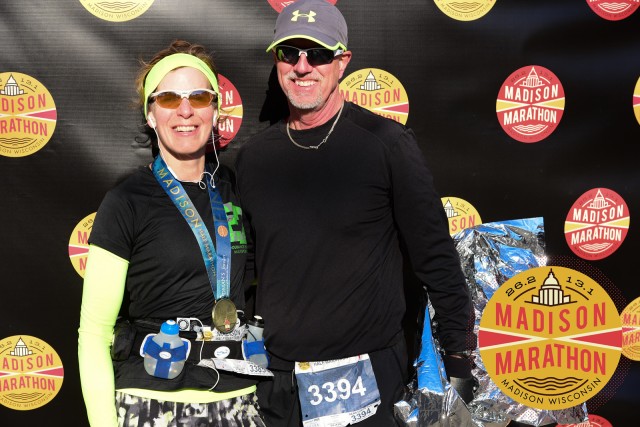 My hunger to enjoy the race was sufficient however, to start. It’s still exciting to step to the line with all those people and glance at your watch when it reads 00:00:00. All those zeros are possibilities, you see. That’s the fun of running a race. You feel alive.

The course at Madison is both urban and beautiful at the same time. Starting at the Capitol building (better known as Governor Scott Walker’s Playhouse) the race heads across the land bridge between Lake Mendota and Lake Monona. I’ve swum now in both those lakes, which are elegant bodies of water in any season. In November however, one can accept the idea that swimming would not be such a good idea.

And perhaps even running was a dumb idea for me. During warmups at a very slow pace, my calf did not hurt much. I started the race modestly enough with the goal of running 8:00-8:10 miles if the leg allowed. And sure enough, I drifted through the first mile at 8:11. But there was a twinge every step that I took. My hope was that the leg might suddenly like the additional extension of a quicker pace. It’s happened before with injuries. A couple years ago when Achilles problems vexed me it was possible to still race at a decent pace. I figured out eventually that it was the angle of the heel counter in the shoes I wore that was causing me pain.

Mile two went by at 8:10. Mile three at 8:10. I was rolling along with absolutely no effort. 24:30 at three miles and hoping it would get better. But every step hurt, and I knew that was not a good thing.

There was another challenge, and that was hills. Up and down we went. I felt fine on the flats but the downhills, in particular, were a problem. This made me a bit sad. I was having fun in the early goings and looking forward to the bigger climbs out at mile 8 and 9.

It was not to be. Through mile four the leg began to tighten toward the point where it might outright spasm despite the fact that I’d run yet another 8:10. Well, that was fun anyway. Somewhere before mile five though, I turned around and started jogging back in the direction where all the other runners were coming.

I envision that this is a bit like what happens when we die. Our souls pop out and start going backward in time. We get a chance to review our entire life before going off into whatever we call heaven, or hopefully not hell. Through time we travel going, “Okay, that was cool,” and “I remember that asshole. He was a pain at work.”

And so on, all the way till we get to the part where we’re pooping our own pants and eating creamy shit our mothers dish into our mouths. Then we suck right up into the Eternal Vagina and pop out in some other dimension completely reborn as some awesome spirit thing with an extra hand to hold our cell phones while we drive.

Okay, so my mind wanders a bit when the race is over for reasons other than getting a finishing medal. So I flagged down a Sag Wagon and it turned out the woman driving it was once coached by the wife of Sue’s coach Steve Brandes. Her name is Cindy Bannick. She’s a top-flight triathlete in her own right, and now co-owner of the cutest dog on earth. Both Steve and Cindy are multi-sport coaches in one of the Multisport Capitols of the World.

So it was a nice warm ride back in the Sag Wagon. I haven’t been in one of those for a long, long time. Other than that ambulance ride after the bike wobble incident three years ago, I’ve been able to avoid, for the large part, the DNF.

Once back in Madison, I fueled up with the Panera Bread lunch and grabbed a Mylar blanket. Then I started walking around the Capitol Square trying to find the street that led to the parking garage. And damn if I could not find it. The problem with Madison is its combination of the strict linearity of its town square combined with a panoply of angled streets feeding into the perfect square where the race started and finished. So I made several laps peering down streets trying to see our parking garage to go change into warmer clothes, but my mind kept playing tricks on me.

Oh well, I just wrapped myself in the Mylar and found a cubby hole next to a bank out of the wind and in the sun. That’s where I waited for Sue to finish, because she was having a good race (I’d seen her when I turned around at five miles) and I did not want to miss her finish.

She was excited, even thrilled at the feeling of this run. Her training had given her both the strength and confidence to run without fear. That’s key at the longer distances, and when she goes to apply this training in combination with the cycling and swimming, it’s going to be fun to see her progress.

As for me, I’ve decided that actually training for some of these races might be a good idea. I can accept that. I actually used to train for races. Kept a journal and everything. Maybe it’s time to get back to basics. But perhaps not as basic at that Red Roof Inn where we stayed the night before the race. That’s going too far.