Posted on November 16, 2016 by Christopher Cudworth

As I was riding out of town on the 15th of November, bathed in late afternoon sunshine and only slightly chilled by temps near sixty degrees, a feeling of gratitude swept over my soul. The ride was smooth even if I was out of riding shape. When that happens, it feels like my legs are too thin to propel me at the speeds possible last summer. The muscle built

by long, hard rides goes somewhere else. Into the twilight zone of autumn.

That how all fitness comes and goes. We peak for seasons when the weather is accommodating, then make the best of it in the off-season. Sometimes we can’t tell the difference between building up our base and just managing to recover.

That’s the real twilight zone of the triathlete’s world. In the void after the real competitive season, we break off into other ventures like simple old road races. These might consist of half marathons or even crazed ventures such as the 31-mile race on the Chicago lakefront that a couple gals I know ran early November. They jumped into the race on the heels of completing an Ironman just this September. The race made them sore so that when they had to hobble up the stairs to our balcony seats at a recent Postmodern Jukebox Concert, it all must have felt surreal in some respects, like this video of Puddles the Clown singing in his Pity Party with those great musicians in PMJ.

I’m not claiming to be as brilliant or talented as that clown. But some might say that Puddles acts and looks like all of us liberals blubbering their eyes out at the prospect of a Donald Trump presidency. I’ve done my share of protest online including this article titled “When Trump says “You’re Fired” America.

Yet as I rode west this afternoon I spotted a roadside display that made me want to stop and pose with the main character. So I lay down next to a pile of gourds and pumpkins with my helmet still on my noggin. Because perhaps I’m a bit more like a character from that XTC song titled Peter Pumpkinhead.

See, being called something on the order of a Pumpkinhead is not always an insult. Sure, there are those who take it literally, insinuating that anyone who is a pumpkinhead must be stupid. Scoop out the brains and what do you have left? A bunch of crunchy seeds that taste good with a little salt on them. Those of us with liberal beliefs are accused of having mush for brains on a regular basis. 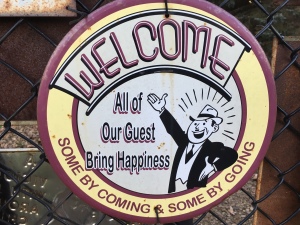 But when you grab hold of the allegory and give it a different shake, we find that person who is a pumpkinhead can also be someone who innocently encounters the evils of the world and reveals that many supposed strengths are actually the true weaknesses in this world.

Because through their seeming ignorance, pumpkinheads actually point out the errors in thinking by those who think they know the secrets of life when in fact they obscure them by relying on their very literal take on things.

One might point to the epochal character of Forrest Gump to better understand the Power of the Pumpkinhead. Gump exemplified the powers of pumpkinhead common sense in action. “Stupid is as stupid does,” he once said.

Jesus Christ also admirably painted himself as a sort of pumpkinhead at times. It was his method to seemingly play a little dumb at times. Instead of answering questions asked by religious leader in literal fashion, Jesus often responded with seemingly simple, dull questions that in fact stumped his political, intellectual and theological opponents.

It was also the method of Christ to demonstrate weakness in the face of those claiming earthly strength. This always called the false notion of authority into bold relief. Almost without exception, his politically powerful opponents took his weakness as a sign of contrition to their earthly power. It was, in fact, the opposite. 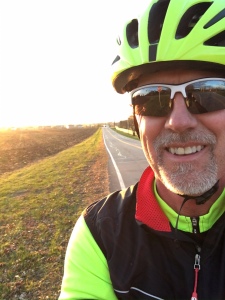 That’s how the pumpkinhead side of liberalism actually works. People who stand up for “pie in the sky” ideas such as human equality can seem a little simpleminded in what they say to promote the cause. Mahatma Ghandi once said: “Gentleness, self-sacrifice and generosity are the exclusive possession of no one race or religion.”

That statement seems so simple. Yet there are those whose religious doctrines absolutely prevent them from accepting truth in that context.  The Christian faith and Muslim faith have both been known to claim the status of the one true religion.

But pumpkinheads simply don’t accept that possesive brand of thinking. And that wise little pumpkinhead Mahatma Ghandi also said “You must be the change you wish to see in the world.” Which calls us liberal pumpkinheads to stand up to false authority even if it makes us look like the dumbest people in the room.

It’s a different (and often difficult) path to choose. And as Ghandi notes, there is ridicule that comes with that territory. “First they ignore you, then they laugh at you, then they fight you, then you win,” says Ghandi.

To try to win the fight, cynical people will brand you a bleeding heart or a tree hugger. But most of all, you will be called  A Fucking Liberal as if that label were an insult.

But in fact, all those seeming insults are actually terms describing people who actually fucking care about others. Liberals give a fuck when other people are getting the shaft. Too much of the world is obsessed with how much money they can hoard, or who has to pay their goddamn taxes to support the country. Jesus didn’t give a goddamn about all that. He specifically said to “store up your treasures in heaven.”

That is where the liberal heart of faith truly resides.

And let us consider another stanza from the song Peter Pumpkinhead, in which the songwriter imagines what a latter-day figure such as Christ might experience in this world if he were to come around again.

Peter Pumpkinhead was too good
Had him nailed to a chunk of wood
He died grinning on live TV
Hanging there he looked a lot like you
And an awful lot like me!

This same brand of treatment holds true for liberals who claim to be patriots. Yet absent the brand of pseudo-militaristic trappings of aggressive, creed-driven, flag-waving patriotism, some people think it doesn’t deserve the label of “patriotism.”

But actually standing up for the rights of other involves far more than waving flags and posting yellow ribbons wherever veterans show up in our culture. True patriots instead put their personal brand on the line without fear. They put country before self by advocating for the oppressed elements of society. That is the mark of a true patriot.

All these things ran through my head during my Peter Pumpkinhead ride today. I’m more than willing to admit that my liberal side seems a bit daffy and worthy of ridicule at times. But that’s also what makes me want to go out and share the road while I run and ride, to see the country together. There is nothing so equalizing as the feel of the wind blowing through your soul.

I’m proud to be a Peter Pumpkinhead with all my softhearted flaws. I’ll lie down with my fellow pumpkinheads any day of the week. And I have the pictures to prove it.

Christopher Cudworth is a content producer, writer and blogger with more than 25 years’ experience in B2B and B2C marketing, journalism, public relations and social media. Connect with Christopher on Twitter: @genesisfix07 and blogs at werunandride.com, therightkindofpride.com and genesisfix.wordpress.com Online portfolio: http://www.behance.net/christophercudworth
View all posts by Christopher Cudworth →
This entry was posted in cycling, Uncategorized and tagged cycling, liberalism, peter pumpkinhead, xtc. Bookmark the permalink.