A moment’s notice can save you pain

Posted on April 12, 2016 by Christopher Cudworth

FIRST: Apologies for glitches in yesterday’s column. It was written through hotels and airports and I pushed PUBLISH just before jumping on the plane. WordPress sometimes flips cut or pasted copy back into place. But there’s no excuse for typos and busted sentences. I appreciate your readership and promise to do better.

Okay, that’s out of the way. Let’s live in the moment…

There is an element of risk in everything an endurance athlete does in sport. You step out the door for a run or a ride, or dive into a pool, and there’s a risk that something won’t go right. We go seeking peak experiences and find ourselves at the bottom of a ditch.

One of our group of riders had a fall during the mountain biking day out west. He was having fun charging around the single track, darting between cactus and jumping little hills when the trail turned and he went down in a sliding fall.

Having taken a fall on a bike myself a couple times, I knew how he felt afterwards. His arm was wrapped in a makeshift sling made from my shirt. Then he walked back to a flatter section of trail and then pedaled the bike home in the company of the trip leader.

Everyone felt bad about the crash. But I looked at the trail and concluded that a crash of some sort was inevitable at that point. The trail turned sharply left and featured a deep fallaway to the right. There was no way to see it come behind a big chunk of shrub. In other words, it was unavoidable. Had it not been him that feel, it could well have been me or someone else in our group.

Accidents sometimes happen without notice. One second you’re fine. Next moment, you’ve crashed. Some accidents are painful, but temporary. Others can reap permanent damage.

While running I once hurdled a chain blocking the entrance to a forest preserve and found black ice on the other side. Down I went, landing hard on my wrist. Nothing broke, but it took six full months to heal. And gosh did it hurt those first few weeks. I was grateful no bones were broken.

I was not so lucky on the bike in 2013, crashing due to bike wobble at 40 mph. My collar bone has a nice zipper scar where they stapled a plate to hold the bone together.

It’s just as easy, I must assume, to find calamity in the swim. My own little moments of panic arrive whenever I miss a breath and notice a clamped feeling in my chest that says I need more air. Now.

There will come a time this year when I try an open water swim. I’ve already decided my first attempt should come in segments. Just a quarter mile at first. Then a half-mile. I’m not ashamed of this caution. Calamity can and does happen with a moment’s notice. Overcoming that fear must be done with brains as well as muscle.

Two summers ago I ran head-on into a fallen tree across the path because I had my head down thinking about something other than the fact that I was pedaling along at 20mph. The scar tissue took two full years to disappear.

It’s also possible to ride right through a red light if you’re not paying attention. I’ve almost run into a few parked cars. City cyclists need to watch out for people opening the car doors.

Last summer my companion Sue was forced to lay the bike down because a woman turned her big old Escalade into her lane and basically parked it there. Sue came out of the incident with only bumps and scrapes.

Erring on the side of caution

I share all this because I wish you all safety as you run, ride and swim. That’s the first rule of enjoyment in these sports. Give yourself a moment’s notice as you go about your training business, and racing too. It’s an exciting thing to tackle the challenges we set out to do, but there’s no sense in letting harm come about because you mistakenly assume there is no danger.

That is not to promote fear, but wisdom. Our cycling out west was safe on the roads and the trails because people communicated. For the most part, we kept to the practice of hand signals and voiced warnings about slowing or stops. We rode more than 110 miles of Arizona roads in two days and it was fun. 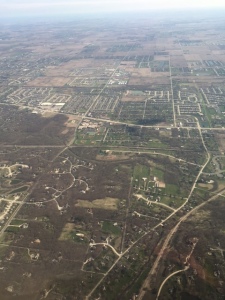 The more I ride these days, the more I err on the side of conservative habits. If I try to beat a green light before it changes I keep an eye out for cars trying to do the same from the other direction. I run against traffic and often step well off the road to avoid a line of oncoming cars whose drivers might not see you.

Some of that sounds like common sense. Yet it’s easy to lose common sense when you are absorbed in the moment.

At one point in the middle of the longer ride this weekend the ride director sent a few of us ahead so that he could keep an eye on the group as a whole. “It’s nine miles downhill from here to the next town,” he told us. “You can average 30mph quite easily.”

But the wind was in our faces. So we rode hard with a good rider in the lead to start. Even in a hard combination headwind/crosswind we kept the pace at 26-28 hour. Then I offered to pull. Every quarter mile or so there were driveways and the inevitable skree of gravel to avoid. I signalled to move out well before we reached each section of gravel. And when my two or three pulls were over, I slid into second and signaled even harder when danger approached.

And that made a potentially dangerous ride segment a lot safer. We didn’t slow down or give up the idea of riding hard. We just used common sense as a matter of course.

Perhaps we all need to think of our endeavors in hindsight before we go out and do them. Does riding hard on heavy traffic roads really affect our average speed that much? And what difference does it really make if you ride a 19.9 average or a 20.0? Our obsessions with supposedly empiric evidence (and our perceived superiority) is the true delusion.

I humbly suggest you do the same. And I sincerely wish my riding companion who fell during our mountain bike excursion a speedy recovery. He loves riding and does a good job. He just loved it a little too much. He’s finished an Ironman and has seen so much improvement the last few years. He got married to a wonderful gal as well a couple months ago.

He was apologizing to all of us for the fall. But we all know bad things can happen with or without a moment’s notice. Here’s hoping this little reminder can help you in advance avoid calamities large or small.

Christopher Cudworth is a content producer, writer and blogger with more than 25 years’ experience in B2B and B2C marketing, journalism, public relations and social media. Connect with Christopher on Twitter: @genesisfix07 and blogs at werunandride.com, therightkindofpride.com and genesisfix.wordpress.com Online portfolio: http://www.behance.net/christophercudworth
View all posts by Christopher Cudworth →
This entry was posted in Uncategorized and tagged cycling, cycling safety, hindsight is 20/20, running, running safety, swimming, swimming safety. Bookmark the permalink.