On the questions raised by a pair of wheels

Posted on April 15, 2014 by Christopher Cudworth 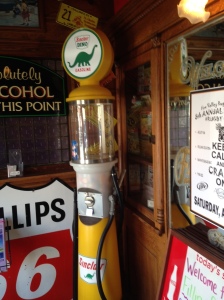 Recently I dined at the Filling Station, a restaurant that features American memorabilia in its decorations. Inside the store were some of those classic pumps that once showed the gasoline you were pumping into your vehicle.

Outside the place hung a giant Sinclair sign. And it struck me how much our lives have changed since the innocence of those happy dinosaurs and 1960s mentality toward gas-guzzling cars and trucks.

Having recently been invited to attend a class at the Lutheran School of Theology in Chicago in which the subject was global warming, the subject has been on my mind ever since.

I drive a Subaru that is ostensibly as emissions neutral as it can be. Auto emissions have been cut quite a bit since the 1960s and 70s when smog was gacking up the air in almost every major city in America. Yet cars aren’t our only atmospheric problem. We burn all kinds of fossil fuels from oil to coal and it’s all been going on hot and heavy for the last 100 years or so since industrialization became the foundation for the world’s economies.

It wasn’t so long ago that activities such as farming and trapping drove America’s economy. That’s just 250 years ago, which isn’t even a blink in time when you come to think about it. There are toilet holes in castles much older than the American Republic. 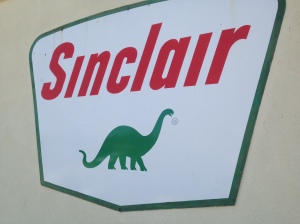 And yet we’re the ones who drove all this forward. We invented and popularized the automobile. At the same time we cranked up airplanes, then jet planes and finally rocket ships to the moon. America is one big smoking engine of a place.

The technology we’ve exported to the world is both wonderful and terrifying. We’re the tarsnake of the world, a great blessing and a horrible curse all at once.

We can’t even make up our mind if all this technology and the science that drives it is even real. There are millions of Americans who apparently believe that human beings once c0-existed with dinosaurs like Tyrannosaurus Rex and Velociraptors. The movie Jurassic Park didn’t help things much. It brought that strange psuedo-Christian fantasy to life on the big screen. And if it happens in the movies, why can’t it be real? Wasn’t the move The Ten Commandments how things actually happened?

I so recall the innocence of the Sinclair dinosaur signs at gas stations across the East Coast where I grew up. I basically believed that melted dinosaurs turned into gasoline. Sure, it was a bit naive. But it was kind of cool thinking about all those brontosaurs making my dad’s 1965 Buick Wildcat go so fast.

Surface beliefs like that are innocent only so far as they don’t actually inform public policy. Yet that level of understanding seems to be acceptable to millions upon millions of Americans who take a literal view of the bible quite seriously. It’s so naive as to be dangerous, yet it has proven sufficient to fund a Creation Museum in Kentucky that has turned all sorts of crazy claims about biblical literalism into a moneymaking enterprise that is basically based on deceit of the tallest order. The entire premise of the museum is that science as we know it is wrong. Only the Bible can tell us truth. The motto of the Creation Museum is “Prepare to Believe.” What’s a motto? Nothing, what’s a motto with you? (The Marx Brothers).

So it kind of makes you wonder if it is going to be possible to convince so many literal-bible-believing Americans that global warming is really a problem if they can’t even grasp even the basic science behind the origins of living things and how the world actually came to work like it does. Because when you think that dinosaurs died off completely in the Great Flood, then how could you possibly think that the stored energy in dead carboniferous materials could contribute collect in the bedrock of the earth’s crust. Oh, right. That Flood thing again. The Flood did everything we see geologically, you see. It’s that simple. Right.

And if there’s no connection to be learned from the carbon fuels we’ve dug up and burned with the condition of our atmosphere and the potential demise of the human race, then there’s no logic to taking any measures to curb carbon pollution.  If people refuse to understand the geological processes or time necessary to produce fossil fuels in the first place, they definitely cannot imagine what those forces of nature can do the world in the future.

That whole scenario is simply unimaginable for two types of people: Those who don’t get science and those who choose not to accommodate it for reasons of economic convenience. Working together, that cartel forms a wicked combo. Religious people with a worldview they seek to defend and rich people with the means to debunk legitimate science are a damned dangerous alliance.

And that’s where we find ourselves in this modern age.

So you can imagine there is not too much sympathy either for people trying to make a simple difference by riding their bikes to work, or running to raise money for preservation and conservation. People are active every day doing some small part in trying to reduce the impact the human race has on the world around us. But thanks to the selfishness and lack of concern on the part of so many, we keep running into trouble.

In fact too many people believe the world is not even worth saving because only God could destroy. Or they believe that the bible says the world  can’t be saved at all.

So it’s hard to reconcile the seemingly oppositional worldviews of people on opposite ends of the science and truth spectrum, isn’t it? No wonder America is so divided. 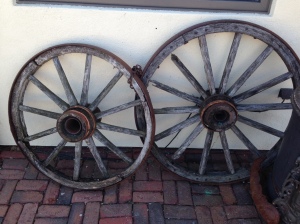 Yet there are people trying to make a difference in our collective understanding of the world as it is. And that’s why I attended the class on global warming at the Lutheran School of Theology.

Because instead of viewing the issues of religion and science as irreconcilable opposites, there is a movement to make sense of the Bible in context of science and what our values have to do with the way the world works, and doesn’t.

But it’s hard work. It’s as if we’re trying to take people from the age of wagon wheels to the age of (somewhat ironically) carbon bike wheels in one fell swoop. There is a lot of stubborn resistance by the people who view themselves as stalwart patriots and pioneers of the REAL America, to steal a phrase from Tea Party and the likes of Sarah Palin. Their stubborn anachronism is now tied to a brand of patriotism that is anti-intellectual, anti-science and anti-progress. So it seems that dinosaurs really do still exist among us.

Consider that one of the interesting concepts in the class I attended at the Lutheran School of Theology was a term scientists have invented to describe our position in history. They call this the Anthropocene Era. That is, this is the age in which we’re at risk from extinction through the influence of humankind. And much of it relates to global warming.

Yet people who refuse to consider the possibility that human beings could have that much influence on our climate simply throw their hands in the front of their faces when they hear such things. To them in part we owe 20 years of delayed action on global warming. That delay could wind up costing us dearly in the next 50-100 years.

Not everyone thinks like that, of course. There are plenty of people who easily reconcile their religious beliefs to science. That means they can imagine also the moral and practical benefits of something so simple as riding a bike to work in place of driving a car. Throughout the world there are cities encouraging more people to ride bikes. There are even cities like Chicago carving bike lines out of skyscraper canyons so that cycling is safer for those willing to reduce carbon emissions through personal effort.

If you take 10 million cars off the streets each day, or perhaps 100,000,000, there is going to be a difference long term in the amount of carbon dioxide released into the air. Then moderate the amount of coal we burn in power plants, replace it with wind energy or solar, and suddenly the carbon footprint of daily life is reduced.

But not if people are so stubborn in their beliefs that they cannot conceive of a world that actually operates in predictable, measurable natural laws and the human interaction with those laws that leads us to pollute and disturb even the global climate.

It’s a very strange, somewhat sad intersection in the history of our world. We live in the most technologically profound and scientifically informed age in the history of the human race. Yet there are those who simply want to deny the potential enlightenment and progress these things offer because it does not coincide with their radically primitive view of the world.

I stare at those wagon wheels in the photo above and think: Were such wheels really the beginning or the end of mankind?