A few things off the top of my head about running, riding and swimming

Posted on February 5, 2014 by Christopher Cudworth

A bald head can be a benefit, you know.

I knew at a relatively early age that I would someday be going bald. Family history assured me of that.

Armed with that information, it is not nearly so traumatic to lose your hair. In fact you never really slow down to worry about it. Not if you have the least bit of a mature mind.

Yet lacking that perfection, there are plenty of benefits to being bald beyond looking like a total mannikin man type.

For one thing, you never have bad hair days. Take off your bike helmet and there’s no flying hair looks going on. There may be a few creases in your skin, or  red lines running the length of your head from front to back. Those generally fade in minutes. Bad hair, it sticks up and sticks around till you can get to the shower and fix things.

Having no hair on the top of my head the last few decades has made me wonder if having all that hair when I was younger actually slowed me down a bit. My hair was so thick that even when it was down to my shoulders it did not want to be pulled into a ponytail or anything like that. But I had so much

The long locks of Sanya Richards-Ross trail behind her in the sprints.

at some points that I wonder if the drag while running was significant. As documented in this Slate.com article on Sanya Richards-Ross, apparently there is some degree of resistance.

I see photos of that steeplechaser Evan

Jager with his floppy hair and recall what

it felt like to run with a head of hair flying back from my head. Not sure I miss that at all.

A slick bean in the pool

Certainly now that I’m learning to swim again, there are benefits to being bald, and beautiful. (I couldn’t resist.) No swim cap necessary. Drip dry skull. Goggles go on smooth and come off easy.

Following workouts a bald head is low maintenance. With a full head of hair that used to freeze on the way from the gym to the college union after winter workouts, it was always a bit strange to reach back and feel like your hair was a creation on the order of Syndrome from The Incredibles movie. Frozen stiff.

There have been days when I wished the woman in my life could run her hands through my hair. That happened first when I was in 8th grade. The older sister of the girl I was liking at the time took a fascination with my hair and began running her fingers through it. I sat there aghast that her hot older sister was touching my hair. Would it make her jealous? Mad at me?

In fact it was the opposite. Suddenly all the women sitting on the porch were focused on my hair. I had no freaking idea what to do but just sit there, flushed and a little afraidthat this group of cheerleaders was paying attention to me. Me, the skinny kid from up the hill. With hair. That someone liked.

Women always seem to be playing with each other’s hair.

Of course guys at that age do not recognize how tactile women really are. Women tend to appreciate things like hair on its own merit. I see young women touching and playing with the hair of their friends  all the time. Makes sense. It is a wonderful sensation to have someone play with your hair. You could probably do an entire scientific study on the subject, but funding for that might be hard to get these days. The Tea Party in America thinks the deficit is hairy enough without investing in such findings.

What an athlete! Miley Cyrus got out of her underwear so quick they should make it an Olympic sport.

But what if we found out that stroking each other’s hair made us smarter as a nation. Hair stroking could result in a competitive advantage on the global scale, launching America back into thought leadership on all sorts of topics, such as why Bruce Jenner looks like he just saw a ghost and how Miley Cyrus got out of that underwear so quick in her video for Wrecking Ball.

Jessica Alba sports some really nice hair. In some countries, that’s enough to get you dragged off and beaten if you’re a woman. If you’re a man, however, hair is God’s gift to manliness. Go figure.

Oh, wait. We already lead the world in categories like that, which is why so many people love America.  We’re infinitely entertaining.

That is also why people with bombs and radically conservative worldviews want to blow us off the face of the map. In their eyes, we’re the hair on the globe that should be shaved off. In their eyes, it’s that simple.

They did hurt us big time back on 9/11. Following the terrorist attacks America seized up like a spasmatic sphincter during a marathon on a hot day. We could barely hold our **** together. It has taken us a while to get back on track.

Did you know that the American deficit is shrinking? The bald truth is that despite claims by the rather boisterous cabal of fearmongers opposed to the current POTUS, the deficit has dropped from 10 percent of GDP in 2009 to about 4 percent of GDP in 2013.

Yet Obama-haters are still yelling the President as if is hair’s on fire for refusing to cooperate with them. The truth is he fixed the country, for the most part, during a time when everything was busted up from top to bottom. To put it in athletic parlance, in 2008 America was a bike with flat tires, a busted chain, no brakes and bar tape laced with glass. Yet Obama got that bike fixed by putting money into repairs and then demanding that people ride with more common sense than running intersections and waving at the poor people alongside the road. 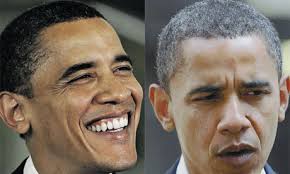 President Obama shows a little grey. Yet he keeps fit and that’s what counts.

Fighting political battles like that is enough to make you lose your hair, if you still have it, or go grey, as Obama is certainly doing. Let’s face it, Barack is at the age where hair goes grey whether you’re President or not.

That’s the strange thing about all this hair stuff. I lost most of my hair before it got grey, and now that it’s grey I mow it all off every few weeks with a set of electronic clippers. I haven’t been to the local tonsorial parlor for a decade or more. That means I’ve saved about $2400 in haircuts over the last 10 years.

Sure I have to make sure my head stays covered on really cold days. It’s not really functional to wear one of those ear warmer things either when the top of your head is exposed. But I’ve made sure to make hat-wearing something of an art. There are dozens of hats flitting around my house. I have several inventive ways to hang them, turning the hats into decorative pieces over my downstairs fireplace, for example. It’s an art form that changes with activity and the season.

Just a sampling of my hat collection.

In fact I think I’ll add my bike helmet to the rotating hat collection at some point. You’ve got to trust care of your head to hats and helmets when there’s not a layer of hair to protect your noggin.

And oh man, that can be bad. Even with a hat on it’s a bear to scrape your head on a house beam while cleaning out the attic, or to strike your scalp on the edge of a cabinet. The bleeding can be wicked. Sometimes you don’t realize it and people jump back in fear, proclaiming, “What did you do to your head?”

Gorbachev. That’s how I look after an encounter with a garage door.

I can’t blame them. The merest scuff of the scalp can produce major bleeding. Then the scar lasts a couple of weeks so that you look like Gorbachev.

I have not been so unfortunate as to crash my bike and hit my head so that it bleeds. In fact I hauled my bike to the ditch during bike wobble a couple of years back and likely saved my head from possible damage on the rough asphalt that caused the bike to vibrate from the ground up. Instead all I got was a busted collarbone, and that only required surgery. Lying on the ground that day I literally said a prayer of thanks to God that my head was okay. Brain injury is a difficult injury to overcome. A collarbone can heal, but it’s tougher to fix a brain that has been rattled. Just ask any NFL or NHL player. Our brains are not so tough as we think sometimes.

Before going grey and bald, this photo was taken by a good friend Karen Woodburn.

So that’s why I don’t argue for lack of hair. Set aside the jokes that my bare skull is the Solar Plate for a Sex Machine, or that a bald head is the sign of a mind so active it pushes the hair out of your head. All those things are true of course, but mostly I’m grateful to be who I am, bald head and all.

I can run, and ride, and swim. That’s plenty to be grateful for. And there’s no hair on my head to come between my love for those things. Those of us with no hair go naked into the world, you might say. And we love it.