On cancer, mortality, and running and riding through life

Posted on March 24, 2013 by Christopher Cudworth 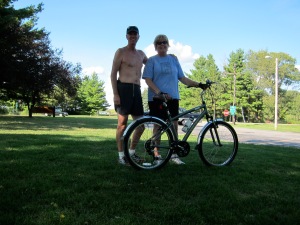 Christopher and Linda Cudworth in 2012. During a window of cancer remission for Linda. Click to enlarge.

Over the past few years my wife Linda and I have joined friends on mini-vacations in southwestern Wisconsin. Part of our reason for going is a mutual appreciation for Frank Lloyd Wright, whose work we have explored in Chicago at the Robie House and out east at Falling Water and Kentuck Knob in southwestern Pennsylvania.

While in Wisconsin we always took in a few of the familiar spots, including House On the Rock, which we all found boorish and over the top. It is said that when the so-called architect of House on the Rock asked to join the Wright school and work in the field, Frank Lloyd told him, “I wouldn’t hire you to design a chicken coop.”

And one can see why. The Taliesin home of Frank Lloyd Wright in Spring Green, Wisconsin is a study of well chosen spareness and prairie-style architecture. The House On the Rock is a penile work of frenetic energy stuck to a cliff. The two contrast each other perfectly, in a Wisconsin sort of way.

You may enjoy the House On the Rock for a variety of reasons. Some like the eclectic collections of stuff the guy accumulated. Others like the rambling architecture, if you can call it that. We felt the place to be a strained attempt at originality. And that’s being kind. And the collections? Felt just shy of hoarding. American Pickers might have ignored the lot.

This is not to be snobbish or superior to anyone. We all have our judgements of life. Some of them are accurate. Some not so much. We miss something in the construct and miss the message completely. Or we assume our way of thinking is the only way. Perhaps the House On the Rock really is a work of genius. If so, it was lost on us. So be it. We tried.

While in Wisconsin we also rode our bikes a bit. But the hills there are not easy for the taking, and Linda found it difficult given her basic lack of riding base. Still, we went up and down those unglaciated mounds of limestone and made the best of the bike rides we did.

The first trip was summer of 2009. My wife Linda struggled a bit on the bike that year. We found out that September her cancer had returned. So she’d been riding through the early fog of yet another physical challenge, one that started in 2005 and continues to this day, although the struggle will soon be coming to an end.

Always she has been persistent, hopeful and strong as she could. Yes, there have been fearful times. Places where she faltered against tough circumstances. But overall, her will to live has been something to see. In cycling terms, she is the ultimate Hard Man. A rider in the rain. She has not quit in the wrestling match with the gorilla. And the gorilla has never tired. Cancer kept coming back. That is the tarsnake of cancer.

It may have been fate of a sort that led me to ride my mountain bike off on a different venture that year. I wanted to roll around Governor Dodge State Park, a place that had been formative in my early adulthood. One summer before college there was an RA Retreat from Luther College held there, and I put in 80 miles running in those deep, rich hills in August of 1978. That year I moved up to second man on the cross country team and we placed second at nationals.

But the nature of the park was also what I remembered. It encompasses deep valleys of dark green woods, and jutting ledges of shelf limestone. Fields of bergamot (bee balm) and wild eyed sunflowers burst forth in summer. Birds are everywhere, and singing insects.

As I rode through the park on my own that day something made me stop on one familiar slope heading back toward the park center. The crickets were chirping. An indigo bunting repeated its mid-day song, persistent through the heat and sunshine. And it occurred to me: “This will keep going long after I’m gone. These birds and crickets and shining leaves were here 30 years ago. And they will be here 30 years in the future. And 30 years after that. And I will be gone.”

Realization of our own mortality comes in bird song, and crickets chirping. At that point we don’t need religion to tell us what’s going on. In fact my worldview is a pretty even balance of the organic and the spiritual. I’m built that way. Some people depend more on the organic than the spiritual to make sense of the world. That makes perfect sense to me too. No judgement is important but your own. The bible may tell you differently, and the confessional language of faith as well. But I think it’s a balance. Yin

Life is balance. Difficulty and joy.

and yang. Melody and harmony. Realistic and abstract. Some just see the side of the equation that makes sense for them. I believe they’re blessed as well. Maybe that’s my Unitarian side. My mother was a Unitarian. She  died of pancreatic cancer in 2005, the same year my wife started treatment for ovarian cancer. 2005 was an interesting year, to say the least.

I do believe in a God who understands both and all perspectives. When I sat on my bike listening to those crickets in the hills of Wisconsin, I also thought about Linda, and whether the cancer would stay away. Not even knowing at that instant it was already back.

Yesterday she stood up shakily from bed and in both a practical and loving move, placed her arms around me for a few moments. She wanted help walking but this was also a time for being close. That’s been hard to find over the last few weeks. We are alternately so close neither of us can see around the other for the things that need to be done, and separated by a distance of discomfort and the chirping of a hospital bed in the living room, like crickets in the hills of Wisconsin. We listen and try to understand. That chirping you hear is both a pragmatic truth and a symbol of our being. It is both organic and eternal. That is where we are.

When we stop to listen, the hills and everything we admire and treasure sometimes talks back to us. Of course we must wade through the strange and acquisitive at times to find what it is true and important. Perhaps it is our ultimate plight: we must go through the House On the Rock to appreciate our Taliesin. That is life, in all its perfect strangeness. We suffer our own judgements, and wonder why it is all so damned true.