Seeing your way to better running and riding

Posted on March 6, 2013 by Christopher Cudworth 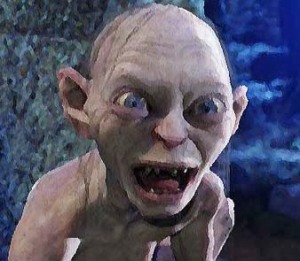 Floaters in your eyes can make you crazy. Just ask Gollum.

Right after graduating from college, I went to an optometrist in the little town of Decorah, Iowa where Luther College is located. The appointment was going well until the optometrist dilated my eyes and took a look inside. Then he sat back and said to his assistant, “Uh oh….”

“Yes you can say,” I told the optometrist. “I’m not leaving this chair until you do.”

He glanced at his assistant and said, “Well, we can’t be sure, but it appears you might have a small retinal detachment. In the lower part of your eye. But I can’t be sure.”

“What’s that?” I asked. “What’s a retinal detachment?”

He explained how the retina can be put under strain in a number of ways. How the eye can lengthen or warp due to the pull on muscles from astigmatism or other eye conditions. Which I had. My eyes were getting worse than they’d been, and that might have pulled loose a small patch of tissue on the lower part of the eye.

“Well, I’m going to send you to the Gunderson Clinic in LaCrosse,” he said. “They’ll need to take a better look than I can get. I’m only an optometrist. You need an opthamalogist.”

Great, I thought. I’m going up in both vowels and consonants. Never good. Not when medicine’s involved. Next thing you know you’re into otolaryngology. People are sticking things up your nose, and if that doesn’t work, the proctologist comes at you the other way, up your behind. If they somehow meet somewhere in the middle, you know you’ve got real problems. Because you’re a sea anemone.

I was pissed about my eye, however, because I thought I’d put all the weird stuff of injured youth and bad glasses behind me. My senior year in college my parents finally let me get contact lenses instead of wearing the Coke bottle Napolean Dynamite glasses I’d worn my whole junior year. What a travesty that whole year turned out to be. The bad beard. The ugly glasses. The girlfriend who got jealous of my running and tried to kill me with Rum and Cokes one night in a LaCrosse hotel. She almost got me too.

But my senior year with contacts went great. I moved from 7th man on the cross country team to 2nd man for most of the year, and we placed 2nd in the nation. The contact lenses let me run without pushing up my damn glasses all the time, and the confidence they gave me socially convinced me to cut my beard and long hair, and that got me a girlfriend that I really liked. I could see my way to a brighter future.

Then the optometrist told me I might lose sight in one eye.

When my eye was dilated for retinal surgery I told some girls at the bar that night I was half drunk. They half believed me.

The surgery was dramatic, to say the least. They hooked me up to a huge machine the size of a Volkswagon. They put a big wet suction cup on my eye with goo and told me to hold still. I hyperventilated and fainted flat on the floor. Waking up from the impact, I grabbed the nurse around the waist and told her, “I love you!”

She hoisted me up, stuck me back on the machine and said sternly, “Stop it. Now breathe normal.”

And they proceeded to shoot bright green light into my eyeball, cauterizing the retinal detachment. It has lasted for decades. No more problems.

Until the floaters showed up a couple months ago.

It started with just one floater, in my left eye. That didn’t bother me too much, but I went to the opthamologist nevertheless. That’s right, skipped right over the optometrist this time. The Big O told me all about floaters, and asked if I’d seen any bright flashes. Told him I had. “Hmmm, not good,” he said, rubbing his face with his hand. “But it might not mean anything either. We’ll dilate you and take a look.”

There was no new detachment. But he told me I’d have to live with the floaters. “You’ll get used to them,” he assured me. “Sooner or later you see right through them.”

Everyone has floaters. They vary in size. But sometimes bigger floaters break loose and dangle around inside the liquid in your eye like a cheap chandelier with no lights on it. They can get really annoying, particularly when you’re staring at the crystal clear screen of a retinal display Macintosh, as I do all day. And how ironic. A retinal display for a guy at who once had a retinal detachment.

Whatever. Soon, as predicted, the other eye developed a floater too. Now they bounce around before me like a macabre half-invisible amoeboid dance team. Nothing you can do about them.

While riding they sometimes interfere with my view of the road up ahead. Running too. But at least I have my vision. Haven’t lost that. And I’m used to compensating for this or that ailment. Isn’t everyone? It’s just that bothersome floaters also interfere with looking at people while you’re talking to them. And when I birdwatch I keep thinking I see a Cooper’s Hawk out of the corner of my eye when in fact it is only a floater. Bugs me.

I’ve had an optical migraine before where your vision completely blacks out in one eye. That’s weird. To me it appears to be dietary. Absence of chocolate perhaps. But one can’t be sure.

Vision is pretty vital to running and riding. Although people do without. They amaze me. Like Marla Runyan. People like that really do amaze with their ability to overcome difficult physical attributes. Makes a couple floaters seem like no big deal.

And they aren’t really. Seeing your way to better running and riding takes a little extra work sometimes. At least I don’t have to wipe off my Napolean Dynamite lenses anymore. Usually.