Posted on July 9, 2018 by Christopher Cudworth

The wonderfully weird thing about endurance sports, especially triathlon, is there’s really no such thing as age and gender when you’re out there on the course. As a sixty-year old dude I realize my fastest days as an endurance athlete are long over. But it doesn’t mean there’s not an opportunity to compete at whatever level one wants to choose.

Two weeks ago at Pleasant Prairie I was one second off the age group podium. One second. LOL! So I was seeking a Podium placement this Sunday.

So this week I made a little better scene out of transition but still averaged almost two minutes getting in and out of there. That can still improve. But really, the more painful loss of time most was my flailing effort at the first open water swim without a wetsuit.

Having spent more time in the pool and gotten real results of late, I was confident of the ability to swim all 700 meters or whatever it was. But it’s not like you’re running on a track out there. I swam off course to the right this week after swerving to the left several times two weeks ago.

Perhaps I need a map like the one created by some sweet little kids on a cheer poster for their daddy.

It took me far longer to finish the swim than it should have. I have this thing where I fatigue early no matter how slow I start.  I begin at a crawl, but still my arms funk out and I’m forced to pause and catch my breath. During workouts, I don’t swim efficiently until I’m really warmed up. Then I’m fine. Whether it’s age issue or leftover rookie swim tension, a body quirk or plain old warmup woes, it’s a mystery I’ll have to solve. Some of that is surely race tension. I’m still fairly new at some of this, especially swimming sans wetsuit.

Once I got going again it went okay, but I’m giving away minutes in the water that I can’t quite make up on the bike on the run. I was nine seconds away from second in my age group this time around. My swimming is improving so I’m confident I’ll get there.

Is there anything better than the Run Out at a triathlon? Typically you go stomping up some sandy beach and the morning air is so cool and fresh. People cheer you on and the world feels so fresh and new.

And talk about new sensations! This time I didn’t even have to peel a wetsuit! That lack of hassle is worth getting better at swimming for summer events. For those of us that have come back to swimming late in life, these are revelatory moments. 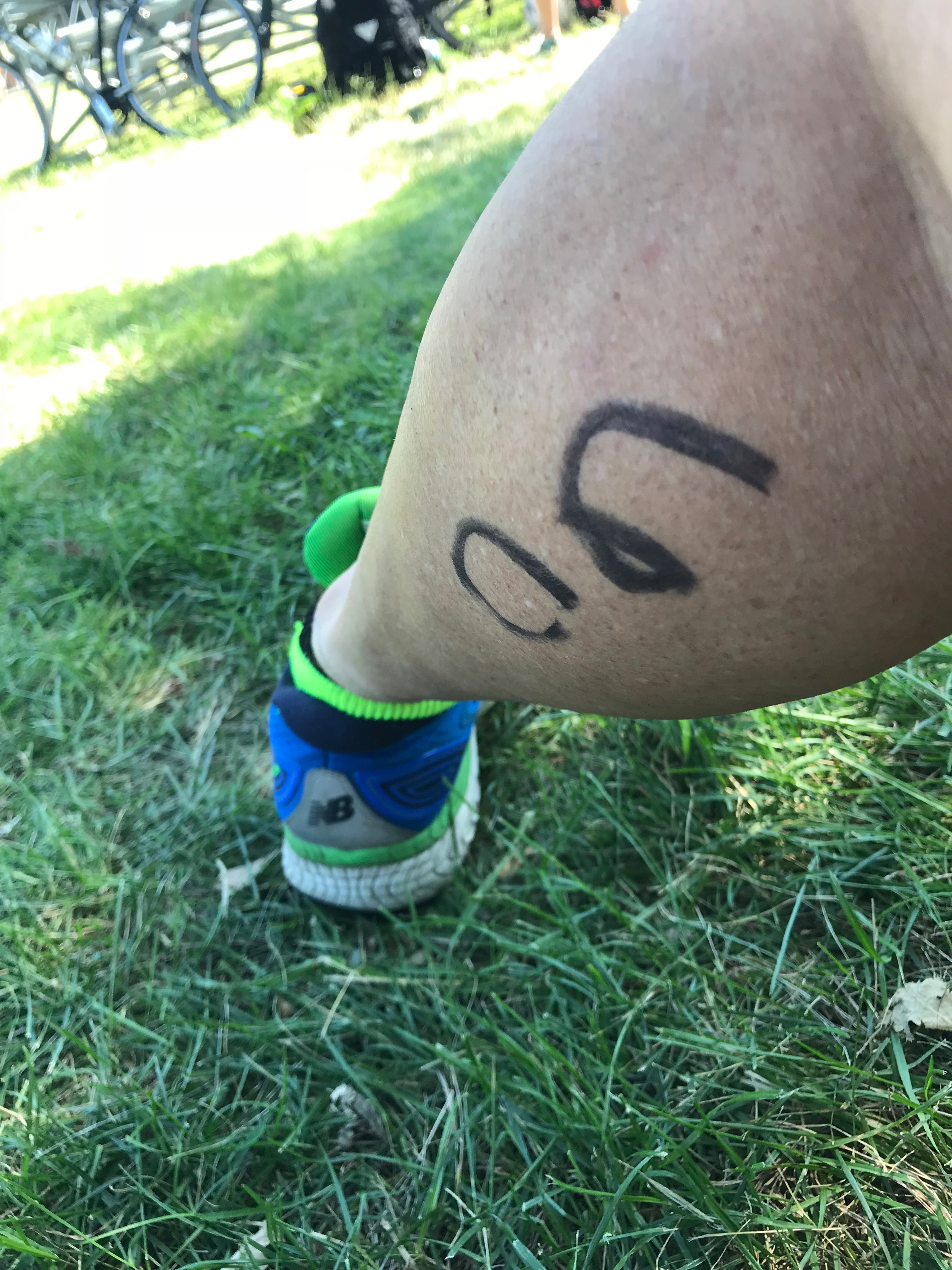 It’s also cool when you plop your wet butt on a bike seat and ride into the early morning air on your bike, thinking: “Damn this stuff is fun!”

I averaged just over 20 mph for the bike course but the results showed everyone going two or three miles per hour faster than they really did. For example: I was listed at 23.5 mph average. That would be nice, but that did not actually happen. Not with some of the hills we climbed. I geared down to climb and spun like mad, but I was not going up those hills at 20 mph. No way.

But racing your bike is fun even if it is sometimes painful at the top of a long incline when your hamstrings feel like large rodents are chewing on your lower glutes. It’s getting off the bike with hammies tight from riding that makes it so tough to run.

But at least I didn’t earn a 2:00 a penalty for drafting like the dude who placed behind me in fourth. He must have been trying to sneak some time against the wind. Bummer.

My legs still felt decent coming off the bike. I managed a 7:22 first mile and averaged 7:40 overall for the three miles. So I slowed, but again there are real signs of progress there. Two weeks ago I ran an 8:00 average. So I am confident that with some actual speed training this summer, I can run 7:10-7:20 per mile in an August Sprint.

Then I may go the Olympic distance, but only with a wetsuit on this year. I’ve still got a ways to go in the swimming category before spending a half hour+ in open water in just my skivvies.

Up on the Podium

At any rate, I finished third in my age group by only nine seconds this time around. The winner was five minutes or more ahead, and three years older, so there’s no reason I can’t improve too in the coming years.

In the meantime, I’m accepting kisses from sweet dogs as consolation for my weakass swim efforts and slow transitions. I’ll be blunt about this: While I plan to improve I’ll not obsess about it. All told I still do this for fun, and my wife and I share some great times going to races and training together. It’s a bond formed of sweat and love. But I’ve yet to convince her to lick my face like this labradoodle did after my race on Sunday.

I plan on being Podium Boy a while longer, so there will be other chances. And maybe I’ll just lick my wife’s face because she was Podium Girl on Sunday too! See how happy she looks? We even got matching cups for our age group placements.  She was second best in her age group in both the swim and the bike. Her 10K run in the heat went pretty well too. Hence she was a Podium Girl! Way to go honey! Love you! 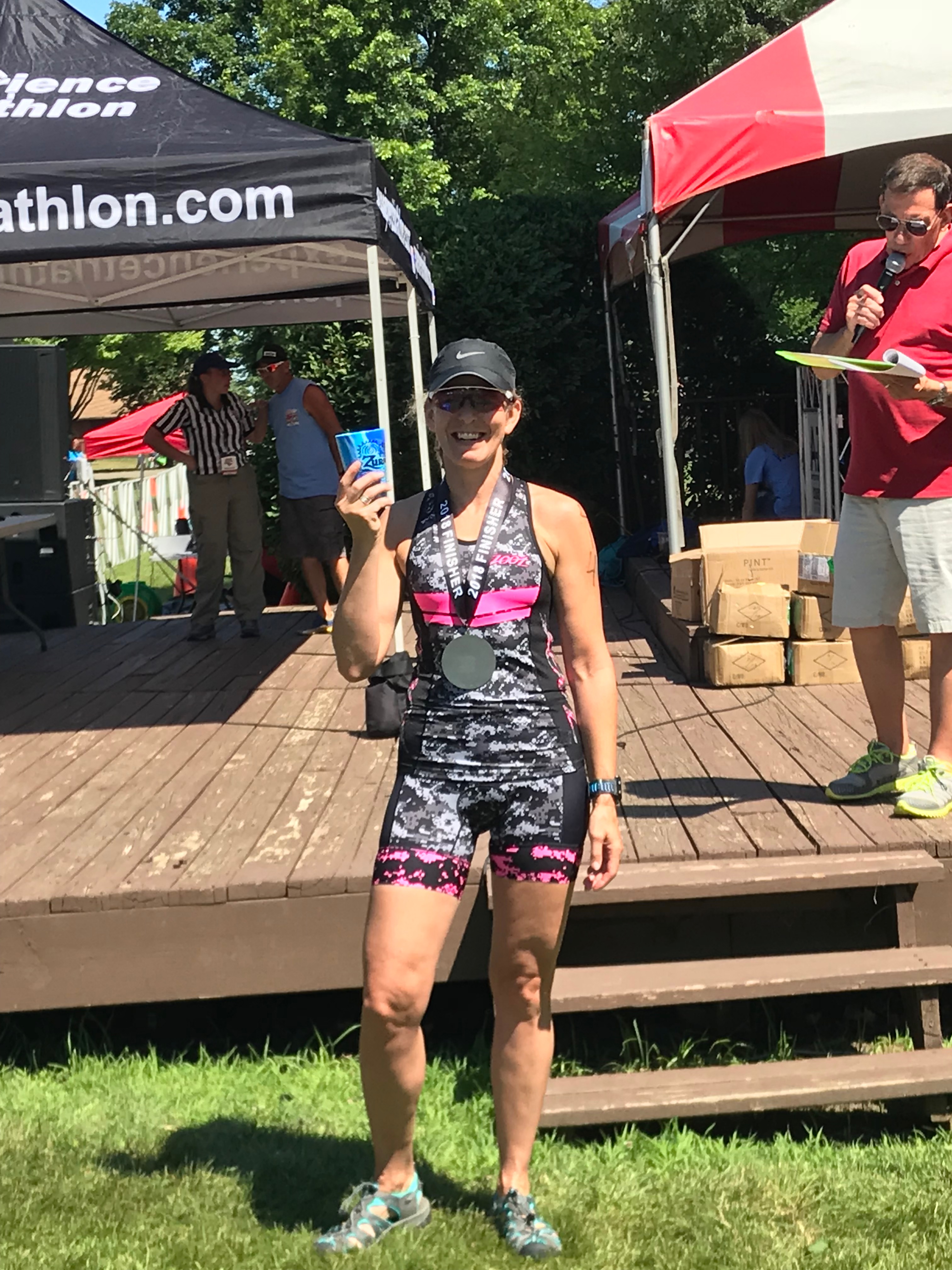 Christopher Cudworth is a content producer, writer and blogger with more than 25 years’ experience in B2B and B2C marketing, journalism, public relations and social media. Connect with Christopher on Twitter: @genesisfix07 and blogs at werunandride.com, therightkindofpride.com and genesisfix.wordpress.com Online portfolio: http://www.behance.net/christophercudworth
View all posts by Christopher Cudworth →
This entry was posted in swimming, tri-bikes, triathlete, triathlon, triathlons and tagged podium finish, swim warm up, swimming, training, triathlon. Bookmark the permalink.