Moonlighting as a cyclist

Posted on May 2, 2018 by Christopher Cudworth 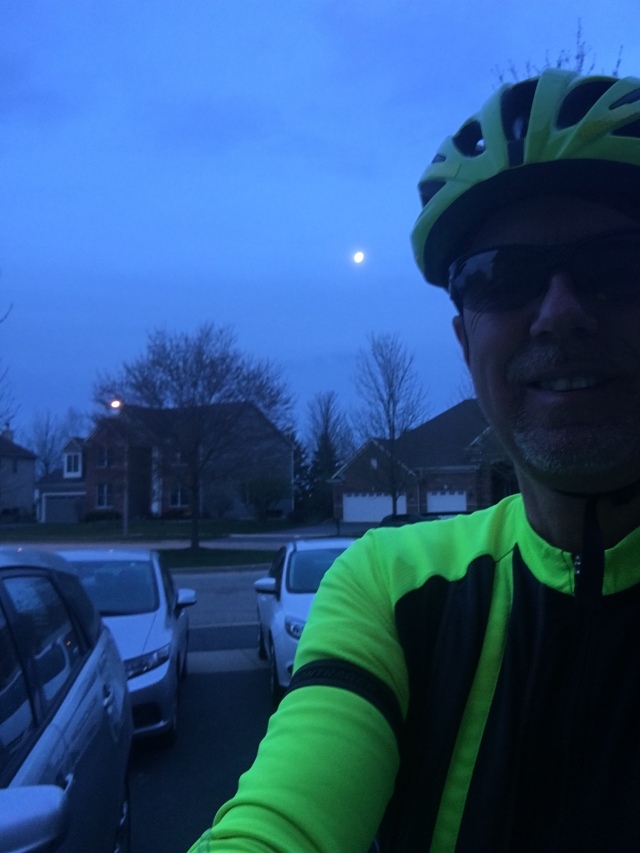 This morning’s ride started at 5:45 a.m. The sun was up far enough to provide some light. A bright moon was still perched in the southwestern sky.

We tend to think of the moon as truly “here” only when it is full. Of course that’s an illusion of our limited perspective. The moon is always “there” but sometimes it lurks in shadow 200,000+ miles away.

That realization gives new perspective on the term “moonlighting.” The traditional definition of moonlighting is to work at another occupation other than your main profession. Sometimes we do it for additional income. Other times we hope that some gig we like might turn into a full time job. The best scenario of all happens when moonlighting turns into a profession we love so much it doesn’t even feel like work.

I sort of do both with my writing and art. There is money to be made, but also satisfaction to be gained from doing things I’ve loved to do all my life. This blog does not pay me a thing, for example. But it has gotten me other work on occasion. That’s what you might call an avocation.

But I have to wonder what it must be like to have the talent of a professional bike rider and be strapped to that commercial machine for hours on end, and day-after-day. The seeming glamour of it is surely counteracted by the raw work, pain and risk of the profession. Add in the pressures of doping and team contracts and there is no way that anyone could moonlight as a pro bike rider. It’s an all-or-nothing proposition.

Moonlighting as a runner

I once blended my running with my work life, if you could call it that. As a team member on the Running Unlimited club I wound up working quite a few hours at the shop. As part of the team contract they paid for my races and my shoes. My “job” also included talks and seminars, inspirational meetings and some coaching. I even managed a sports complex for a while for rent money.

After a couple years the couple that ran the shop had to move east because the main breadwinner had accepted a transfer. They tried to sell me the shop, but I showed the numbers to some financial guys and they said it was overvalued.

The shop was sold instead to someone who moved the location a few towns over and made a go of it for many years. Thus my moonlighting days as a runner taught me one important lesson. There is no sure thing in this world unless you are determined to make it happen.

It all comes down to focus. I see people posting Instagram pictures of themselves on bikes or running or half-clothed or hawking some goods day after day. I admire their dedication. They are one-trick ponies with a personal brand to promote.

By contrast, my Instagram feed is all over the place. One minute I’ll post a photo of myself getting ready to ride and another minute I’ll snap a pic of a piece of discarded toast on the street that looks like a pair of tits was burned into it. I can’t help it. I find shit like that funny.

If shit like that makes my feed too random for public taste, I get it. People generally like their social feed friendly, predictable and inspirational.

Thus photos of women sharing their hot bodies on Instagram tend to be pretty popular. I can’t really compete with that. Even a decently shaped 60-year-old ass with biker tan lines is no fodder for the Kardashian world.

I suppose I could stake the claim, as I have hashtagged on occasion, of being the #humanhighlighter. I often wear bright or reflective gear. Perhaps that would win me a sponsorship from Proviz360 or some other activewear supplier. But then I couldn’t post images of tits on toast. Where’s the fun in that?

Perhaps it’s my ADHD that keeps me from abiding that kind of focus. Or maybe I don’t really get how half the world works. All my life I’ve bumped into situations where I think I king of think I know what’s going on only to find out later that I had no fucking idea what was really taking place.  Life can be tough to figure out and moonlighting at shit even within your realm of expertise does not necessarily make it any easier.

One thing I do know is that I could never have truly been a professional runner or a professional cyclist. While I was massively focused for a time on becoming the best runner I could be, there was this thing called raw talent that I did not possess. I knew deep down from the early days of high school competition that I was not truly part of the running elite. It doesn’t take a genius to figure that out. Either you’re faster than other people or you’re not. I did do the best with what I had. Won quite a few races and broke all my PRs after college. Then I mellowed out for a lifetime of fitness training. That was a good decision.

Ever since I started cycling fifteen years ago, I’ve seen improvement in efficiency oon the bike, but have not necessarily gotten faster over the years. I’ve never ridden a one-hour 40K, for example, like my brother-in-law once did. And I never will.

Part of that is the inevitable effects of age. I am still beating my former times on the occasional Strava segment these days. So one can moonlight at this cycling thing and see improvements despite the depressing progression of crepey skin and less than responsive muscles that are signs of age.

Cycling is both the most forgiving and demanding of sports. It beckons you to do more and punishes you at the same time. One might even call cycling an abusive relationship of sorts. Half the world seems to be engaged in one. Might as well lose weight while you’re at it.

It’s a commitment that requires some personal branding. I’ll still shave my legs this summer despite the fact that I only competed in one criterium race all last year. Perhaps that will change. I’m up an age group now. So it might be fun to try to win a crit or two. There are still tough 60+ riders. No guarantees of success. Whatever the racing choices on the docket, I’ll still shave because that’s what cyclists do. It feels better to be sleek when doing triathlons than barking around like some hairy tri-dog. I can’t help it. That much has been ingrained in me.

It’s all in how you look at things. We’re all mostly moonlighting at this fitness thing. But that’s the point. Like those times when the full moon isn’t visible, it helps to know it’s still there. Even that sliver of a crescent moon says something. It’s there even when we can’t see it. We take it on faith that the pursuits we choose are worth it even when we can’t see immediate results. They contribute to our well-being in ways that we can’t always see, even in the moonlight.