Learning to smile on the hills

Posted on February 13, 2017 by Christopher Cudworth

Yesterday we ran 10 miles in the Morton Arboretum, a hilly landscape in suburban Chicago. There aren’t than many places in northeastern Illinois where you get a set of hills so close together. The Arb cover a series of glacial kames in DuPage County. That means it is an attractive place to train for dozens of runners who descend on the place every Saturday and Sunday morning.

Our planned 10-miler took a tour of the east loop first. The road climbs gradually through a pine woods and winds toward the far east side. That’s where a semi-native forest of maple trees covers terrain that drains to the wetlands below. On summer days the humidity in these woods can prevent the pavement from drying. That means dangerous footing where moss lurks on the road edges. Cyclists must be careful in sections where the asphalt stays slick with morning dew.

For runners, the same holds true in winter months when melting snow can create wide patches of black ice. Fortunately for us, the roads were dry due to a prolonged warm spell that wiped out the snow several weeks ago. The temps were in the low 30s when we started out. That meant there were few other obstacles to address. It was just us, the hills, and ten miles to cover.

Sue has been working on hills over the winter months. Her coach has her doing treadmill work on inclines, and we’ve gone to several sweet hills to do repeats. So her technique in hill running has improved.

It’s a fine line for many people to figure out the optimal hill running form.

You can’t just run up a hill using the same running form you use on the flats and expect the same efficiency and results. The simple physics of hill running demand a change in strategy and technique. Runners who employ a fairly erect body position while running on the flat would actually find themselves leaning somewhat backwards if they tried to maintain the same relative position to the ground.

That means leaning into the hill is important. But you also don’t want to get your head so far forward that you’re actually falling uphill. That’s not efficient either. So the extremes are something to avoid.

The ideal running position will vary depending on the degree of uphill you are climbing. Some of this takes practice to make perfect. Sue’s coach has been having her do hill repeats and it took several sessions for her to get a feel in combining her midfoot strike with proper arm carriage.

It seems so simple, and yet there are plenty of people who make the mistake of carrying their arms a bit too high. You actually lose the companion drive necessary to run hills well when carrying the arms too high. But you also don’t want to straighten the arms completely when running hills. By definition that forces you to lengthen your stride in sync with the arms. That’s not the most efficient way to climb either long or short hills.

The ideal “structure” to arm carriage is having the forearms at about ninety degrees from the upper arm. This provides optimal swing capability and prevents you from “shrugging” your way up the hill by tucking your arms against your chest like a T Rex.

It is the ability to run off the midfoot that will produce the most drive in any type of running style. That is what you need to practice on hills before doing long, hilly runs in hopes of developing better efficiency.

Learning to drive uphill using a forefoot stride is far better than trying to “heel” your way up the same hill. Think about it: landing on your heels while going uphill actually requires you to lift your leg higher off the ground in order to place your heel in the next stride. That’s a bit of repeatedly wasted motion that gains you zero forward impetus. You’re actually putting the brakes on the entire way up the hill.

Paw your way up

The better way to hill run is to the “paw” your way up the hill using a “sweeping” motion with your forefoot as the principle point of contact. You’ll still have sufficient opportunity to push off with the foot. The degree of hill you are climbing simply demands that. But the propulsion of “toeing off” in combination with a ninety-degree arm swing is what produces the most drive up a hill.

This can all seem impossible when you’re in the middle of a steep hill in the middle of a long run such as ten miles. But that’s when you shorten your stride a bit and increase the cadence. It sounds counterintuitive, but you have to “let the running happen” in those moments. Sure, fatigue may be sinking into your thighs, but keeping that slight forward lean and driving with the arms and toe push off will get you up and over far better than sitting back on your heels and laboring along.

Running hills in training can do plenty to build confidence in this respect. Run 100-meter intervals as a starting point. Focus on the feel of proper arm swing and consistent forward progress. Then increase your interval to 200 meters or about 1:30-2:00 sessions going uphill.

When you’ve built some confidence you’ll also have built some strength in hill running. This you can begin to employ in longer sessions where you run up a 400-meter hill if you can find one, and jog back down for recovery. Work your way up to ten of these intervals.

Then when you head out for a ten-mile run with hills, you will no longer face each one with such trepidation or concern that you can finish the job. 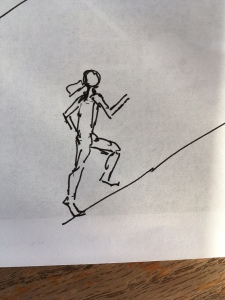 In situations where truly steep, short hills stand in your path, the entire process gets compressed even further. Increase the forward lean, get serious with the toe push off and concentrate on an even, measured running stride. It’s common to start off too hard by charging into the hill. Better to use your forward progress as a relative measure of speed. Power your way up the hill rather than sprint it. Most of all, understand that you’re calling on some energy reserves in the process. These tend to be your sprinting muscles, which exhaust themselves more quickly. You may find that burning sensation uncomfortable, but it does not mean you are finished for the day. Often the other muscles take over when you’re up the hill and moving on the flats. Trust your body. It can carry you through.

I well recall a hill at the three-mile mark of a six-mile loop in a half-marathon in La Crosse, Wisconsin. The hill went up the side of a bluff and was nearly a half mile long. We ran and ran up that hill and toward the top, my butt literally started to lock up. That meant I’d fully engaged the driving muscles on the hill. A part of me worried that I’d burnt all the matches in the box. Yet after the crest came a long downhill and within 100 meters I was flying down the other side. I finished the race just over 1:11 that day. Not a bad effort on a tough course.

But the worst road race for hills was a 10-miler near Lancaster, Pennsylvania. There was hardly a flat mile in the entire race. I went out with the leaders that day, who seemed to ignore the hills and took us through the first two miles in just over 5:00-mile pace. I hung with them through five when the ultimate leader pulled away. A pack of us fought up hills and down, at times flying on the downhills faster than 5:00 pace, then climbing another steep hill at over 6:00 pace. A topographic map of that race would have looked like the fibrillation of a dying heart patient. And at times, it felt that way inside my own body.

I still finished in 54:00, possibly one of the best running efforts I’d ever accomplished. There have been other hilly races including a four-miler in Glen Ellyn, Illinois where my time of 20:00 flat was exceptional given the massively hilly terrain on which the race was held.

These are small proofs that it pays to take pride in your hill running, and work at it. There is no sense trying to fake it or avoid the fact that there are hills in this world. The pride and confidence you gain in climbing tough hills during training has direct applications in racing.

The same holds true for cyclists. Training on hills is a crucial source of strength-building. The techniques for successful climbing include consistent pedal strokes using both quads and hamstrings, and utilising core strength to support these two muscle groups. Clipped into a bike, it is yours to funnel strength all the way down to the pedals. It is a very different transfer of power from running. You almost want to pull your way up most hills rather than push exclusively with the thighs.

Yet there is beneficial transfer of strength from hill training in running and cycling. The psychology is much the same as well. There is no place to hide, but then again, that’s the point. It’s the hidden strength you build by practing on hills that exposes your true abilities. So go for it. Seek out those hills and do the work that builds strength and confidence. Then you’ll learn to smile as you head on up. “I can do this! I can run (or ride) this hill!”

And that’s where you want to be.

Christopher Cudworth is a content producer, writer and blogger with more than 25 years’ experience in B2B and B2C marketing, journalism, public relations and social media. Connect with Christopher on Twitter: @genesisfix07 and blogs at werunandride.com, therightkindofpride.com and genesisfix.wordpress.com Online portfolio: http://www.behance.net/christophercudworth
View all posts by Christopher Cudworth →
This entry was posted in running, Uncategorized and tagged learning to smile on the hills, running, running form. Bookmark the permalink.