The curse of the snack attack

Posted on February 10, 2017 by Christopher Cudworth

A dietitian friend and multisport associate on Linkedin posted a description of how to manage snacking. I read the recommendation and something in my brain did not quite process it the way it should be. So I joked with her, because I’ve consulted with her previously about nutrition for athletes.

I was playing the part of the athletic fool, of course. But like most athletes, I’ll dig up any kind of excuse for a snack. Just writing the word snack makes me feel snackier.

So you have to set up some rules for yourself. Or else snacks will take over your life.

The key thing with snacking (as any fool can tell you…) is to cut down sugar and carbs. These are the foods that make us fat. They make me fat anyway.

But cutting them out can be tough because sugar is everywhere. It’s hiding in everything. Sometimes it’s even hiding in plain sight. That’s the case with the muffins and other goodies at Starbucks. They just plop those fat and sugar bombs right in the line of sight while you’re standing in line.

It’s so hard to resist. A good muffin is like a hot mess of carbohydratey goodness. “Eat me!” it hisses through the glass. “C’mon, eat meeeeee…”

It’s like that at just about every other coffee shop in this universe. And we’re at our weakest point when we’re starving from having just completed a run, ride or swim early in the morning.

Last weekend after an eight-mile run we happened to be parked by a popular Sunday morning breakfast place called Harner’s. It’s a classic local restaurant in all the good, right ways. The place is jammed with breakfast eaters and brunchers. But the real temptation zone is the donut and pastry case. It’s a glass structure thirty feet long and it is jammed with shiny rows of disgustingly good treats.

I ordered a yogurt parfait and a chocolate milk. Those sound like good choices, right? Well, half the yogurts we eat are chock full of sugar. And so is chocolate milk. My After, My Ass. 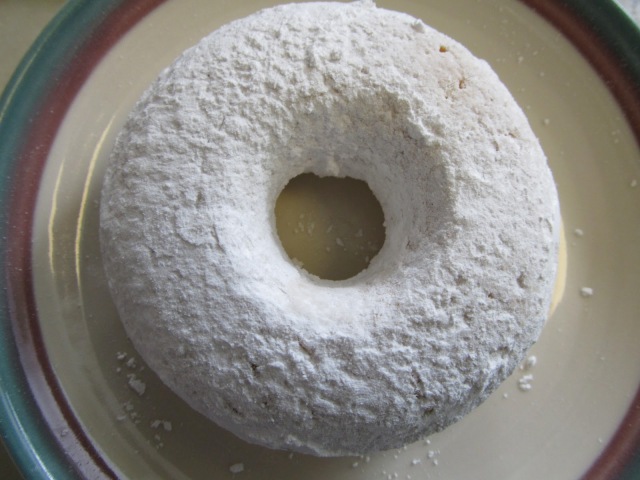 Anyway, I walked over to pay for my good choices when I looked down to see the clean round shape of a powdered sugar donut. “I’ll have one of those too,” I told the young lady.

Now in a just and righteous world, that young lady would have looked me in the eye and said, “Sir, do you really need that donut?”

But instead, she asked, “Will that be all.”

Then I sat in the car and ate my parfait. It had fruit in it, but the fruit felt fake because it was a little rubbery from swimming around in that parfait. But I downed the lot and took a good swig of the chocolate milk.

Next came the donut, which I broke into bits because eating a powdered sugar donut by holding the whole thing up to your face is flirting with disaster. All it takes is one sniff of that fine powder and a sneeze will erupt that can kill a bird in mid-air. So I took little nibbles of that donut while licking my fingers after each bite. I look like a cocaine abuser anyway, because my nose and already silver goatee was rife with powdered sugar.

I was just about finished with my evil treat when Sue came trotting back from the extra two miles she logged beyond the eight that I had run. I hid the rest of the donut in the brown bag. It made me feel like a druggie hiding a stash of pot from the cops. She’s pretty damn disciplined about what she eats except when she’s not. Which isn’t all that frequently but it still happens. Sometimes she gets hungry for anything that is edible within fifteen feet of her. Because we’re athletes.

So I wasn’t kidding when I asked my friend Laurie if I could have two snacks instead of just one. Because I always share the extras with my sweetheart. Except when I don’t. Because a powdered sugar donut is just not meant to be shared if it’s going to ruin someone else’s discipline and diet.

2 Responses to The curse of the snack attack