Jamie Block Mayer a dynamo you should know

Posted on February 14, 2017 by Christopher Cudworth

Jamie Block Mayer is not much more than five feet tall. Her legs are thus in perpetual motion as she speeds along at just over 6:00 pace in a 5k. Those legs keep her going for much longer than that as well. Last fall she won the women’s division of the Fox Valley Marathon in St. Charles, Illinois in a time of 3:19.

“I was running along and after about ten miles people started shouting that I was third woman,” she recalls. “And they said I wasn’t far behind second. So I decided I’d try to catch her. Then I was going through fifteen or so and people kept telling me I wasn’t far behind the first girl. So I thought, ‘I’ll try to catch her too.’ But then I was in first, and it wasn’t as fun trying to hold the lead as it was to catch people.”

Yet she did hold the lead, and the joy on her face coming across the finish line expresses the relief and thrill of accomplishing a win in a marathon with more than 1000 competitors. “I try not to make things too complicated,” she says of her training leading up to the race. “It’s pretty much 40 miles a week with a tempo run and some intervals every week. A friend named Mike Behr told me how to train a few years back and I’ve tried to follow the same program. Maybe I’ll go online and find something that sort of matches. Then I just do it.”

Some tease her about the regimen she uses in training. Her Strava feed shows a series of out and back or loop courses leading from her home. They don’t vary much. “I have my 5K, 10K, 10-mile and 12-mile runs,” she relates. “Even when I run with other people like Mike, he’ll say, ‘Let’s turn here’ and I’ll go, ‘No, that’s not on my loop.” 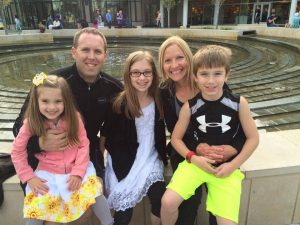 Her schedule and obligations demand that kind of focus. She is a professor at Northern Illinois University in DeKalb, Illinois. She has her Ph.D. in Communications Disorders and Neuroscience and instructs her students in Speech Pathology. Her husband Steve, an orthopedic physician with Northwestern Medicine, threw her a nice little party when she received tenure a few years back.

And while Steve is also an endurance athlete and an Ironman triathlete, the two seldom (if ever) train together. Their paces and priorities typically don’t match up given her penchant for speed and his focus on longer races.

“I won a 5K a few years ago,” Jamie notes. “I was just over 6:00 pace. And I’m pretty competitive in every race I enter. A couple years back at the Sycamore Pumpkinfest 10K I was standing next to this 20-something girl at the starting line and she was going on about how she was up late partying and didn’t feel that great. But then she beat me. And I was pissed,” she laughs.

Thus it isn’t age that defines Jamie Block Mayer, but the purity of effort and the joy of participation. She encourages the same love of sports in her children Tara, age 12, Max, age 9 and Ellie, age 6. The eldest is involved in gymnastics. The middle child has earned national championships in the sports of tumbling and trampoline. Her youngest seems headed for considerable achievements in gymnastics as well.

That schedule of getting kids to practices is shared by the couple, and that’s another reason why Jamie and Steve don’t often train together. “We have to get the kids where they need to go,” she observes.

With a running career that began in her early 20s, Jamie has achieved some notable accomplishments herself, qualifying for Boston a few years back. She ran the race in 2013 when the bombings hit near the finish line. “I heard a noise but I was down by the buses getting my gear,” she recalls. “Then Steve called me and said “Run!” and I answered, “I just got done running! Then he said, ‘Something really bad just happened. Get somewhere safe.”

Thus her experience in one of the world’s most famous marathons was colored by terror and tragedy. Thankfully such events have been rare in the world of road racing.

Perhaps that contrast was more in evidence as she raced the bike trails in the Fox Valley Marathon last fall. The race follows the Fox River south to Aurora and back to St. Charles. Typically the weather has been fair and clear for the race, with leaves starting to change and the river surface reflecting the glory of the valley. The predominant noise is often the honking of geese and the cheers of happy fans staged along the course.

It’s almost hard to imagine those short Jamie Mayer legs carrying her the entire marathon distance. But anyone that has seen her run dispenses with those concerns immediately. And as she rounded the final corner into the finish of the Fox Valley Marathon with that huge smile on her face, the crowd cheered her every step. Jamie Block Mayer was very much in her element because while she may be small in stature, she believes in doing big things.