Is anybody out there a runner or cyclist?

Posted on April 15, 2015 by Christopher Cudworth

When I began this blog a couple years ago it was titled We Run and Ride because it would have been kind of dumb to call it I Run and Ride. Really? That’s just me. There’s a lot more out there in this world to write about. As well as me. Ha.

In the process of doing this blog I’ve met and profiled many interesting people including Jim Varga, producer of the white ovals now being used to market marathons and other races across the country. Also Kerri Hoskins Branson the former Playboy model turned Sonya Blade character turned superhero mother of four and now full time artist.

It was also my pleasure to get to know one of the world’s all-time leading distance runners Craig Virgin, two-time world cross country champion and perhaps one of America’s least-appreciated competitors on the track, the road and cross country. Rarely do distance runners excel across all three running disciplines. Getting to know Craig has made me appreciate the sacrifice that goes into being a world class athlete. His story is especially compelling given his battles through congenital kidney problems and other challenges in life.

I’ve also tried to capture the everyday adventures of runners and cyclists whose stories may not include world class performances, but have their amazing merits just the same. One of these stories was a chance encounter with Midge-Taylor Good in the wake of the cancellation of the New York City Marathon due to the devastating effects of Hurricane Sandy. Given all the training she’d done for New York, she came home and decided to turn her 26-miler into an adventure with its own character. I met her as she doffed her shoes to relax on the browning grass one November day. The well-known local runner works for Naperville Running Company and her story was shared to hundreds of people that knew her.

All these little encounters and twists of fate are evidence the world of running and cycling never sits still. People enjoy these pursuits because of the encounters they engender. That goes for the crazy soul who writes this blog. I don’t hide too many of my thoughts and some people might say that’s a risk to me personal brand in some way. But I’d rather be considered honest and a bit crazy than quiet and controlling. It’s better to be crazy than psychopathically obsessed over self-image.

Hopefully some of this writing has made you laugh, because it’s not exactly an advice column, but simply “original thoughts on running and riding.” Perhaps some of it inspires. We’ve long passed 1000 posts and 1000 followers. It is gratifying to know that this blog, written as it is from the American Midwest, is read throughout the world. Every day I can glance at the analytics and see a map of where readers live and read this blog. Australia. Africa. Asia and Europe. I wish there were 100,000 of you. But perhaps that will happen some day. Share if you will. That helps grow the audience. 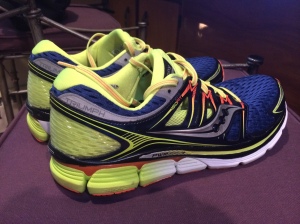 My only regret is that the convenience of receiving this blog by email as many people do, represents a lost opportunity in some ways to dialogue or reach our fellow readers. Some of the interviews resulting from this blog have come through comments and replies to the blog. I never feel short of material because this is an amazing world we live in, and just talking to people leads to sometimes surprising result. I mean, I even got a free pair of Saucony Triumph running shoes by talking up the rep as he carried a pair of pre-market shoes down the street in front of a Starbucks in Geneva, Illinois. “For me? You shouldn’t have,” I teased. And it turned out the shoes were actually my size. Now I’ve purchased a new pair because they are such good shoes.

It proves that what goes around, comes around in many ways. If you ever have the urge to have your story told, or to share some event or experience in your life, just hit REPLY and leave a comment on this blog. I’d love to make you part of this running story.

1 Response to Is anybody out there a runner or cyclist?