The fine line between Livestrong and being strong

Posted on March 28, 2013 by Christopher Cudworth 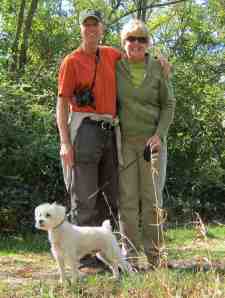 Chris, Linda and our dog Chuck on a healthy hike in a forest preserve. We’ve been married 28 years.

My wife Linda passed away last night from a long term struggle with ovarian cancer.  She as 55 years of age.

She has been trapped in wrestling match with cancer for 8 years. She won many times. From my perspective she did not even lose when it finally took her. So many blessings were fulfilled as a result of her determination and courage in the face of a long series of difficult treatment regimens that the 8 years we worked together to fend off the disease turned into a journey of enlightenment.

When she died in the presence of her two children and her husband holding her hands, the feeling was one of completion, not complete loss. She’d given so much to all of us. How can that ever be a loss?

When you say that you have been married to someone for 28 years, what does it really mean? How do two people come to love each other so long?

In our case it meant our early dating years from 1981 through 1984 were filled with weekends spent at road races around the Midwest. Linda  attended races not because I demanded that she do it, but because we were absorbed in a mutual discovery of each other’s interests. In return for my running trips, we went tent camping up through Wisconsin and Michigan.

To help me with training, Linda sometimes brought along a friend to ride bikes together during my 20 mile training runs. As race day neared and I became more protective of the state of my legs, she teased me about Golden Leg Syndrome. I’d refuse to go to a party the night before a race to avoid standing around too long. Or to hang out in a smoky bar. Or eat greasy food. I’d worked hard to get those “golden” legs and didn’t want to spoil it. But she found that funny.

That kind of humor would become a hallmark of our relationship. In fact she was always making up funny names for things. On one family reunion she assigned a name to the muscular fishing boat dock worker. She called him Mr. Boat because he was so singular about his mission of delivering fishing boats, fishing gear, etc. But the name also applied to his perpetually tanned and shiny appearance.

As mentioned, Linda was not above teasing me for my own propensity for narcissism. When fretting about a race uniform or racing shoes, she’d find some way to tell me to quit worrying about all that

She also put up with quite a few scheduling snafus. Often I’d get the race time wrong and we’d be too early or too late for the start. Once I even got the entire weekend wrong for a race and we drove early down to Oak Park, IL. from the suburbs only to figure out the race was the following weekend. She made me buy her breakfast and coffee as repayment.

When winning races it was also important to hang around for the awards ceremony. But Linda lamented that the big prizes alway seemed to be saved for the raffles. “You win the race and don’t get crap. Some trophy or such. Someone wins a raffle and they go to Hawaii. What’s up with that?”

It really was a good question. Why did race winners never receive anything of value other than a trophy?

Finally at a race in Wheaton, IL there were awards piled up along a long table. Linda wandered in with me after my victory and saw the table filled with prizes. “Maybe you’ll finally get something good,” she told me, patting me on the back. But we weren’t holding our breath. Even the 10K course had been mis-measured. We’d all run about .7 of a mile too far.

Slowly the ceremony came round to the race awards. The race thus far had given out tons of prizes ranging from health club memberships to gym bags and more. When they announced my first place finish the award came in a small box about the size of a watch. Returning to the table, I handed the box to Linda to open. She smiled and said, “Well, let’s hope it’s something nice.”

To our amazement what lay inside that little box was not a watch or something of that order, but a cheesy plastic Christmas ornament. A Marathon Santa from Hallmark. We both burst into laughter and the people seated around us gave us disapproving stares.

My father now makes an annual ritual of hanging the “Marathon Santa” on his plastic tree every year. Just to remind me not to think I was a big shot.

That little ornament turned out to symbol life’s roller coaster of high expectations and sometimes modest returns. Yet we also made the best of every situation we faced.

In many ways that had nothing to do with winning awards or material things, good fortune flowed our way in all the important aspects of life. Our children were born healthy and have turned out to be remarkable, insightful people. What gifts! And when cancer struck in the prime of her life, my wife steeled herself for survival.

During round after round of chemotherapy and surgeries over the years we worked together as if she were preparing for the race of her life. There were chemo treatments as tough or worse than any marathon. Surgeries that required training and recovery. More chemo and more surgeries. At some point Linda was forced to bear on as if she were a veteran pro athlete trying to prolong her sports career one more year. Our only goal was to give her a jersey with a number one increment higher: 47 48, 49, 50, 51, 52, 53, 54…

Yet despite doing the “gold standard” chemos and every other form of treatment, the cancer kept returning. It nearly broke her once, causing severe emotional as well as physical pain. But we ran on together, strong in spirit if not in body. And we prayed. And received answers to those prayers.

To Livestrong, be strong 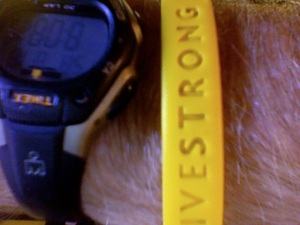 To Livestrong, you must be strong

All along I wore the Livestrong bracelet given to me by a friend just 2 weeks before her diagnosis of ovarian cancer. It still rests on my arm, but now that she is gone I’m going to find a suitable retirement. Its significance brought me through years of caregiving. I don’t care what Lance did or didn’t do anymore. I only care what the bracelet represents. Perseverance. Mutual hope. Caring enough to live, and live strong.

That was my wife Linda. She was a walker and hiker who only ran once in a while.

While dating I got her out the door for a run one day. Her long blonde hair that hung to her waist flowed behind her in the sun. I heard her stomach gurgling after a mile however, and asked when she last ate.

“I had a half a bottle of wine this afternoon,” she laughed. “Why, is that bad?’

We turned back home and finished off the wine instead of the run.

Yet Linda did run a 10K one autumn day, and on just 2 weeks of training she completed the Sycamore Pumpkinfest race in 59:00. Sub 10-minute pace on no training. That’s an athlete of sorts, in my opinion.

By the time I took up cycling Linda was well into cancer treatments. Sometimes those rides were simply ways to store up more caregiving energy. I can recall finishing a 30-mile ride and not remembering a single foot of the journey, my mind was so occupied with solving problems from how to help her eat to dealing with HMOs and paying bills. There were also periods of unemployment resulting from those gray zones where companies let you go for reasons that seem trumped up but more than likely have much to do with the vagaries of not wanting a cancer patient on the company’s health insurance. It’s a harsh world sometimes. 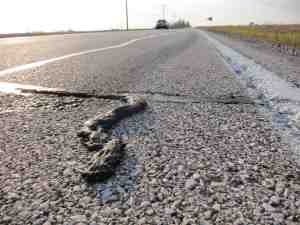 COBRA is the tarsnake of health insurance coverage. You pay more because you’re not working for a corporation.

So you go the COBRA route, the tarsnake of health insurance. Paying more than anyone else on the planet just for basic coverage. All because you don’t work for a corporation. It’s a sick dynamic, a real class discrimination case if you study it at all.

Yet we call this the so-called “free market” in America, land of the free. Well, for many of us who have experienced what it’s like to ply the free market world of health insurance, it’s only the home of the brave.

Saying goodbye to all that

When life had passed away from my wife last evening the principle emotion I felt toward my bride of 28 years was pride. I am proud of who she was, and who she helped us both become. Her strong will to live was unsurpassed in my experience, and she did never lost her sense of humor even to the very end of life. That is a gift of character. And I love her for it.

While moving her from the back bedroom to the front bedroom for better care by nurses last evening, the process proved difficult given her weakened condition. It hurt her and was disruptive. When she got settled in again and we hooked the oxygen back up, I bent close to her face and asked how she was doing. “I thought they said I wasn’t supposed to suffer,” she joked.

That’s my girl. She has always captured the best and worst of life in a few words, recognizing that nothing comes easy, but nothing’s too hard if you keep your head in the game. I love her and will miss her. But I will never, even forget her example in how to live. Be as strong as you can, and when you can’t, say a prayer and find a way to laugh about it. If at all possible, persevere.

Rest in peace, Linda. Thanks for the runs and rides.

5 Responses to The fine line between Livestrong and being strong