Not a second to waste

Posted on June 25, 2018 by Christopher Cudworth

Clipped in and battling the wind.

The wonders of technology have transformed racing to an instant gratification cycle in which we do our endurance stuff, then turn to our watches or Garmin or Strava devices and know instantly how it went down.

In those respects, technology truly is a wonderful gift. Yet in the world of triathlon, where “waves” of competitors take off at intervals, there is no exact way to know who is ahead of whom at any given point in a race. The swim often mixes competitors like Skittles in a bowl, with colored caps bobbing in the splash and spray of an early morning triathlon.

So the strategy is simple: just keep going as fast as you can. Let technology sort out the rest.

Thus I emerged from the Swim Out at yesterday’s Pleasant Prairie Sprint Triathlon in something-or-other place. My sighting during the swim had sucked. At a couple points along the way, I found myself all alone in the water off to one side. I’d stick my head up, laugh and say, quite literally, “Chris, you suck!” and head back to the main fray where semi-tragic swimmers like myself were engaged in their respective course of flailing onward toward the next buoy.

But I did, actually. And the slow trot from water to bike felt strange.

After 2:00 in transition ditching my wetsuit and donning shoes, helmet, socks, race best w/number and shades, I trit-trotted in cleats to the bike mount and noticed the fresh feeling of cool air on my wet body. That’s part of why I love to do these races. You feel alive in those moments. Even if it sucks to get up at 4:30, the experience of getting excited during the race is worth it.

But somewhat dreadfully, I realized quickly that my legs felt a bit dead. My thighs made that inaudible ‘Millennium Falcon not-making warp speed sound,” …beeeyyyyyouuurrreeeadddrrttt…so I geared down and started to spin like a wise cyclist should.

The light but long climbs were a bit of a grind. They were mostly into the wind going out, which is my Kryptonite on a non-aero bike. Still, I was passing people. It always helps to be passing people.

For some of the return trip, the wind was at our backs. The quiet hum of my bike in those moments was a pleasure to behold. But I kept getting passed by some large gal wearing a black kit. She rode a matching bike and kept piling past me at 25 mph and would then let up. I muttered to myself, “Make up your mind, darling.”

In the last three miles, I traded leads with a much younger athlete as we climbed up the hills and sped down the back side with the wind at our backs. I went into a tuck instead of pedaling and kept pace with him. Every ounce of energy counts in the end.

Most of all I was having fun. I hadn’t crushed bike leg for sure. Probably averaged just over 18 mph, maybe 19 if I was lucky. I know that I could break it all down using the results from the race, which are returned in real time at the finish, but did it really matter? I rode what I rode. Obsessing over the pace doesn’t really change anything, and I haven’t been riding with a cyclometer for a couple years. But I am soon inheriting my wife’s other Garmin. No excuses then. LOL.

Coming off the bike my high upper hamstrings always cramp up the first 40 seconds of the run. Still, I cruised through the first mile at 7:45, hit the two-mile mark at 20 seconds under 8:00 pace and set my mind on running a hard last mile.

But I had forgotten one important detail. Back at transition I had not double-knotted my shoelaces. That meant stopping in the first mile to tighten the left shoe. Then I had to tighten the right shoe just before the two-mile mark. The guy that I’d been keying on for pace had fallen behind in both places and passed me back each time I stopped to fix a shoe. Ah well, stuff like happens in a triathlon, I though to myself. You can’t remember everything. But there was a lesson to be learned. 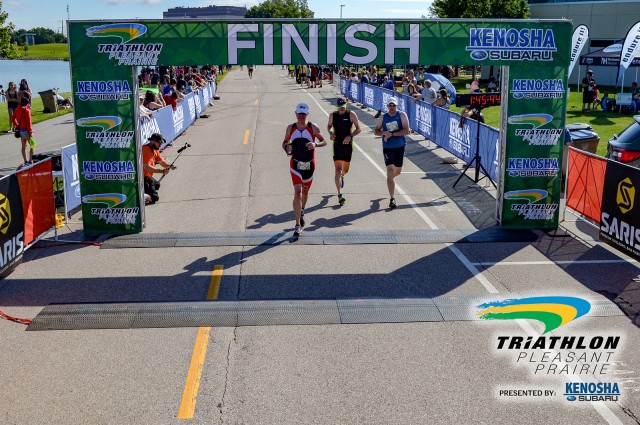 Stride for stride my closing mile partner and I chose to finish together.

Just before the two-mile mark, I’d found another guy running my pace and was pleased when I picked up the cadence and had gotten a little lead. But then I faded from lack of concentration going around the big sweeping turn that follows the lakeshore toward the RecPlex. He caught me again. Then he told me, “You’re pulling me home!”

I laughed. “Well, that wasn’t the only reason I came to this race. But if it works for you, I’m game for that.”

From then on in, we stayed stride for stride. Neither of us breached the contract and we crossed the finish line side by side.

While it was nice to almost podium in my age group, the day’s real accomplishment was sawing down what had been a massive eyesore in our backyard.

Later when I looked at the results, I openly chuckled while tracing my finger across the results sheet to see my final position (72nd overall) and age group: 4th by one second!

That’s right. I’d missed 3rd place in the race by one second. I thought of all the things I’d done during the race; the swim, the moments on the bike, the transitions and the modest push at the end of the run without a true kick and realized: one second is a helluva lotta time.

But it doesn’t matter whether you got fourth place by one second or one minute. It is what it is. And actually, our bigger priority (between Sue and I) was to book to the hotel for a shower at the hotel before checkout at noon, then head home so that I could do some needed work in the yard.

So I spent almost two hours sawing down a stubborn stump behind our house. When the job was complete, there was nothing but wood chips and sawdust strewn over the place where the ugly, humpy, dingy little stump had been.

And that was a win. I wasn’t counting the seconds or worrying about a podium finish. All that mattered was reducing that bastard stump to grit and slices of wood toast.

Christopher Cudworth is a content producer, writer and blogger with more than 25 years’ experience in B2B and B2C marketing, journalism, public relations and social media. Connect with Christopher on Twitter: @genesisfix07 and blogs at werunandride.com, therightkindofpride.com and genesisfix.wordpress.com Online portfolio: http://www.behance.net/christophercudworth
View all posts by Christopher Cudworth →
This entry was posted in aging, cycling, tri-bikes, triathlete, triathlon, triathlons and tagged podium finish, triathlon, triathlon transition, when every second counts. Bookmark the permalink.