Posted on June 4, 2018 by Christopher Cudworth 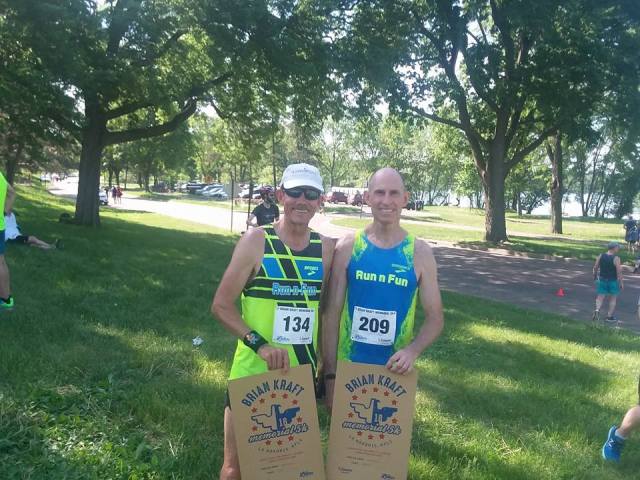 A friend from college named Dan Johnson recently ran a 5:26 mile. He’s coming up on sixty years old, and that’s a darned fast time for a man his age. He also recently won a big age group 10K award.

“What do you know…” he wrote on Facebook. “Senior Grand Master 10K Champion. Running to and from work this past winter and joining my Road Warriors running buddies has really helped me become more competitive.”

Dan runs and competes with a former competitor from Wartburg College named Bob Paxton, another sixty-year-old guy with good genes and a commitment to running fast in old age.

Think about Dan’s mile time for a moment. Running 5:26 at nearly age sixty still requires the same quarter miles splits it took to run that time back in 7th grade. That’s a forty year span of time that many cannot bridge.

And granted, most of us who ran in college ran 5:00 pace or faster for five whole miles, and farther. But age creeps up on you. The world record for a mile at age 60+ is around 4:51. That’s still forty seconds faster than Dan is running, but again, that’s the world record for the distance. It shows you how respectable Dan and Bob’s times really are, because both are running times in the lower 5:20s.

Perhaps it’s just the clear Minnesota air up there? Or maybe they’re drinking reindeer milk, like Lasse Viren once did (and I kid)?

People are always looking for reasons why some people run faster than others. But mostly it’s just putting in the miles and staying injury free. In any case, I truly admire what Dan and Bob are doing in their supposed dotage. They are likely faster than 99% of the running population. And they’re supposedly OLD.

I was somewhat slower in my 5K this past weekend. Last year at the Race to Market I managed a time of 20:50, which is a sub-7:00 mile pace. This year coming through the knee surgery in April I lost some training time, especially speed work, and ran a 22:26 on the same course this year. I got out in 6:47 and then slowed.

That’s 7:14 mile pace on average. Sue and I both won our age group at the Race to Market 5K to earn a little hardware.

For the race I wore my New Balance 880 shoes that are a bit firmer for that racing feel. Now those are nothing like the Nike Air-Edge racing flats that I wore back in 1984. Those were so light and responsive it was speed personified just lacing them on. And I was so fit and light. Those days are gone but I have lost 10 lbs this spring. My orthotics probably weight two pounds a piece? So the time was not terrible for me given the overall changes in physical ‘balance’ (weight to power ration) I now live with.

That’s actually the pace I want to run in my duathlons and triathlons to be respectable and have a chance at some hardware. If I can run 7:10 pace, cycle near 20 mph for a 16-25 mile distance and swim at 2:00 per hundred I’ll be in the hunt for age-group podiums as long as my transitions shrink a little.

I’m having fun at this. So while I’m not driven to kill myself these days, the training is still an eager challenge for the most part. Sue and I rode 41 miles the day after our race and managed 17.3 mph average in 20 mph winds. We rode 20 miles northwest into the stiff and buffeting wind with 1325 feet in climbing, then turned around with the wind and came home again. That felt a bit nicer, I can tell you.

My legs were genuinely tired those first five miles after racing the previous day. Then they loosened up for the middle thirty miles, and then I tired out again the last five. It was tough in that wind to find time to get much nutrition. I nibbled a bit on the way home but that was probably not enough. Sue pulled ahead of me as we neared home, but I caught back on using a couple downhills toward the finish. She’s a strong bike rider and was cooking along on her tri-bike in aero position. When she gets rolling it can be tough for me to keep up on a road bike. Or perhaps I’m just imagining that.

We put our legs to good use in gardening this weekend as well. Sue was almost back in aero again on that little gardening cart. That afternoon and the next we finished our backyard gardening makeover and it felt so good to have a balance of activities over the weekend that I can say I felt happy and actualized by Sunday evening.

Balance is what I live for in everything I do, and whether that balance is New or Old, I still love it.