Time in the Saddle Alone (TITSA)

Posted on March 16, 2018 by Christopher Cudworth

Last night I parked the car at the train station so that my wife could drive it home after her commute. That gave me the chance to ride 20+ miles during the hour and a half of good light still available.

Riding north from Geneva, I climbed up to 834 feet above sea level. The view from up there used to be quite dramatic forty years ago. But between urban development and the growth of trees, the City of Chicago 35 miles away is no longer visible.

I rode up those hills steady and smart. Full pedal strokes. No mashing. Used the full pull of the shoe on the cleat.

Up on the flats, the wind was stiff out of the north as I rode west. It pushed me and relented as I went along. There was no need to fight it. My goal was time in the saddle. Trust the legs will gain strength with the hours. Settle yourself on the bike. Ride in a good position.

This is the sane way to get into cycling condition. To find good form, you have to practice it. Time in the saddle is how you get there.

So is time alone in the saddle. It’s far too easy in the early season to get caught up with a group that turns you into mashed potatoes halfway through the ride. There’s time for all that once you have 10-15 rides in you. Then it makes sense to get pulled along, and do some pulls yourself.

Before that, the body doesn’t know what to make of the extremes. No pro goes out and does a four-hour ride at max effort to start the season! Why do amateur riders tend to do that to each other? It makes no sense.

Though I’ve ridden now for 15 years, I still know more about running than about cycling. But I know that it never paid off to run at maximum effort all the time. It paid instead to train slow for the bulk of the early season and build a base. Then progressively add intensity over a period of weeks. That’s how you get in shape.

But cyclists often pride themselves on pushing to extremes and not asking any questions. It seems to be part of the unspoken psychology of the sport that one should never inquire about the suspected pace, or worse yet, dare to question or complain whatever goes on with a group. It’s considered better form for some insane reason to hang on until the legs give out and eventually get dropped than to ask, “Hey, what’s the planned pace today?” That’s like a confession of weakness.

I have to say that triathletes can be even worse about this dynamic than traditional cyclists. Once a tri-guy or gal gets down in aero, they might as well be encased in a space suit. They tend enter their own world, and riding in the draft is a foreign concept to many. That’s not true for all of them, but I think you all know what I mean.

Fortunately, there are exceptions. 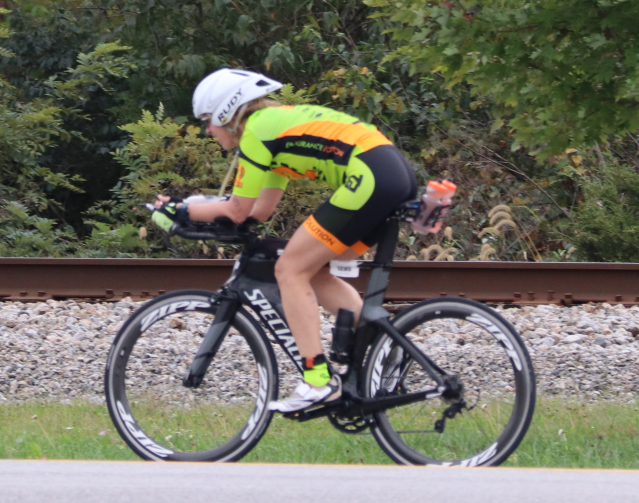 Because that’s not the case with my wife Sue, as we’ve worked out a system of riding together no matter what bike she’s on. I tend to ride in her draft on longer rides because I don’t ride with aero bars and she’s not interested in riding in my draft as a matter of training principles. So we share some of the pulls, but not too much. Many days she’s frankly stronger than me, but there are days when I end up guiding us home as well. Last summer we did rides of three and four and even five hours together. Not every second was perfect, but we also split off sometimes to get some riding in alone. Good partners know how to compromise. I think we do that well.

It’s too bad when cyclists fall into the trap of riding whatever pace their insane buddies choose to hit on any given day. That’s why time in the saddle alone (TITSA) can also be so important to your own fitness and sanity. There’s an honesty and patience that comes with making your own way through the spring winds, over that first season of hills and home on the flats with the wind behind your back. It’s all liberating. And finding your pace and space in the world without the initial pressures of riding with others is a good thing.

So the ride last night was a nice little base-builder that provided a chance to think ahead to when the weather gets warmer and the legs have more juice than they do now. TITSA is the way to go.

Christopher Cudworth is a content producer, writer and blogger with more than 25 years’ experience in B2B and B2C marketing, journalism, public relations and social media. Connect with Christopher on Twitter: @genesisfix07 and blogs at werunandride.com, therightkindofpride.com and genesisfix.wordpress.com Online portfolio: http://www.behance.net/christophercudworth
View all posts by Christopher Cudworth →
This entry was posted in tri-bikes, triathlete, triathlon, triathlons, Uncategorized and tagged cycling, time in the saddle, time in the saddle alone, TITS, TITSA, triathlon training. Bookmark the permalink.

1 Response to Time in the Saddle Alone (TITSA)