Nude selfies and other truth-telling

Posted on January 18, 2018 by Christopher Cudworth

Don’t worry. You’ll find no nude selfies of me in today’s blog.

But let’s be honest here. We all take them once in a while. If not nude, then at least partially clothed to check on our bodies. How do we look? 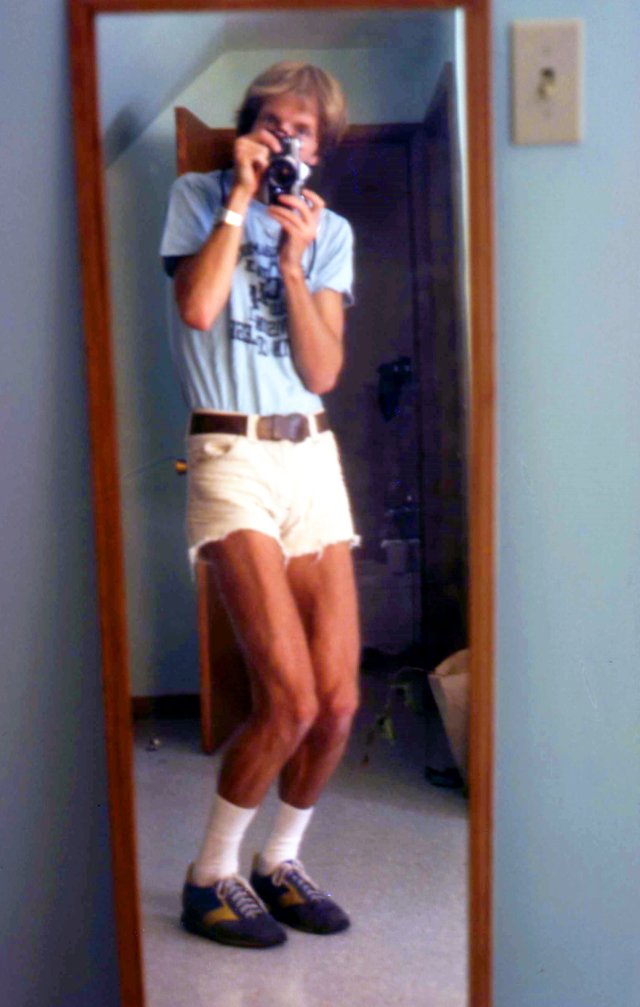 Taking photos of ourselves is a patent form of truth-telling or self-revelation. Way back in 1979 I snapped this photo of myself in a mirror with my Olympus OM-1 camera. I wore white cutoff jeans and a blue running tee shirt. My hair was blonde from the summer sun and my thighs tanned from hundreds of miles running in the short shorts of the era. I thought I looked pretty good. 6’1″, 140 lbs.

Those were fun times, and those shoes I’m wearing are Brooks Varus Wedge, one of first running shoes designed with an orthotic dimension inside. Our coach bought them for all of us during cross country season when we came down with achilles problems after a particularly hard interval workout done on a country road with a profound slant to the asphalt.

It was a solution that worked for some of us because it helped us supinate (foot angled outward) rather than pronate (foot collapsing inward.) To tell the truth that was a broad-based attempt at curing injury. For some, it did not work at all. Yet that step toward achilles health enabled us to get through a tough period in training and go on to place second in the NCAA Division III National meet.

So much truth-telling is like that. We make up a narrative for ourselves that covers a given moment in time and that’s what we come to believe. It happens even in the present. Which is why nude selfies can be such a shock to the senses.

Over time we learn how to take pictures that are far more flattering. Every guy who takes a dick pic sooner or later learns how to use the camera to make his unit look huge. Women learn how to make their breasts or butts look inviting. Nude selfies are an art unto themselves.

We learn to flatter ourselves on many fronts. It’s a self-survival tactic. Craving feedback and compliments or a cure for loneliness, some take the nude selfie thing a bit further and willingly post their nude selfies on sites that draw millions upon millions of views. One could say that it’s a form of truth-telling. Certainly there’s no excuse for anyone growing up these days not to know what the human body really looks like.

Has it ruined our culture? Turned kids into absolute sex fiends? Probably no worse than forty, sixty or one-hundred years ago in the 1920s. The Roaring Twenties, remember? Ever seen the movie Chicago? Lust is evergreen, folks. Nudity and the perpetual tease is part of the human race going all the way back to bible times. Even Adam and Eve walked around naked, and King David lusted after Bathsheba,

2 Samuel 11:3
and David sent someone to find out about her. The man said, “She is Bathsheba, the daughter of Eliam and the wife of Uriah the Hittite.”

Nudity is ostensibly able to reveal the spirit and the soul. The human body is thus the subject of thousands of years of art. One of the most revelatory experiences I’ve ever had was to sit in a Life Drawing class six hours a day during a January Interim term. The class had live nude models, both male and female. Our instructor played classical music over the sound system and there were times when I’d completely lose myself in the process of studying the human figure while trying to balance line, shading and texture. There was nothing sexual about it.

And I remember a pose the model took in which she was curled almost like child pose in yoga. Her arms were tucked around her head. The slope of her back was so wonderful and clean. Her nude figure was pale and serene. The glimpse of her vagina from behind was both mysterious and so commonly real that it defied the notion of sexuality. It was just part of her. An honest part, for sure. But just part.

These days, with the Internet rife with billions of women and men in every pose imaginable, the honesty is almost too much at times. It can numb the senses to try to be creative in the face of all that.

Yet art can lift us past the taboo into the realm where honesty and truth are far more engaging than the basic instincts of lurid attention or lust. Those have their purpose in this world. There is nothing wrong with sex. It depends on context and the focus of the moment. People who lose sight of that have problems engaging with the real world. That’s why some object so strongly to pornography.

But it’s still just the human body. I well recall drawing the shape of a man’s penis the first time in art class. The flaccid fall of the shaft. The round turn of the testicles. It was just that. The women in the class squirmed at first while facing the model and staring at the penis. Then it all became drawing what they saw rather than what they sought not to encounter. Penises are honestly sort of sad in some sense. But as Henry Miller once wrote, they can also look downright murderous.

Years later I went back to my college campus and while there, visited the art studio of a student in the art program. My college art instructor was by then a personal friend who showed me around the new art building and the row of small houses converted for use by advanced students as personal workshops. We stepped into one of those studios to encounter large, colorful paintings featuring bold male nudes sporting huge erections. The works were actually executed quite well, so you could not miss the subject matter. We both kind of chuckled and realized how much times had changed.

Was it pornography..?  “the portrayal of sexual subject matter for the purpose of sexual arousal.”?  It didn’t matter. An artist has a right to portray what they like, or don’t like, about the human condition. Sometimes such imagery is used for the opposite purpose. There are passages in the bible that depict women lusting after men with genitals the size of donkeys. This is intended to convey a sense of depravity and lack of self-control.

Or was it just plain jealousy? There’s a hint of that in the passage too. The bible was written by men, after all. Many men are often intimidated by the virility of their perceived enemies or those they fear might steal their women.

The inevitable instinct of all nude selfies and any such truth-telling is that we seek to compare ourselves with others, and with ourselves.

It’s all about how can we make ourselves look better to others, and to ourselves. Of course that’s a constant process. And just like craving junk food versus real food, sometimes we deceive ourselves.

Go ahead and take a surf through the Instagram app and you’ll find thousands of fitness buffs posing to show off their BEFORE and AFTER bodies. Some of the results really are impressive. Then the admiration gets tossed around, and it crosses all lines of sex and gender. “

You go girl!” shouts one woman to another woman.

“Nice pecs bro!'”  says one admiring male to another.

It’s all a form of truth-telling. Yet it’s also the truth we manufacture for ourselves that ultimate determines who we are. That’s the really hard thing to get past. To accept. To embrace. And to transcend.

Some say the camera doesn’t lie. But that’s not really true either. We can make  a camera do almost anything we want. The honesty to know and admit that fact is the truly rare commodity in this world.

To move past our vanity and find beauty in that honesty is the sexiest thing on earth. Try it sometime.