Home away from home

Posted on November 4, 2016 by Christopher Cudworth 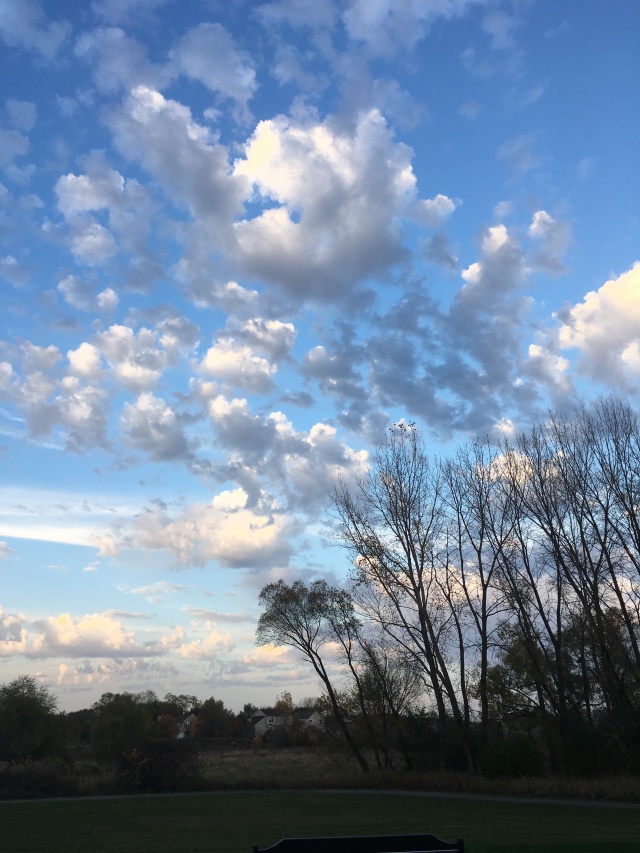 The view out my back window including the bike trail that leads toward Nelson Lake Marsh.

One of the side benefits of moving to our new place on the border of North Aurora and Batavia is its proximity to a natural area named Dick Young Forest Preserve. Within the preserve is a remnant prairie marsh called Nelson Lake. It is a classic Illinois wetland ringed with cattails, and at one time the area held rare species of gentians and other plants found only in such habitats where boggy soils turn acidic and things grow that could not grow other places.

The lake was once the site of a peat mining operation. There were gravel roads on one side of its perimeter. In fall, duck hunters would lease the right to enter the property and shoot ducks and geese. There were carefully constructed blinds all around the lake that stood all year after hunting season. A tiny little shed at the apex of the trail would house small wooden skiffs on which the hunters would push out into the lake to do jump shooting.

That was more than forty years ago. Since that time the lake and its surrounding farm fields and woods have all been purchased by the county to form Dick Young Forest Preserve. The man for whom the preserve is named was a progressive naturalist and botanist whose knowledge of native plants in Illinois was unparalleled.

It was the work of Dick Young that defined the reasons for preservation of the marsh and woods. Since the addition of nearly a thousand acres of land around the wetlands, a number of restoration projects has been implemented. One of these is the propagation of a large prairie. There are also oaks being planted into this prairie, and the management plan is to recreate the savanna habitat that once dominated northern Illinois. 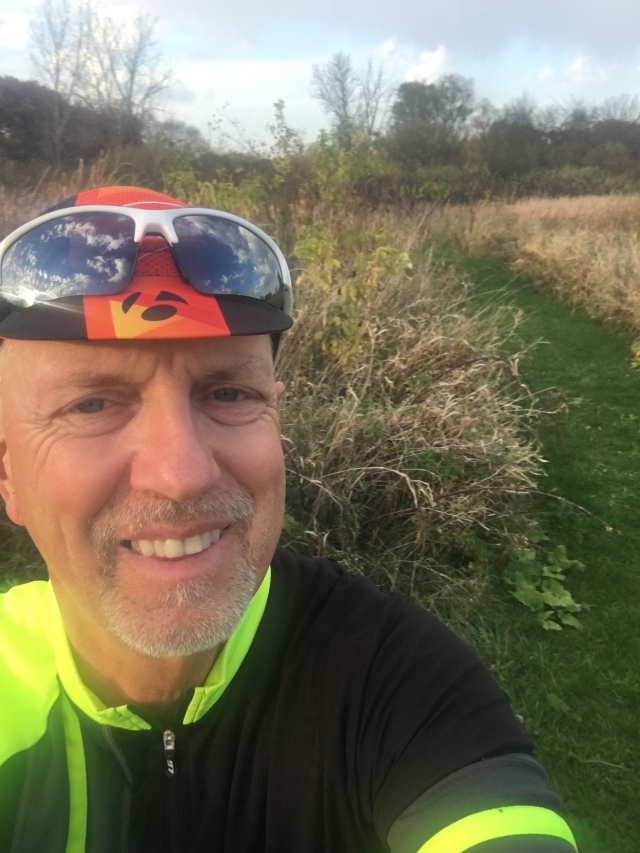 Mountain biking on the trails in Dick Young Forest Preserve

Throughout these natural areas is a network of trails. Some are principally dirt or grass. These are good for running and mountain biking. Now that I live a mere 1.5 miles away from the preserve, I’ll probably spend more time there than ever. Running the five-mile perimeter is a joy in any season. Of course when snow falls the running has to go, but a set of cross country skis is all that is needed to cruise around the lake.

Each winter I also don heavy boots and tromp across the frozen lake. The surface area of this environment has been shrinking the last few years. Cattails have encroached and siltation has kicked in. The lake is shrinking too fast for its own good. So I wrote the county and had a discussion with the natural areas manager. He informed me that there is a plan to consider a water retention structure to keep the lake level higher. Formerly there were beavers that moved in. Their natural dams raised the water levels throughout the natural areas complex. Somehow the beavers mysteriously disappeared.

There is a chance some local residents don’t like the lake to be so high. Over the years I’ve also encountered trappers working illegally in the marsh. They catch beavers and muskrats to sell the skins. Perhaps they don’t care if their simple greed has such negative effects on the ecosystem of Nelson Lake Marsh. One trapper pointed a gun at me years ago, threatening me to move on even though I was standing on public property, and so was he. Such is the expression of selfish motives. 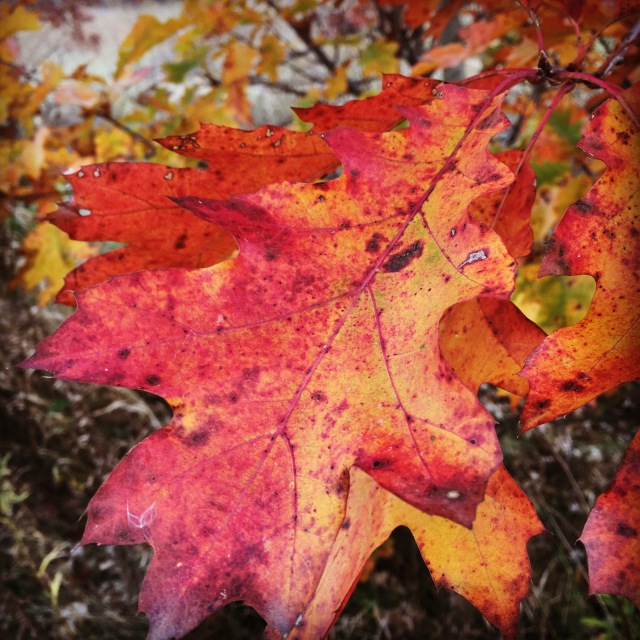 An oak leaf puts on a show in late autumn

It was heartening to talk with the habitat manager and learn that the county is concerned for the long term health of Nelson Lake Marsh. The process of natural succession at the lake has been nudged along by the incursion of invasive species of rushes that further clog the marsh. A drought several years ago completely dried up the lake for a season. That let other plant species push into the lake bottom, further displaced water and increasing siltation.

I think about all these things when I run or ride around the lake. I’ve been visiting the property for more than 35 years. It’s a part of me in many ways. I’ve seen rare species of birds and beautiful types such as least bittern, Virginia rail and peregrine falcon. Sandhill cranes breed in the marsh, and so have rare species of hawk such as harrier. These are precious resources in Illinois, remnants of a once-thriving prairie ecosystem that stretch from Chicago to Moline. The Illinois prairie is nearly extinct these days. Only 1/10th of one percent of the prairie that once existed still remains. That’s why the marsh feels so damned precious.

When I’m running or riding out there, all these memories come through from my subconscious to conscious mind. The ashes of my loved ones actually are planted on that ground. So are the important foundations of my memory, and self-identity. Yes, a place in the world can mean that much to someone. 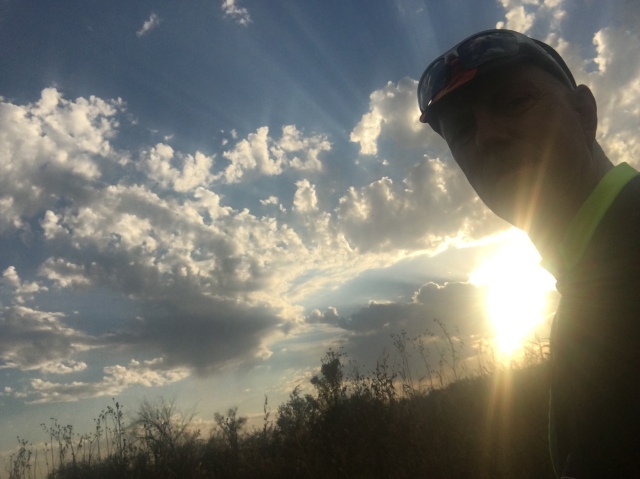 Many times I’ve stayed past twilight to witness the setting of sun and birds in the reeds.

That’s why I grieved at the thought that a place in which I’ve spent so much time might be occluded. Land management practices change over the years, and political priorities shift by the philosophy of those in charge. Yet our county approved a $70M forest preserve referendum years ago, and both sides of the political aisle have taken a role in purchasing and planning land purchases. Some of that money was actually spent buying critical farmland to protect it from development. All this is proof that political opponents can get along when the cause is worthy enough.

So I run and ride those trails with gratitude. There have been many changes over the years, with some trails left to grow over and new ones installed to host more people traffic. I admit to a wistful feeling in realizing that the old ways of moving about at the preserve have changed. So many fall evenings were spent walking the woodland trail out to the west-side observation deck at twilight. Now the trees have grown up in front of the deck and it’s not all that useful to birders.

But I think of one early December day in particular. The weather had stayed warm through the 5th, and hundreds of duck of more than 20 species were still hanging out on the lake. I crept all the way to the edge of the cattail margins and crouched down on the haunches of a fallen willow stump. The air was perfectly still, and the voices of all those ducks peeping and quacking could be heard clearly across the water. The temps even at dusk were 75 degrees. It felt like that scene could last forever.

But overnight, a massive storm blew in with temperatures dropping well below freezing. The change in the lake the next day was profound. The ducks were gone. The lake had skimmed over with a rough, cloudy surface of ice. All was silent. Winter had arrived. 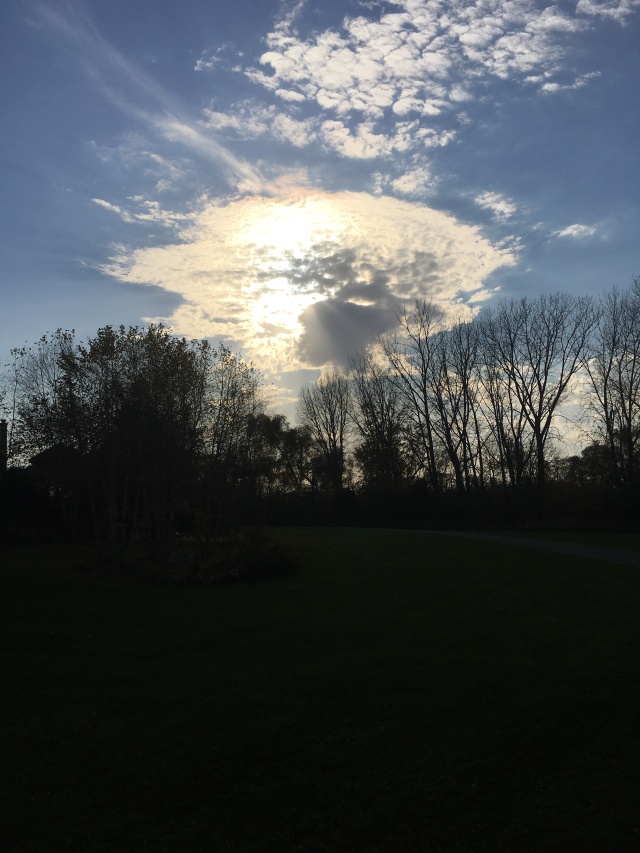 Always there are big wheels turning at a natural area.

Nature is unforgiving that way. I’ve seen it come and go across the face of that landscape in many ways over the years. Running through the prairie on hot summer days can bring you to a standstill if you don’t have enough water in your system. The spring rains on hard winter ground make a loud noise, and March winds tear the cattails apart, sending even more seeds to do their dirty work. Human beings course through these conditions on their own terms. At times you feel connected to the earth. At others, you feel like an invader or some foreign creature. And you are, for the most part.

Still the times I’ve felt in tune with that landscape are precious and wonderful. Now that I live even closer, perhaps that relationship can grow in new ways. I hope to play a role in the new management plan, and love to lead hikes for people who want to discover what nature is all about, and where to find it. That place is my home away from home, and likely always will be.