Feeling it for the Cubs

Posted on November 3, 2016 by Christopher Cudworth

As a longtime resident of the Chicago baseball market, one cannot help absorb some of the painful losing history of the Cubs. Now that they have finally, finally won a World Series title, and the jinx is gone, the city and its residents can breathe a little deeper.

It’s not an unfamiliar scene. Our family jumped on the Chicago White Sox bandwagon when the team won the World Series a decade ago. This is your prerogative, to jump on the bandwagon for a sports team when you’ve lived in a metropolitan area long enough. If you put up with the moaning and groaning when things go bad with local sports teams, you deserve to go for the ride when the bandwagon kicks into gear.

But when it comes to the Chicago Cubs, the bandwagon has pulled in so many times and the wheels have always come off. Back in 1984 or so, I recall standing in an Iowa bar during a college reunion event watching the TV as the Cubs were playing the San Diego Padres. We had watched the first couple games back at home, and the Cubs had murdered them with runs. But then the Padres’ Will Clark and Steve Garvey started pounding out hits and the damned Cubs found a way to lose it.

32 years have passed since then. The Cubs have sniffed the National league pennant a few times over the years, but the results have always stunk in the end.

Last night the game wore into the depth of night, and I was tired. When the rains that had passed through Chicago earlier in the day descended on Cleveland, I gave up the ghost and went to bed. I laughed hard when checking Facebook before nodding off to sleep because my daughter was feeling the same sentiment. “Not the Tarp!” she wrote. That made me laugh.

Meanwhile, my son Evan was actually in attendance at the game. Not because he drove all the way from Chicago to Cleveland, but because he lives in the Lakeside district of Cleveland right now, just a few miles from the stadium.

But he lived in the very heart of Chicago’s loop for several years after attending college at the University of Chicago. The city got into his blood, and by proxy, a bit of Cubs blue flows through his veins as a result. 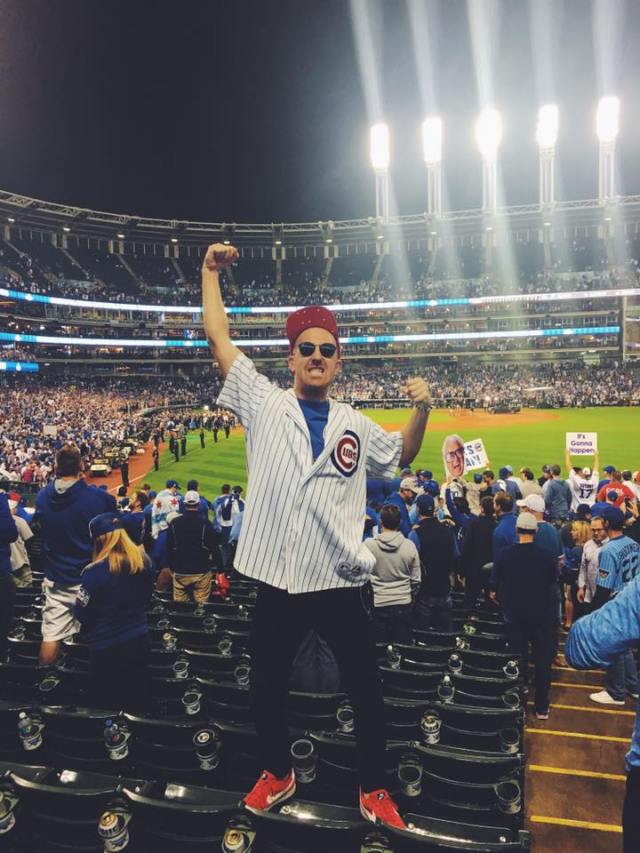 Evan isn’t some huge sports fan. But he is a guy with a knack for scoring tickets to big events. So it makes sense that he was in attendance during the biggest game in Chicago Cubs history. Late in the game, Evan roamed the decks of Cleveland Stadium with his Facebook Live feed going crazy. Dude, for a so-called non-sports-fan, you are the ultimate wizard at being in the right place at the right time.

The kid knows how to dance

That surprises no one in our family. The kid has danced his way down the streets of New York dressed as a Gingerbread Man for the Macy’s Day Parade. He’s gotten to Blackhawks games when the tickets were tough to get in Stanley Cup seasons. Evan also travels to Burning Man each summer, dancing his way through heat and dust and mania to a near religious experience.When he’s not dancing in the dust, he’s rocking some rave party through the night in New York or whatever city or group of friends wants to join in the fun. When Evan can’t find a bandwagon to join, he makes his own.

And as such, some of us live a bit vicariously through our kids. Of course, when one is jumping on bandwagons it doesn’t always work out like you want it to. Evan once climbed on a train with a bunch of friends from the University of Chicago who wanted to attend a Notre Dame football game in South Bend. As I recall, he wore only a tee shirt for the trip and the weather turned cold and wet. It was a miserable day. As a parent, you cringe on hearing such news. But we also can’t live our lives or make all choices for our children.

Just ask Joe Maddon, the Cubs manager. It’s his job to raise the team right, but in the end, the players have to go out and execute. There’s a huge moral message hidden in all this Cubs stuff.

Out in the elements

My son is also a runner. Last spring he was going to run a marathon, but did not have enough time to train for the longer event. So he ran the half-marathon in Cleveland this past spring and the conditions turned out to be worse than awful. During the race it hailed, snowed, rained and thundered. Lightning flashed and he was ultimately trapped out in an open field waiting for his friends to finish the race. The hail was beating on his running hat and stripping hair off his legs. As a runner, I totally understood how really cold and devastating a post-race chill can be. But he survived.

That cold, chilly feeling reminds me of the afternoon I spent in the company of a friend at a Chicago Cubs game twenty years ago. Our tickets were decent enough, right behind home plate. But the wind was “blowing in” that day. It was mid-May, which meant the cold drafts coming off Lake Michigan were chilly, wet and sullen. Temperatures were stuck at 42 degrees. We sat there hunched up in our jackets cheering for the Cubs. Hot chocolate was the order of the day, and we drank lots of it. To make matters worse, they lost. But we stuck it out. 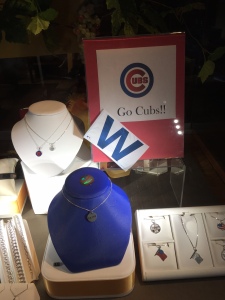 So I believe that constitutes the groundwork for a “real fan” if you’re looking for credentials. There have been quite a few other games over the years as well. I can’t call myself a True Cubs Fan in the sense that I follow every game and result, but I have been a fan of the Cubs through good times and bad. I read their tales of trades in the papers and console my friends when their team suffers. Except when I tease them. Which is just as fun.

My brain holds some arcane knowledge of the team’s history dating back to 1969, when my Glenn Beckert and Don Kessinger baseball cards were prized even though I lived near Philadelphia then. I was Yankees fan from having grown up in New York State. But one of my friends at ten years old adored his Chicago Cubs even though we lived in Lancaster, Pennsylvania. Go figure.

So it was a simple little joy to wake up this morning and hear from my fiancee that the Cubs had indeed won the World Series. It means there is something right with the world in some way. Forget the owners and their big league investments, and how much money it takes to buy a champion. The sports radio guys will blather for days now about how to keep the team together, or who needs to be traded. I find it all disgusting. They’ll rip the manager for pulling Kyle Hendricks too early in the game and they’ll criticize the baserunning and the like. Sports radio is the cesspool of sports fandom as far as I can see. Worse than politics, in many respects.

My taste for baseball trends more toward the innocent joys of watching a great player make a backhand grab of a hard grounder behind second base, or the crisp delight of a hard line drive ripped up the foul line. When I settle in to watch baseball, I watch baseball. The Cubs have been a fun and rewarding baseball team to watch this year. They were so good at the game they actually won the World Series. There may be a touch of hometown pride in that, and I’m feeling it for the Cubs.

But it’s November, for God’s Sake. Thanksgiving is a mere three weeks away. These sports seasons go on far too long. Hockey plays its championships in June. Football is like a virus that has invaded the bloodstream of America. The NBA feeds upon itself until the players run out of gas in the early heat of summer. No wonder they smoke so much pot.

So it’s with a bit of relief that we can all say “the Chicago Cubs have finally done it,” and are done for the year. Wait ’til next year can wait. Forever? Of course, spring training starts in February. That’s not that far away.

The only people crazier about their sports are endurance athletes like us. We never seem to stop training, racing or competing. We roll from the Tour to Kona without batting an eye. It’s the season that never ends.

Christopher Cudworth is a content producer, writer and blogger with more than 25 years’ experience in B2B and B2C marketing, journalism, public relations and social media. Connect with Christopher on Twitter: @genesisfix07 and blogs at werunandride.com, therightkindofpride.com and genesisfix.wordpress.com Online portfolio: http://www.behance.net/christophercudworth
View all posts by Christopher Cudworth →
This entry was posted in Uncategorized and tagged Chicago, Feeling it for the Cubs, world series. Bookmark the permalink.