Posted on January 25, 2016 by Christopher Cudworth

All the focus on the so-called Oregon militia got me thinking about the difference between their “mission” and the tradition of Oregon runners.

If you’ve followed running over the last 40 years you know the legend of Steve Prefontaine. He was a firebrand runner with a penchant for taking the lead and pushing the pace no matter what. It likely cost him a medal in the 1972 Olympics, but that only added to his legacy. Watch the video in the link (it will pop up) and consider how many times Pre battled back against more mature, accomplished runners. Savvy Europeans hardened by training and sharp racing beat him. But it wasn’t for lack of courage. 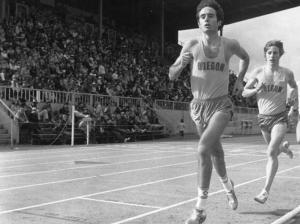 That’s the heart of the Oregon tradition when it comes to runners. Many others have followed, including Alberto Salazar, another gutty competitor who battled the likes of Henry Rono to make themselves better.

It’s interesting that men like Pre and Salazar have also affected the world of running in other ways. Pre stood up against a corrupt and selfish AAU that would not allow runners to make a living from their sport. Looking back in time, that seems antiquated in some respects. Yet there were real costs to those rules, essentially taking away the earning power for people whose primary talent was running. Where is the social justice in that?

Today, men like Alberto Salazar and his runners benefit greatly from the protests of Pre and Frank Shorter and other runners from the early 70s who had the guts to go against a system of athletic governance that had both monetary and competitive costs. Runners also were not allowed to even run where they wanted and against whom they wanted because of AAU rules. This ostensible forbearance stemmed from both greed and a falsely “pure” notion of what athletics was based on the idea that forcing runners to remain “amateurs” somehow made them better people.

There were politics involved as well. America’s obsessive competition with the Soviet Union came into play. From Sputniks to 10K runners, there was not an effort made in the era from the 50s through the 70s that was not somehow a comparison to the “Russians” or the Eastern bloc.

These overcompensations were what Prefontaine set out to correct. That’s how Oregon came to represent the liberality of running as a sport. He helped lead efforts to start a professional track circuit. He “illegally” brought in runners to compete on the Oregon track to show that AAU that no harm could come from honest competition. His leadership style always involved throwing his guts into everything he did.

So it’s an interesting comparison to consider how a man like Steven Prefontaine, also a fabulous drinker and party guy, compares in legacy to the history being written as we speak by the so-called Oregon militia.

You know the history by now. Ranchers angry at the government have refused to pay leasing rights to run cattle on public land. This is a tradition that is complicit with the Bureau of Land Management in large swaths of the American West. Author Edward Abbey hated this tradition, because he despised despoilation of wild and public lands by stupid dumb beasts like cattle.

Raising cattle and other meats requires lots of water as well as millions of acres of land. Yet the macho and sentimental tradition of ranchers raising cattle to feed the rest of us with meat is firmly embedded in the American culture. So the romantic idea of the independent ranch owner running cows from his (or her) own land from range to market is somewhat sheltered from the reality that many of those ranchers depend on grazing rights granted on public land. They pay a fee for this right, and when they refuse to pay that fee, the government has a right to block their cattle from grazing on public lands. 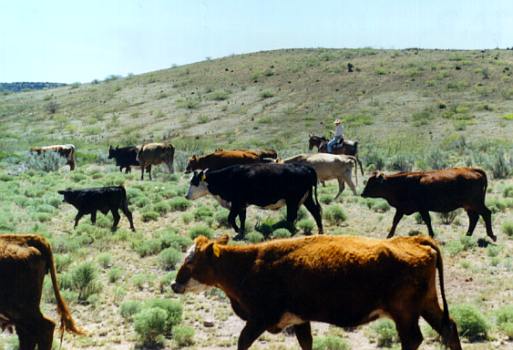 And that’s where participants in the Oregon “militia” come into play. Their notion of independence and the right to use public lands for grazing rights or any other purpose conflicts with the laws governing our nation. They view our government as an oppressor, making it more difficult to make a living. Conservatives have thus sided with ranchers spitting venom at the government. This is based in part on the ugly meme begun by President Ronald Reagan, a favorite among Republicans, who made the specious claim: “government is not the solution to our problems, government is the problem.”

Now we have a protest in progress based on the idea that the government is out to get a bunch of people for refusing to pay grazing fees. And other reasons cobbled together into a mad, ugly whole. These people are now advocating a form of anarchy in the face of governmental rule. Interestingly, they share a taste for anarchy with their worst enemy, the late Edward Abbey, who said: “Anarchism is founded on the observation that since few men are wise enough to rule themselves, even fewer are wise enough to rule

So we begin to see how these strains of independence converge out in Oregon. A man like Steve Prefontaine hated the constraints of the AAU, the former “government” of the AAU. Yet he was also fiercely loyal to the institution he represented, even to the point where the Oregon track is known as the “house that Pre built.”

And then you have Edward Abbey, an advocate for wilderness. He had little patience for those who by their selfish motives would ruin it.

And then you have these latter-day militants, whose objections to government and desire for self-rule would be quaintly patriotic if they weren’t also so misguidedly wrong in both perception and law.

Because while they’ve taken over the Malheur sanctuary, the real owners of that land, which is us, are being denied access. The Oregon militia obviously fails to grasp or respect this basic fact. Their “higher purpose” flouts both the economic realities of public land and the philosophical paradigm behind them. That is, their romantic claim to “ownership” is an outright lie.

And that’s the plain difference. Steve Prefontaine only wanted the right for runners to earn a living doing what they do best. That was being denied by the AAU. Edward Abbey wanted American lands to be protected from wanton abuse and overgrazing, which caused major problems ranging from erosion to soil breakdown. He wanted to protect the land owned by the public.

But the Oregon militia wantonly chooses to ignore the laws governing public land in order to take and use property for their own purposes. They’ve clearly done exactly that in their current protest. They are not justified in this venture. They are rightly being mocked for doing so.

These actions are also clearly mixed with partisan political notions…for example, that the current administration is out to “take their guns” despite the fact that no such actions are even remotely on the political radar.

Plainly, these are fearful, angry and largely confused people whose romantic notions of anarchy seem to imitate the American Revolution. In fact, their purposes stand in direct contrast to the reasons why the American government was originally formed.

To create a unit of obvious tyranny, as the Oregon militia has done, in order to combat a perceived tyranny that is simply respecting the practices of common law in terms of public land, is the ultimate demonstration of stupidity.

We can thank John Lennon for spotting that tendency years ago.

See, men like Steve Prefontaine understood the real meaning of revolution. His plan was to give rights that were deserved, yet never granted. And men like Edward Abbey loved anarchy for its symbolic virtues. He represented a revolution of the soul of the land. That which was originally granted through its very existence.

The Oregon militia, by contrast, represents a revolution of selfish aims and ultimate irresponsibility. There is nothing admirable about this brand of movement at all. It is symptomatic of a conservative instinct to “take back America,” and from who? The very people that have worked hardest to make it what it truly should be. A nation based on the public and common good. Not one of special interests, or white privilege. Not one of one religion, but of any religion that might exist within its borders, or none at all.

And not a nation of people worshipping only cowboys, or cows, to the point where that worship allows a small group of ranchers to run their animals on publicly owned lands for free. Or allows people to carry guns around society as an unregulated militia. It’s time we all fought back against the wacky revolutionaries claiming America’s legacy for its own.