Posted on November 24, 2015 by Christopher Cudworth

In a few weeks, my life will change once again. That’s when our dog Chuck will begin living with my daughter Emily. She’s been working toward this goal for some time, and is finally getting out on her own with a condo where she can have Chuck move in.

Our dog Chuck has been a shared part of all our lives for six years now. He was originally discovered on the streets of Chicago by my son Evan and some friends at a very late hour. They brought him back to their fraternity house and cleaned him up. Reportedly he was covered in white paint, cold and shivering from the cold spring air.

They held a beer bash to raise funds for his vet bills and Chuck lived in the fraternity house with my son for several months. He got the name Chuck because the guy who owned the frat house was named Chuck. My politically savvy son named the Dog after the frat house owner who said, “Well, I can’t kick him out if he’s named after me.”

When my son began traveling for his work in admissions for the University of Chicago, Emily asked if we could keep Chuck at our house. My late wife Linda was not keen on the idea. In fact she’d long discussed a book she’d like to write titled 1001 Reasons Not To Own A Dog. She’d had family pets as a kid and some of them were rather interesting, to say the least.

Yet the first night Chuck came to stay, he won her heart with an attentive little mind and a propensity to snuggle. Those two built a bond, and Chuck

was there for her through countless days of chemo and surgery recovery as well as bright sunny days sitting together in the garden. Through health and through challenges, Chuck was a stalwart buddy.

I was worried he’d be devastated on her passing. In fact, he did sit at the front window quite a bit wondering when and if she might come home. I kept up our routine of walking him twice a day as I’d done since he came to live with us. My daughter was living at home at that time following graduation from college, and Chuck was an important partner in helping her process grief.

When my son Evan came back home for visits from New York City, Chuck was always ecstatic. Their original bond has never dissipated. That dog is full of love and he shows it, sometimes too much. We’ve never trained him not to jump up when greeting family, friends or strangers. It’s a bit obnoxious, but it only lasts about 30 seconds. His loving character is revealed in a rather enthusiastic way.

With all the comings and goings in our lives these past six years, it has remained my responsibility to walk and feed the dog. There’s a rhythm to all that, and it has helped on many occasions to have to walk the dog when dealing with change or difficulty in life. More than once during my wife’s health challenges there were times when the world could find me bent down and crying at the side of the dog, stroking his fur as he looked at me with his deep, dark eyes. He seemed to understand, and by the time I’d get home the tears would be dried and Chuck would pile back into his couch routine.

My caregiving responsibilities did not end with her passing, however, as my father was still in my care. For thirteen years since he’d had a stroke in 2002, and my mother passed away in 2005 I took care of my father. He died several weeks ago of fairly natural causes. We’re having a Memorial Service in his honor tomorrow. Even he grew to love Chuck, who would hop up into his lap on the wheelchair or beg to be placed on my dad’s lap when he visited in his Volkswagon van.

It strikes me that when Chuck leaves my home there will certainly be a void in my life. Yet the bond would never have taken place had my son not helped save Chuck that night, and Emily had not wanted to bring him home. To me, this next step is a natural extension of both their love and their character.

So sharing the pup is what we do. And it’s time for Emily to have her well-earned time with the dog she so loves. He’ll still come for visits pretty frequently I bet. She’s a busy gal with her boyfriend Kyle, whose dog Dozer is a pit mix with a heart of gold and the voice of a UFC announcer. So Chuck will have some weekend visits now and then, and that will be fun.

First we’ll all be celebrating Thanksgiving as a family. Chuck loves when tons of people come over to visit. I tell him in the morning, “All your people are coming today. Then when the first car pulls up I ask, “Who’s here?” He piles up onto the sofa back to look outside and paw the big window. His nose marks cover the glass in a wide swath. He’ll whimper and whine a bit when he sees who it is. He even recognizes the sound of certain trucks.

On Thanksgiving morning my companion Sue and I will rise early to race in a Turkey Trot. We rise early to do quite a few things actually. This past
summer during training for her Ironman triathlon there were many weekend trips to Wisconsin and early bike rides. Always that means finding someone to look out for Chuck or take care of him overnight. A neighbor across the street can help once in a while, and family members have taken him in when we’re on one of our athletic junkets. But honestly, there might be a touch of relief not having that obligation. It will be the first time since 2000 that I’m not directly responsible for the caregiving of another. I can’t really tell you how that will feel. Good or bad, it is what it is.

As for Chuck, I’m sure I’ll miss his little face and snuggling with him when he climbs under my covers once he eases out of his crate with a long stretch in the morning. Then he takes a couple steps and jumps up onto the bed. That little dog has been a big part of my life for a long time. Longer than the years I spent in college or other ostensibly significant periods of time. Our pets are a big part of our lives. Fortunately Sue has some really great cats that live with her. Fur Friends are important.

Chuck and I have also walked an estimated 1000 miles together over the years. When we get near home I give his leash a nudge and say, “Let’s run!” For fifty or so yards we sprint full tilt toward the house. He has three modes of locomotion. Walk. TripTrot. And bounding run. He’s just a touch faster than me at a full sprint. But I can still motor too. 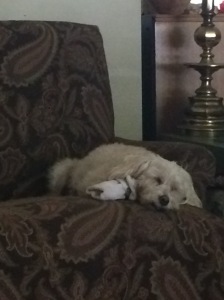 It’s that last bit of speed that I really enjoy seeing in him. He’s still a healthy pup and not too old to really motor. His ears fly back and his paws swing forward and back with speed. We’re flying home and I almost always start laughing and tell him “Good Boy!” when we cut across the yard and head back inside.

Usually, he goes and takes a long drink from the plant watering can. That’s what he prefers over a boring little bowl. Then he often sacks out on a chair or the couch for a good long nap. He loves it if someone sits next to him to quietly scratch his ears or stroke his fur. He also loves his “brush,” and he’ll sit up and look back at you to encourage you to use it if you say the word.

He’s got all kinds of funny little quirks like that. From his crooked smile with a snaggle tooth on one side to the foxlike arc of his face, he’s a

Schnoodle with character, caregiving and community all built into one little dog.

It’s time to Share the Pup however. Which means I’ll engage in my long time practice of petting other people’s dogs. A few weeks back after Run Club in Naperville, it was a nice day outside and that’s what I did. I wandered around downtown after running and did some shopping while stopping to pet the dogs I met along the way. They are all souls like us. Perhaps not gifted with the same brand of intelligence, but they all have their unique and valuable qualities. It’s a nice thing to share in this world.