Weekend bookends for a roadie and triathlete

Posted on June 15, 2015 by Christopher Cudworth

The storms passing through the Midwest and Illinois this year are no more intense than usual, but they are a little more frequent. Last weekend’s duathlon in a downpour was an interesting experience. This weekend’s sweeping series of rainstorms made it difficult at times to even get to the car without getting soaked. 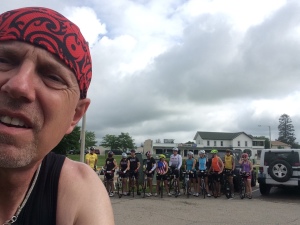 Somehow our group of four roadies got together on Saturday morning to squeeze in a ride of 56 miles. The wind was consistent but not devastating. It seemed to be coming in low from the southeast, which meant that our traditional route to the Northwest side of Kane County and beyond would bring us straight back into the invisible enemy of all cyclists.

The route has other enemies to encounter as well. Namely there are numerous false flats. The glacially flattened landscape of Illinois may not be blessed with striking promontories. But like its politicians the state has a sneaky side. False flats are almost everywhere.

For those unfamiliar with the term “false flat” it describes the circumstance in which the road appears level yet in fact is climbing to some degree. Runners and cyclists get fooled into going harder than they can possibly sustain the entire length of the deceptive climb and can wind up barely moving their legs by the time they reach the top.

Throw a little wind into the mix and false flats can feel like the Devil’s Treadmill. If you’re lucky you can slot in behind fellow riders and catch the draft for a bit while someone up front does the work. If you’re climbing a half-mile hill into the wind and the leader can pull 18 mph your work is not nearly as hard in back.

Until that time when it is your turn to pull. Suddenly you’re engaged in the soul-searching press of keeping that pace or faster without anyone else to break the wind. Glancing ahead you might see a tree beside the road that makes a good “pull target” to which you’ll extend yourself. But you must be careful not to pre-judge your efforts, because sometimes the mind’s eye and the body do not cooperate. It is far better to assume the same pace the group has been maintaining and ride to that point where it starts to strain your legs, then float to the back in a spin.

Still, during the 56 miles we rode on Saturday my body in large part cooperated. The only true moment of weakness came at the end of a series of rising climbs that have always been a challenge for me. Yet I lost only 10 meters on the final climb and then hustled back on the group.

Having ridden with these boys for 10+ years, and having trained in running with them dating back to 1973 when we were in high school, we have some age-0ld expectations among us. Competitive rivalries never really fade. So it was that one of my age-old former teammates offered some criticism about my ability to pull that day. “You seemed to be struggling with a few of those pulls,” he observed. Then he proceeded to dispense advice about how to ride a bit better. I listened politely but impatiently. I’d actually been pulling at a pace everyone was riding when one or the three would charge ahead and ride the same speed. F That, I thought. I no longer care what people expect. I’ll just do my part and leave it at that. You really can’t win at some games.

In sickness and in health

It is true: eventually you do tire to some extent of even your best friends giving you advice. Having come a long way in fitness since the first two spring rides in which I dropped because I was sick all week with a low-grade flu, it was perhaps inevitable that they viewed me in the terms of inferior fitness. Yet the years when I was really fit there was equal complaint about my pushing the pace as lagging behind. You can’t change it. Riding with people is like being married. You take some of the bad with the good.

It’s the challenge of every rider and runner to deal with the new and old forms of judgment. It’s gotten to the point after a decade of riding that I can no longer care what anyone thinks of my riding. I still read tons and study how to climb better or handle false flats. I’ll honestly listen to my friend’s advice because he is a faster and far more experienced cyclist than I’ll ever be. Even at my prime in life I would never have ridden as his equal. He’s got both endurance and speed, whilst my skinny legs might have been good for endurance alone.

So it simply can’t matter how my buddies judge my efforts. We did 56 miles and I finished the ride without holding them back. Did my share of pulls and needed only a short nap to get ready for the BoDean’s concert Saturday night with my buddies and our dates. 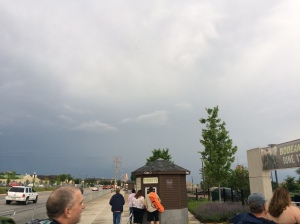 Then it poured. One couple got soaked. Another couple was on their first real date. And Sue and I bailed because we were getting up at five a.m. to travel to Wisconsin and ride the next morning. The roadie side of the weekend bookend was complete. The triathlon bookend was about to begin.

Three decades ago the marketing theme for Badger State tourism was Escape to Wisconsin. It described what thousands of Illinois Flatlanders did every Friday to find fishing, boating, camping and other forms of outdoor fun.

The main escape route from Chicago and vicinity is Interstate 90. But as we drove up I-39 toward Rockford the skies just rained and rained. Fortunately, and thanks to modern technology, we knew the rain was real but temporary. The big blotch of green, yellow and orange indicating rainstorms on the Weather Channel was well south of Madison where we were scheduled to rendezvous with twelve other triathletes for a tour of the Ironman Wisconsin stick and loop. Yes, this is the second time this year we’ve headed up there.

We’re also going back up to Fitchburg for the Horribly Hilly 100 next weekend. So my brain was not entirely reconciled to this fact as we piled through the rain and wind in Illinois. But when the weather cleared around Janesville so did my head. We stopped for a pee at the Wisconsin line and the sight of the bikes on my roof rack lifted my spirits. 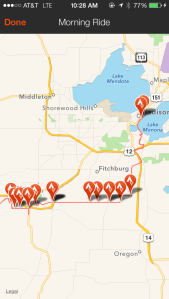 We rallied the group of 14 triathletes in Verona and set off eastward for downtown Madison. The “stick” is the L-shaped sections of road that lead from the shore of Lake Monona where Ironman Wisconsin starts. We rode the 17-mile segment in reverse, took a break out of the burgeoning sun inside the parking garage and headed back west to get in the mileage and practice the route for the six or so Experience Triathlon athletes competing this year in Wisconsin.

My concerns about how I’d feel after the previous day’s 56 miles were dismissed early. The legs actually felt good after warmup as we piled along the rolling roads and back out. My plan was originally to ride just the 34 miles roundtrip and settle in to do some writing at the coffee house.

It felt too good to be riding so I joined the group on the initial miles of the 40-mile loop that Ironman athletes ride twice in the 112 miles of the race. The group was headed out for the Loop that takes about 2:20 on a decent day. This time around with the group it felt much more natural than in the past. I’m one of only two riders in the group with a road bike. The rest of them have Shivs and massive yet let tri-bikes with aero bars and that clunky whirring speed that comes from them. I have often felt like a roadie sheep among triathlete wolves some days. But I ride in the drops whenever possible and that helps. Some. 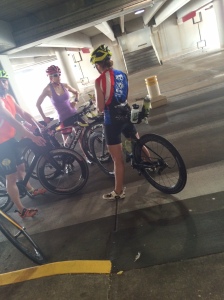 We got about six miles out on the Loop and I turned around not really wanting to stretch my luck on the bookend of the previous days’ 56-mile ride. There was a hint of real fatigue in my legs by then. I was still climbing well with no delays or bonks. But the false flat ridden into the wind on the trip to Mt. Horeb told me that things were wearing from the inside out. There was a Sag Wagon if I wanted it but my vision of getting back to write and relax was inviting. So I happily pedaled back toward Verona with the idea to get at least 16 more miles to complete a 50-miler on Sunday for a Century Weekend.

Lucky enough that I did so. Because as I entered Verona my rear tire started to feel soft. Somewhere along the way I’d hit a stone or pinched the tube and a slow leak was finally taking effect. I turned a corner and the tire wobbled underneath me. Still, I rode the remainder by winding around the streets of Verona and finished with 49.8 for the day. Good enough. Still, one of the triathletes asked me the question I half expected all along. “When did you bail?”

The simple answer is, I didn’t. There’s this universal rule that all in training must obey. Do your own workout, and what’s right for you. I’m not training for an Ironman. 106 miles for the weekend plus a brick was satisfying to me. Ride on. Run on. My results in the last two duathlons tell me that I’m doing some things right for my goals.

The weekend bookends for a roadie and triathlete work out okay if you cease worrying about whether you’re one or the other, or what anyone thinks of your efforts.

2 Responses to Weekend bookends for a roadie and triathlete