Posted on July 30, 2014 by Christopher Cudworth 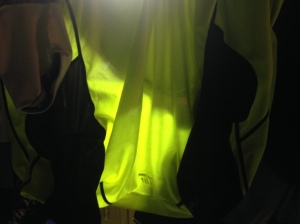 Summer 2014 is officially just over one month old. Whatever you want to call it; meteorological summer or whatever, the season officially starts June 21 and ends September 20 or so.

I know, I know. For those of us in the Northern Hemisphere, the start of August feels like the beginning of the end of summer. But unless you ignore the principle of basic fractions, you’re very wrong. We’re 1/3 of the way through summer and none of your negative shit about the end of summer can change that.

Of course we’re all programmed to think Back to School when August rolls around. If you’re a mom or dad with kids between the ages of 5 and 20, that’s probably true. There’s elementary school and middle school and high school and college to consider. In that sense, summer technically ends when the kids go back to school. So be it.

But for the rest of us, and that means millions and millions of people who no longer attend school, but who work and want to enjoy the warmest months of the year for what they are––summer––there’s no reason to depend on that psychology at all. 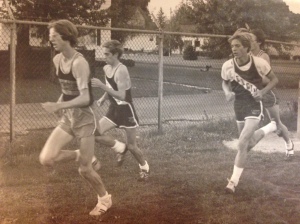 I’ll admit one thing: As a runner August has always meant the start of real training for the fall season. High school cross country season began sometime in the middle of August with two-a-day workouts. That was hard, hot, sweaty stuff.

Same with college. We gathered before the fall semester on campus or took training trips out West to get in shape for the cross country season. August meant it was time to buy new training shoes and increase the mileage.

I’m not falling for that Summer Is Almost Over crap this year. I love August. I have always loved August. I love training through the August heat when you sweat so hard your clothes almost peel off. I love riding on calm mornings because August is one of the least windy months I know. I love stripping off clothes after a hard workout and lying on the bed to let the warm air coast over your body. I love the smell of August flowers wafting in the bedroom window, and the sound of a patient sprinkler keeping plants alive outside.

When summer storms do blow in I love the scent of rain on the otherwise dry air. I love when the green leaves turn white and flutter in the force of an oncoming storm. I even like getting caught in the rain on my bike or while running. 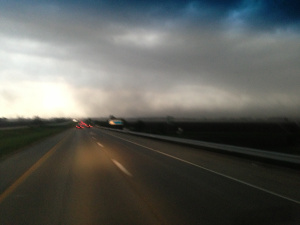 Once while running in a remote forest preserve a rainstorm came tearing up from the west and I got soaked to the skin. It rained hard at first and then settled into a steady August drizzle. All was quiet and wet. The earth seemed to be reaching for the sky. All was magnified and illuminated. I stripped off my clothes and my shoes and ran naked for two miles on lonely trails far from civilization. Talk about getting back in touch with the earth, and who you are, and why you run. It was elemental. You should try it sometime. Minimalism isn’t just limited to no shoes. No clothes feels just as good.

Or find a beach. Hide out somewhere and let August soak into your skin. Or September for that matter.

The summer racing season extends into September after all. Triathletes peak for events when the water isn’t so freezing and the winds are not knocking you off the bike.

Road racing in late summer as a runner is an absolute joy as well. All that summer fitness adds up to great feelings if you plan it right.

Cyclists indulge in one last burst of big riding and racing in August and September. In our area there is a series of events over consecutive September weekends. Riders squeeze out criteriums and road races and time trials before accepting that waning summer light means less training time in the evenings. Then the cyclocross bikes come out.

So there’s no real reason to give up so soon on summer. You wouldn’t run through two miles of a 10K and say “Well, this race is almost 1/3 done. I might as well coast in from here.”

Of course you wouldn’t. So don’t fritter away the rest of summer. Dig into it with gusto.

And if you live on the other side of the world in a place like Australia where the winter months are now in full swing, think ahead to your next summer and plan to make the most of it.

Christopher Cudworth is a content producer, writer and blogger with more than 25 years’ experience in B2B and B2C marketing, journalism, public relations and social media. Connect with Christopher on Twitter: @genesisfix07 and blogs at werunandride.com, therightkindofpride.com and genesisfix.wordpress.com Online portfolio: http://www.behance.net/christophercudworth
View all posts by Christopher Cudworth →
This entry was posted in Christopher Cudworth, We Run and Ride Every Day and tagged August, back to school, cross country, making the most of summer, road racing, summer is almost over, summer training. Bookmark the permalink.

3 Responses to Summer’s just getting started