Posted on August 21, 2013 by Christopher Cudworth 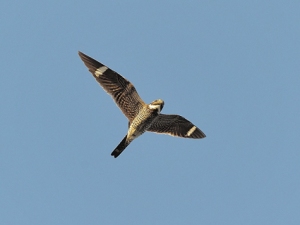 There really is a bird called a nighthawk. They are in the same family of birds as whip-poor-wills, marked with exceptionally cryptic coloration so that when they sit still on a branch or on the ground, you can hardly see them.

But when nighthawks fly overhead, you can hardly miss them. On summer evenings before dusk they appear over the treetops, flapping with a distinctively rapid beat of the wings, and calling loudly with a hoarse “peeennt.”

In our area of Illinois nighthawks were once common on summer nights. While out running through the neighborhoods near home you’d hear them calling well into the night, flying through the yellow glow of streetlights where moths and insects fluttered about.

As the nighthawk goes, so go I

My high school and college runs are almost inseparably linked to the sounds of nighthawks. It would be hot all day, even oppressively so, and running at night was the only thing that made sense. Coming home from some crummy summer job meant collapsing on the couch for an hour or two and avoiding dinner so that you could get out and run 6-8 miles, building a summer base for the fall cross country or road racing season. Always the nighthawks were there, buzzing amicably as they flew.

But no more. There are hardly any nighthawks left anymore in Illinois or other parts of the country. They’ve disappeared.

Changes in industrial and office building construction may be responsible for the loss of breeding nighthawk populations in Illinois. Formerly the flat roofs of factories were coated with tar and covered with pebbles. That was a perfect environment for nighthawks to breed. No one bothered them up there, and their eggs were well camouflaged against the pebbles. It may be that new construction techniques, especially roofs no longer covered with gravel, are changing the breeding dynamics of nighthawks for the worse.

Or, there may be something even worse taking place. A National Wildlife Federation article published in 2009 notes that insect-eating birds of many types, but especially those that fly through the air to feed, are on a sharp decline in population terms.

It can’t be said that scientists know exactly why. Birds like swallows, swifts, martins and flycatchers are also showing population declines.

All these species that rely on flying insects for food are disappearing. Some scientists are studying whether climate change could be causing drops in critical food supplies. Breeding cycles of insects are closely timed with temperature changes and annual climate cycles. If something gets mixed up in those climate signals, bugs may not be successful breeders, and that impacts the birds.

Birds are what they eat

We don’t even have that accurate a view of what these birds eat on a daily basis. For example, it was long proposed that purple martins eat mosquitoes. Yet it turns out that a significant portion of their diet comes from much larger insects, especially big, fat dragonflies. But if communities spray local wetlands for mosquitoes, there may be enough impact on the mosquitoes that birds do eat to either cause interruption in feeding patterns or pass along the insecticides through the food chain.

It has been irrevocably demonstrated in species like bald eagles and peregrine falcons that birds at the top of the food chain can accumulate radical levels of deadly insecticides in their bodies. That can ruin the solidity of eggshells and cause nesting failure. With enough concentration, insecticides can easily kill a bird outright, as was the case when flocks of red-winged blackbirds literally fell from the skies in recent years. Agricultural administrators admit the birds were poisoned on purpose. 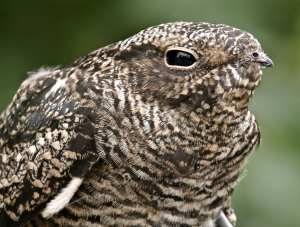 So the truth about nighthawks and why they are actually absent from the skies is not well known. Our lawns and crops are laced with herbicides and pesticides routinely distributed, often without clear regulation on safe doses for the environment. Those chemicals leach into the ground and indiscriminately kill so-called “good insects” as well as bad. Our obsession with creating a so-called prettier environment, devoid of weeds and biting insects, may be killing us all. That’s a tarsnake of environmental irony. We love recreating our world in our own image, do we not? Some people thinks the Bible itself tells us to do so. Call some place Paradise, kiss it goodbye…

For years my wife “ranched” monarch butterflies, plucking tiny eggs off the leaves of milkweeds in our yard to give them a head start munching on leaves inside an aquarium. The caterpillars would eat their way into larval fatness and then form their chrysalis and hatch 10-12 days later.

Most summers there would be monarchs fluttering about our garden, but in the last 5 years the population that migrated through our area entirely disappeared. I have seen exactly one monarch on our milkweed this summer. The tattered, pale insect fluttered about but did not engage in any egg laying. The monarchs are gone.

Giant chemical companies keep insisting their products are safe for the environment and in some cases, even good for our health.

The absence of monarchs from the garden and nighthawks from the skies may be telling an entirely different story. We know empirically that insecticides kill insects. That’s why they were designed. And by proxy, insecticides also can kill or harm other species of animals, including human beings. The incidence of cancer and autism and many other seemingly silent but deadly effects on human beings continues to grow. Do we have the will to ask the hard questions and demand answers from companies like Monsanto and others who appear to be willing and determined to put profit before human health at any cost?

Sometimes even the empirical evidence we have is not enough to bring about change. Too many people know too little about the environment to understand what it means to ‘lose’ a species like nighthawks from the skies. And then there are the legal protective forces that lawyer up whenever the credibility of their brand and reputation is challenged. It will not surprise me one bit to hear from a Monsanto lawyer about this article. It’s happened before. They’re like a giant fungus, with feelers everywhere. So how do we protect ourselves from them? That is the anxiety of the modern age. And every age.

We all know the tenuousness of life can be a strain for us all. Take, for example, the painting “Nighthawks” by Edward Hopper. The wan light of the diner casts a harsh pall on the people inside. Life itself seems washed out. The diners have so little warmth between them. You can imagine the lack of conversation, or hushed tones. The clink of dishes and a patent sigh from the fellow finishing his coffee before he gets up to walk outside.

And though this painting is set in a different time, before the era when runners and cyclists occupied the streets in numbers significant enough to recognize, one can still imagine that short shock of disturbance when one of the patrons heads out the door and nearly gets knocked down by a runner coursing down the sidewalk on a near-midnight run.

Above the city a plaintive call can be heard. The sound of a lone nighthawk going about its business of eating on the fly. We are all nighthawks, it seems. On the run from things we cannot see, can hardly know, and wondering what it all means in the end.