Who owns the road where you run or ride?

Posted on February 7, 2013 by Christopher Cudworth 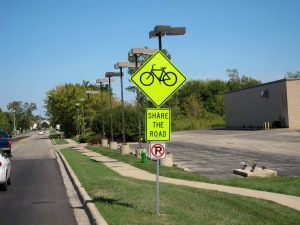 One can only hope drivers take the sign literally

The motorist leaned out the window of his vehicle yelling, “Get the f*** off the road. I pay taxes to drive here.”

As if the rest of us don’t?

Of course, the reason people pay taxes to drive on public roads is to cover the costs of construction, upkeep and repair of those roads. And what really causes the need for all that repair and upkeep? You guessed it; cars, trucks and other vehicles. Vehicles wear out our roads.

Lightweights who ride and run

Bicycles? Not so much. You’d have to be a pretty heavy cyclist to cause a dent in the road. It’s unlikely you could even ride a bike if you were actually heavy enough to cause an indentation on asphalt with your bike. Your bike tires could not handle. You’d get a pinch flat just sitting on the seat.

For runners, it’s the same thing. Runners don’t wear out the roads. In most cases, roads wear out the runners. The camber on many roads can cause overuse injuries if you’re not careful. Our shoes wear down from  abrasion. Our minds wear out from those white lines stretching miles ahead…

Drivers who think they “own” the road

Yet there seems to be an attitude out there among some motorists that they literally “own” the road, and that cyclists and runners are an intrusion on that right. It’s as if many motorists think that runners and riders are actually trespassing on their property–their personal property.

We should repeat that for clarity and emphasis: Some motorists think they literally own the road, and behave like it too.

That’s why some motorists do not give people who run and ride the 3 feet of passage space required by law. It’s not much to ask, yet it seems impossible for some drivers to grasp. Just pull around a cyclist or a runner, or a group of cyclists or a group of runners.

But when you think you own the road, you assume that you should not have to pull around anyone, or separate hazards so that you avoid meeting a cyclist or runner at the same point as an approaching car. Those are basic driving skills, yet many people seem to have forgotten these skills, or are too lazy to care, or too stubborn to recognize  their obligation to obey the law. When traffic conditions occur in which drivers are required to separate hazards, they simply don’t. They barrel through the situation passing perilously close to those who run or ride. And sometimes laugh about it. We’ve all seen them do it. The tip of the head and the flip of the bird.

Even if drivers did technically “own the road,” which is questionable considering that everyone in a county, state of nation pays some form of tax to build highways and streets, there is no conferred status rendered through such tax payments. It only means the roads exist for the purpose of public use. No one person “owns” the roads in any real aspect related to possession, other than you accept the role of citizenship with access to the commonwealth of a nation.

If people who think they “own” the road were correct, our laws would have to make some provision for a “traveling” form of ownership in which drivers were deemed to be driving in some sort of “ownership bubble” surrounding their vehicle, so that at any given time, that “right to the road” would move along with them.

The idea of ownership “moving down the highway” with a particularly designated vehicle would make laws impossible to enforce and insurance equally impossible to distribute. A motorist could otherwise argue that another driver somehow impinged on his or her personal property, their private space on the road, as it were, mobile though it may be.

So the idea that some guy or gal in a car is driving down the road in their vehicle and getting angry at a cyclist or runner who is using “their part of the road” is absurd. By contrast, public law confers genuine rights on the runner or rider using those roads. The signs that say “Share the Road” along the highway stipulate that cars, cyclist and runners have shared rights and equal access to the roadways. Having a car or a driver’s license does not give anyone “special rights” to use public roads. In fact it rather limits those rights to be a licensed driver carrying insurance and paying attention to driving laws that include stopping at stoplights when they are red, obeying speed limits and giving right of way to certain forms of traffic in particular circumstance.

Farm machinery is a good example. Many farm implements depend on roads to navigate from field to field. Most tractors top out at 30-40 mph and combines go even slower. Cars must separate hazards to pass such vehicles.

In the city emergency vehicles such as street cleaners, postal trucks, garbage trucks and ambulances all require other motorists to slow in their presence or accommodate their pace.

Similarly, pedestrians legally deserve the right of way on public highways, and cyclists deserve the same respect. It is often debated that many bike riders do not obey the law when it comes to stop signs and other traffic situations. But bikes are generally not capable of exceeding the speed limit and causing damage to other motorists even at high speed. They can hurt a pedestrian if they are going fast enough, but the rate of those kind of accidents is nearly minimal.

So the idea of “owning” the roads is a question of ethical behavior, and relative power. A car can easily kill a bicyclist or runner, while a biker or runner are not likely to run into a car and knock them off the road. So the law says “Share the Road” with the idea that ownership of the road itself is always mutual, whiles use of that road is discretionary. The obligation among those most empowered, as in driving vehicles versus running or riding, is to err on the side of caution and safety.

Separate hazards. Share the Road. It’s the thought that counts.

Some people don’t like to think when they drive. They just want to barrel along like they own the road. Look out for them. Their manner of transportation is one of greedy self occupation. You need to understand that mindset if you are going to protect yourself from harm while running or riding. Understand that not everyone thinks like you do about the world, or the road you are using. They literally think they own the road, and you are on their property, and in their way.

Look out for them while you run or ride.

1 Response to Who owns the road where you run or ride?