Posted on February 15, 2018 by Christopher Cudworth 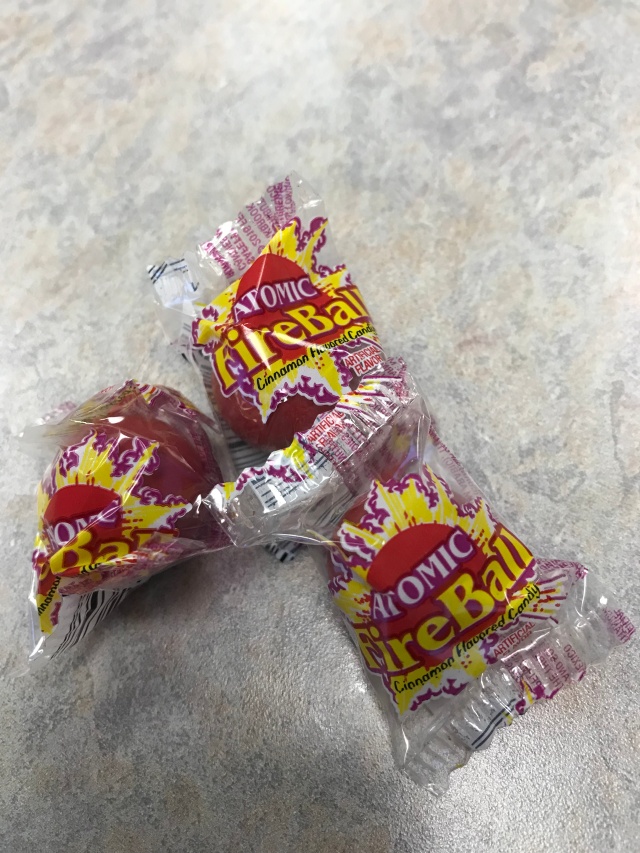 In the never-ending battle to tame my gut at both the appetite and girth level, I’ve lately engaged in a test on the ingestion front. Thanks to my brother-in-law Paul, who likes what he likes and that’s that, I am now a consistent consumer of Atomic FireBalls.

You probably know that candy. They are coated with some fiery hot substance on the exterior, and from there on in they’re basically a chunk of really hard sugar. And that is why they’ll have to go.

It’s too bad. My little experiment in combatting flavor boredom has been rather fun. Sucking on a red-hot cinnamon FireBall really takes your mind off being hungry. Cinnamon is a highly distracting flavor in general. It’s like the horseradish of candy store fare.

I used to keep my church offering to buy really hot cinnamon candies at the People’s Drug Store in Lancaster, Pennsylvania. There would always be a rush of guilt turning over the quarters I was supposed to give to God to buy cinnamon redhots at the drug store. But that first burst of hot cinnamon washed away guilt as fast as the company of that porn star hired by Donald Trump to take his mind off being married yet again. It’s true that Trump’s attorney paid the girl out of his own pocket, but that’s a joke unto itself. Literal or metaphorical?

So I’m not bragging about my current little sinful habit of eating FireBalls. I know it is a temporary solution. I also own a Fireball Rum tee-shirt. It’s rather adult in its context but also rather childish in its taste. You’re only young once but you can be immature forever.

So I not defending my youthful propensity for trading offerings to God for cinnamon. I still think that was a fair trade. Perhaps it is no coincidence that those cinnamon candies were hot as hell. Satan travels many paths to invite us to eternal damnation.

Which is why I’ll be seeking other alternatives to blank out the cravings of my hungry gut through dissociative snacking. For a week or so I dined on chipotle or honey-roasted  sunflower seeds. They only have 2gm of sugar, 120 mg of sodium and total carbs of 7g per serving. That was all good. But they turned my crap into a constant commitment of unmanageable levels of gruel. I was way tooo regular.

So I’ve enjoyed my little FireBall Rally as a respite from reality. It’s time to move on to something less sugary again. Perhaps I’ll just buy one of those rawhide things from Pet Supplies Plus, and gnaw on that through the mid-morning hours.

And if that doesn’t work, I’ll just pay the devil straight up like I almost did when I was a little kid. It seems to work for Trump. Why not me?

Christopher Cudworth is a content producer, writer and blogger with more than 25 years’ experience in B2B and B2C marketing, journalism, public relations and social media. Connect with Christopher on Twitter: @genesisfix07 and blogs at werunandride.com, therightkindofpride.com and genesisfix.wordpress.com Online portfolio: http://www.behance.net/christophercudworth
View all posts by Christopher Cudworth →
This entry was posted in healthy aging, healthy senior and tagged diet, exercise, fireballs, healthy snacking. Bookmark the permalink.