Virgin Territory a tale of determination

Posted on October 12, 2017 by Christopher Cudworth

The book Virgin Territory is the new biography of American distance runner Craig Virgin. The book was authored by longtime sportswriter Randy Sharer and is available on Itascabooks.com , at Amazon.com or on Nook Book,

A successful sports biography does several things. First, it gives the reader an honest assessment of the personality and performance of the person in question. Second, it compels the reader to consider the challenges that made the subject of the book unique. And third, it makes you want to turn the page and find out what happens next.

By all these criteria, the book Virgin Territory authored by Randy Sharer is a successful biography of the American distance runner Craig Virgin. The author spent more than six years researching the life of his subject. The two would spend hours on the phone discussing periods of the runner’s career and business venture.

A document of determination

If that seems a laborious way to create a book that covers 300 pages, then credit both Sharer and Virgin with the patience and determination to do it. And that happens to be the focus of the book as well. Sharer captures the source and path of Virgin’s determination, charting his life as a youthful farm kid in Lebanon, Illinois, where childhood struggles included malfunctioning kidneys, giant catheters shoved up his urethra and the ongoing pain and illness that plagued the boy

But these hardships never quelled his inner spirit. “Had I not gone through that experience in my youth with infections and having to learn to monitor my body,” Virgin said, “and then having to learn to disassociate from the pain of medical procedures or the pain when I got really infected, would I have acquired the skills to run through the pain that I did later on in my athletic career? I don’t know.”

Questions and insight of that nature fill the entire book. Virgin was a self-aware athlete from the beginning.  Even when kudos piled up for his exploits in high school and satisfaction with his accomplishments could have taken over, he set his eyes on achievements beyond what most Illinois farm kids could ever imagine. 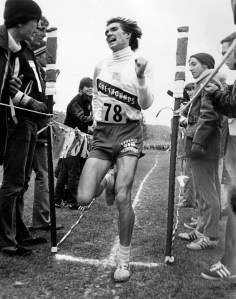 But that’s the point of Virgin Territory as well. While self-aware, Craig could not always prepare himself perfectly for the situations he faced as he raced past records set by America’s most famous prodigy, Steve Prefontaine.  Yet Virgin wasted no time in pursuit of running success across a spectrum of endeavors. He excelled in running disciplines including cross country, track, the roads and ultimately, the marathon. He placed second at Boston in a time just over 2:10. That still stands as one of the fastest marathon debuts among male American distance runners.

Virgin freely admits that his sometimes scattershot approach might not have been the most efficient or effective path to an international running career. He freely admits in the book that he might have done some things differently. Yet he was an athlete trying to peer into the future in many areas. His experiments in converting successful running into business success were groundbreaking and opened doors for many athletes to follow.

One lap at a time

But the painful truth of Virgin Territory is that the life of a distance runner must be lived one lap at a time. The last great race does not count for scratch the next time an athlete steps up to the starting line. “My major problem,” he admits in a section of the book that covers one of his peak periods of racing, “seems to be that I’m just not willing to compete when the going gets tough over the last 800 meters. No amount of training can help. I just have to be committed to racing over the last fourth of the race and not just the first three-fourths of the race. I just don’t compete hard. This is a problem that only I can face out and conquer. No coach, friend or family can do it for me.”

There is not a distance runner on this earth that has not confronted those thoughts. But the same sort of fears vex people in matters of business, faith and relationships. Can you carry it through to the finish. Get the job done. Ask forgiveness. Show love. And do it all with determination and commitment.

Virgin Territory covers the sweet yet often painful transformation of Craig Virgin from small-town superstar to a national and international champion. During a successful career at the University of Illinois, he won multiple Big Ten Championships and earned national titles in cross country and distance events while leading Illinois teams to greater success.

This experience he quickly leveraged into a post-collegiate competitive career thick with racing at home and overseas. Virgin made progress in fits and starts, including training, sponsorship and coaching with semi-professional programs such as Athletics West, a Nike-funded project. Yet many of Virgin’s greatest accomplishments came while following his own training plans.

This was where real determination came in. Virgin almost gave himself no opportunities to second-guess himself. Even during periods when he planned to take a rest, Craig frequently accepted invitations to race in everything from local 5-milers to sponsored races that helped pay the bills. As his professional commitments increased and he earned a management contract with a sports marketing agency, Virgin’s ‘down-time’ fell away. He flirted with burnout and suffered the classic signs of too much training and racing as he came down with colds or injuries related to stress and fatigue. This is a key lesson for any prospective or practicing athlete reading the book. Recovery is as important as hard effort.

Virgin Territory shows how hard it was for Virgin to turn down an athletic challenge or promotional opportunity. The market for paid opportunities was not yet mature. Between sponsorship from adidas and racing for bucks at road races, Virgin’s revenue reached $120,000, a keen salary in the early 1980s.

But Virgin’s promotional bent had a relational cost as well. At some points in his career, his raw competitiveness perhaps rubbed his teammates or competitors the wrong way. But Craig Virgin was uncompromising in his ability to try his hardest at all costs.

Some of the world’s leading runners recognized the difficulty of what Virgin was achieving. Running legend Bill Rodgers noted that a World Cross County title “is worth Olympic gold medal status in my mind, but unfortunately, it’s not known in America.”

That simple statement almost captures the entire career of Craig Virgin. Consider that his greatest chance for an Olympic medal in the 10,000 meters was crushed by the 1980 boycott in which the United States stayed home in protest of the Soviet occupation of Afghanistan. Thus it is no small irony that 37 years later, it is the United States entrenched in that same country.

That bitter truth proves that politicians, in general, have a poor appreciation of what athletes actually sacrifice for a chance to ply their skills and training. The end result is not about national politics at all. For proof, even the performance of Jesse Owens in the 1936 Germany Olympics did not dissuade Adolf Hitler from launching the Second World War. But had Owens been denied an opportunity to compete, the world would have been denied an inspiring example of determination and hope.

Even without an Olympic medal to his name, the story of Craig Virgin’s transcendence shows his Olympic mettle. Thus Virgin Territory is an inspiring read even for people that have never run a step. Author Randy Sharer painstakingly documents both the triumphs and failures, because one does not seem real without the other.

But it was a long series phone calls between athlete and author over the years that brought the book to life. Virgin recalled: “We’d talk by cell phone as I was driving around the country, and Randy would read aloud sections of the book and we’d talk about parts of my career. Then I’d share what was going on in my head and my life at the time. I really give him credit for his dedication in all that.”

The statistics of Virgin’s career don’t lie. The back of the book contains a spreadsheet showing a record of all the races the athlete ran in his career. “Probably I could have raced a little less,” Virgin shared in talking about his career. “But we all did that back then. We raced hard and trained hard. Probably that’s what cost me from the age of twenty-six through thirty when other runners had their best years. I faced a lot of injuries, or got sick from overtraining, and that held me back. By the end, there were still some good races in there, but my body just could not take it anymore.”

Virgin Territory documents some difficult events that came soon after Virgin’s athletic career was over. Some of it wasn’t pretty. But yet again, Craig Virgin fought through the challenge of a overcoming the effects of a life-threatening incident as if he were gutting it out in a long, hard race.

Perhaps if that incident had resulted in his death as happened with Steve Prefontaine, Craig Virgin might be regarded in mythic terms as well. As it happens, his accomplishments have resulted in honor and kudos later in his life. Recently Virgin was installed at the University of Illinois Athletic Hall of Fame along with the likes of Red Grange.

The height of that honor truly illustrates the regard that many have for this small-town athlete who went on to world-class performances in every running discipline. Significantly, Virgin’s record on the Detweiler Park Illinois State Cross Country course outside Peoria, Illinois, has yet to be broken nearly 50 years after it was set.

“If that record reaches fifty,” Virgin laughed in considering that notion. “I’m going to rent a party room and a big keg of beer. I never expected it to last that long, and it may go this year. If it does, I’ll be happy for whatever runner does it. Records are made to be broken.”

The book Virgin Territory was a labor of love for both the author Randy Sharer and its subject, Craig Virgin. It took tons of determination to bring the book to market in an age when getting a book published is akin to winning a national championship. But Sharer and Virgin teamed up and did a good job. And most significantly, they did it their way.

By Christopher Cudworth, We Run and Ride. 2017.