Posted on August 29, 2017 by Christopher Cudworth 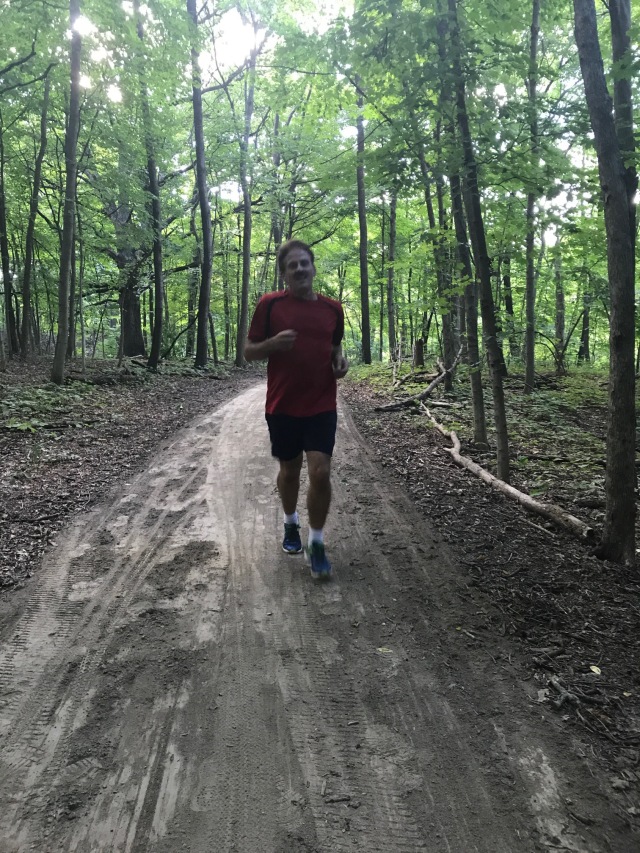 Glenn Lyle was what he characterizes as “a decent runner” in the years just before Frank Shorter’s won the 1972 Olympic marathon and set off the first running boom. Lyle graduated from the Elgin High School cross country and track program and went on to run for Eastern Illinois University. There he ran the equivalent of a sub-31:25 10 kilometer race on the track. By any empiric measure, that is certainly a “decent runner.”

Lyle still runs these days, but his running career went on hiatus for a while after those hard years racing and training on the roads of Illinois. “I went to well over 600 races,” he recalls. “And I always took this cheap little camera with me.”

He built up a considerable library of photos from those journeys all across the Midwest. With friends in tow, he often made trips to famous races such as the Paavo Nurmi Marathon in Hurley, Wisconsin. That’s where fellow Eastern Illinois alums such as Joe Sheeran made names for themselves finishing in the top tier of the classically competitive road race circuit of the 1970s and 80s.

Glenn Lyle also collected and kept a deep catalog of news clippings and race results from high school and college running, and beyond. “All this stuff was stored for years at my mom’s house,” he recalls. “So I gathered it all and started posting on Facebook. At first, I invited my running friends from that time and some others I knew of, and they invited others. But there were less than 100 people in the group after 4 years. Then I encouraged Jeff Wagner, a guy that I knew from EIU, to get back on Facebook. I didn’t realize how connected he was in the running community. Jeff started inviting his friends and they invited their friends. That’s when things started to take off. The group tripled in size in just 3 or 4 months. Now we have a lot of people sharing their stuff.”

“For those who ran in the Chicago area and beyond in the 60’s, 70s, and later you might feel that in some ways they were the “Golden Years” of U.S. distance running (thanks Mark Kimmet). We went from a time when only competitive runners entered track meets, XC meets, and road races and into the running boom where races were also filled with fun runners. I’d like to share a few photos, clippings, etc. that I have from that era. I’d also like to invite everyone else to share whatever you wish!”

Since it took off, the “membership” on Glenn’s Page has become a Who’s Who of Illinois and Midwest running. Most come from the highly competitive era ranging from 1970 through the mid-1980s. Almost all were exceptional runners in their era who ran for cross country and track powerhouses such as Bloom, Willowbrook, York, Proviso West, and schools in the Northwest suburbs.

Some were state champions.  These include Steve Schellenberger, a half-miler in the 1:49 range who went on to compete for the University of Illinois. Others such as Jim Macnider made their names post-collegiately racing in the Olympic Trials marathon before going on to coach high school teams. Now women runners are signing up as well. Many ran in the era long before women dominated numbers of running participants.

So the wealth of knowledge about running among Glenn’s fans is deep, but the memories may run even deeper. Every day, “new/old” photographs and news stories about ‘runners of a certain age’ show up on Glenn’s page. Images range from obscure road races to competition photos of college dual meets produce quick identifications by members of the group. Sometimes the IDs occur simply by the merest glimpse of a particular set of socks worn by a runner, or a favorite singlet. It shows that competition often makes strong impressions on participants. 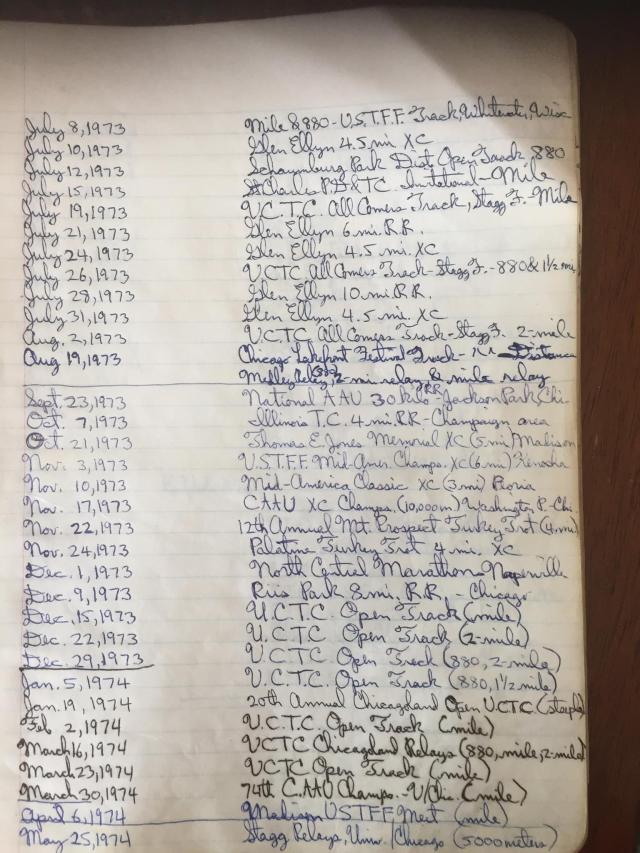 Glenn laughs a bit at his own longtime penchant for detail. “I kept a journal of every race I did. So when people want to know what happened, I often have it written down. I was a little obsessive. I didn’t think it would take off quite like this. I wasn’t sure anyone cared about this stuff but me.”

But people do. Some of the memories seem quite specific, yet each carries a bit of symbolism. A runner named Pat Savage wrote about a quick conversation he’d stumbled upon with Carey Pinkowski, the standout runner and longtime director of the Chicago Marathon. “Out walking this early evening (when) I ran into Carey Pinkowski who verified the earlier story about Dan Candiano arguing with the Bloom coach after Rudy Chapa was disqualified in the mile relay for wearing a different color pair of shorts than the rest of the team. It almost came to blows. Carey also said that at that same meet, two of his team mates broke 9 minutes in the 2 mile. He won the MVP for winning the 880 and the mile. Should have been the two that broke 9 minutes was Carey’s response.”

That’s the kind of anecdote that serves as something of a parable among distance runners who know what quality running is all about. So it is no surprise that a runner like Pinkowski has gone on to direct one of the world’s premier marathons and a race that attracts some of the world’s finest distance running athletes.

Most of the conversation is more down to earth, including memories of what it was like to race back in the day when events and housing were much more simple. Glenn Lyle shared this experience of traveling to the Paavo Nurmi Marathon in Hurley:

“We noticed a sign about housing info for runners so we went to see if we could get some. To our great fortune we were matched up with the Lanttas, a Finnish family that lived a little out of town on a very rustic little farm. They had 2 goats, chickens, turkeys, ducks, a goose, 3 horses, cows, cats, & dogs. I have a great memory. No, my running diary does, though. 🙂 When we arrived the goats ran over to see us & the turkeys followed. The Lantta family was very friendly & hospitable! We went for a run and later they family served us spaghetti and milk from their cow.”

The Paavo Nurmi Marathon is now in its 49th year of existence. But marathons were relatively rare races back in the 1970s and 80s. Distance runners were far more likely to race shorter distances, and much more frequently. Some raced twice a weekend, running a 5K on a Saturday and a 10K on a Sunday.

All that Glenn Lyle hopes to achieve with his closed group called Glenn’s is to have a good time sharing his deep stock of memorabilia and see samples of what others have kept and are willing to share in the digital age.

It is truly a labor of love, and when Lyle goes out to run these days, his memory bank is filled with even more examples of why the sport of running was so unique in its early growth years. Some of the runners in Glenn’s lament the lack of relative quality found in contemporary road races. More than one runner has noted that the fields back then were much faster and much deeper than the typical distance race results from today.

One four-mile result from a Glen Ellyn 4-Mile cross country race in July of 1973 showed 11 runners finishing under 21:00, with several including world class miler Ken Popejoy finishing under 20:00, faster than 5:00 per mile.

Yet there is no real bitterness, only appreciation for how serious the distance world took their results back then. But that doesn’t mean the distance world is any worse now. “It’s just different,” Glenn Lyle observes. “And I’m kind of grateful cause now I can go to a race and have someone to run against even in my old age.”

So the labor of love continues, and the little site known as Glenn’s continues to grow. Recently a former world record holder named Henry Rono requested to join the group. “I don’t know why,” Glenn admitted. “We’re kind of limited to the Illinois region and I want to keep it that way. But it’s interesting that a guy that set records from 3000 to 10,000 meters might be interested in other runners like us.”

The yellowed clippings. The faded photographs. The short shorts and sometimes tall socks. The classic footwear and all the trappings of 70s and 80s hair and glasses. All combine to bring back moments in time. For now, we’ll call it Glenn’s, the guy who cared enough to bring it all back into focus.

4 Responses to Glenn’s labor of love