Transcending the vicissitudes of life

Posted on August 4, 2017 by Christopher Cudworth

Up until The White Album, the Beatles were a fairly unified bunch of music makers. They’d ascended to Fab Four status, toured to screaming fans, taken America by storm and were starting to feel fed up with it all. 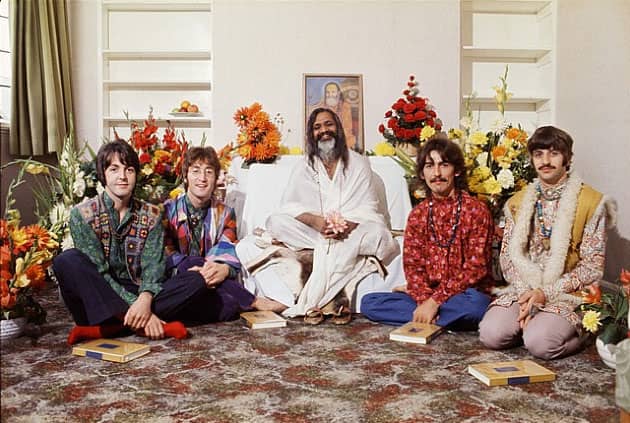 They gathered up their stuff and headed to India to study with Maharishi Yogi, because the Beatles were simultaneously stressed out by all the fame and always up for new experiences. The Boys had all been doing a fair amount of drugs, but it didn’t help them find the meaning they were seeking. So they went looking in other places.

We’d seen Maharishi up north when we were kids. He was on the telly every few years on Granada’s People And Places programme, the local current affairs show. We’d all say, ‘Hey, did you see that crazy guy last night?’ So we knew all about him: he was the giggly little guy going round the globe seven times to heal the world.

Paul McCartney
Anthology
The Beatles first went to hear the Maharishi speak in London. Here’s how George Harrison described it:

I got the tickets. I was actually after a mantra. I had got to the point where I thought I would like to meditate; I’d read about it and I knew I needed a mantra – a password to get through to the other world. And, as we always seemed to do everything together, John and Paul came with me.

George Harrison
Anthology
And this is what Ringo said:

I think he realised that these boys could get his message across real fast. And so after we met him, he brought up the idea of us going on tour again and opening up a place in every city. But we didn’t do that, because things began to change.

Ringo Starr
Anthology
While studying in India, news came over that their longtime manager Brian Epstein had died back in Great Britain.

We loved him and he was one of us. Maharishi’s meditation gives you confidence enough to withstand something like this, even after the short amount we’ve had.We all feel it, but these talks on Transcendental Meditation have helped us to stand up to it so much better. You don’t get upset when a young kid becomes a teenager, or a teenager becomes an adult, or when an adult gets old. Well, Brian is just passing into the next phase.

John Lennon, 1967
Anthology
The Beatles were not the only rock group experimenting with Transcendental Meditation. The Beach Boys were similarly looking for meaning beyond the fame they had achieved as well. Certainly Brian Wilson was going through his own personal hell, a passage from cruel treatment by his dominating father into a state of mental illness that for years stifled his creative abilities.
I saw Brian Wilson’s first live performance after years away from music due to mental health issues and stage fright. It was moving to see him perform again knowing all that he’d been through. His genius had resurfaced through production of a new solo album at the time. He was coming up for air again, and has since created more music and gone on tour. Brian did not come out of his mental illness unscathed. But he did survive to thrive in an all-new way. In some respects, that it transcendent. 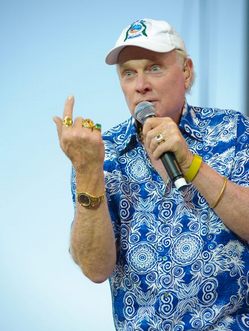 Brian Wilson’s Beach Boys bandmate Mike Love preserved his sanity through rock’s manic impacts (including close encounters with Charles Manson) by engaging in transcendental meditation. As quoted on the website TMHome.com, “It gives me rest and relaxation in pursuing activities and combats fatigue,” the singer-songwriter said. “It gives you a sort of high without having to resort to alcohol and drugs. That’s been a big benefit to my life.”

Mike Love started meditating after he met Maharishi Mahesh Yogi in Paris in 1967. He feels Transcendental Meditation has been central to surviving the life on the rock-‘n’-roll highway.

“You have the clarity and energy to entertain the types of activities we do with traveling and rehearsing and performing. When you meditate, all those feelings of grogginess and irritation and fatigue are eliminated. Your biochemistry changes. It’s very simple but amazing stuff.”

Those last words are interesting fare for those of us who run and ride. Running has long been associated with a change in brain chemistry that equates to a form of ‘therapy’ for the mind by releasing endorphins responsible for mood change. Likewise a long bike ride can bring on a transcendental flow feeling that leads to calm feelings both during and after the ride. The same goes for the flow of an open water swim. The motion and the real fact of floating over water is a perfect expression of mindfulness and freedom combined.

Even the most famous and talented people in the world feel the need for something greater within themselves. Transcendental Meditation leverages the mind to relax the body. Running, riding and swimming leverage the body to relax the mind. It works both ways. And you don’t have to travel to India or turn you life over to Sexy Sadie to do it.

Vicissitudes are defined as “a change of circumstances or fortune, typically one that is unwelcome or unpleasant. Alternation between opposite or contrasting things.”

We all need methods for dealing with that. Whether it is transcendental meditation of a simple three mile run to get a grasp on what’s going on in life, it’s all okay.

Christopher Cudworth is a content producer, writer and blogger with more than 25 years’ experience in B2B and B2C marketing, journalism, public relations and social media. Connect with Christopher on Twitter: @genesisfix07 and blogs at werunandride.com, therightkindofpride.com and genesisfix.wordpress.com Online portfolio: http://www.behance.net/christophercudworth
View all posts by Christopher Cudworth →
This entry was posted in running, Uncategorized and tagged brian wilson, maharishi yogi, Mike Love, The beach boys, The Beatles, TM, transcendental meditation. Bookmark the permalink.