Riding up to Chuck’s

Posted on July 24, 2017 by Christopher Cudworth

It is a sixty-three mile ride up to Chuck’s Lakeshore Inn from St. Charles, Illinois to Lake Geneva, Wisconsin. It’s a tradition we cherish each summer. The route we take is all backroads and has been handed down from generations of cyclists who first chose the roads over four decades ago.

It is likely that process involved some experimentation. The route was established long before the age of GPS, Garmin, cellphones or Strava. It is likely someone sat down with a series of county maps and plotted the route out by hand. Or better yet, there might have been cyclists who winged it for all they’re worth, and the route evolved over time.

That does not mean the roads are all perfect. Far from it. On several sections of the route the roads are broken up or fractured. Likely this is the product of a township or two that do not consider such backroads a priority. So the cyclist has the navigate across the worst of these with a dose of concern for the hindquarters.

On the other hand, there are places where the roads are both rolling and smooth. Shade graces the way for miles at a time. This was true even though we left at the relatively late hour of 7:00 a.m. to embark on the journey north. Some of this is the product of our aging constitutions. Both the hour of departure and the relative rate of progress have eased back a bit.

Not that some of us aren’t fit. But in any given year there is usually someone whose schedule has eclipsed their training. We used to cruise those sixty miles at 19-20 mph, wind or no. Some years the northwest or north wind would smack us in the face, so it was pace lines for miles. But yesterday was warm with a nice breeze but no wind. We rode fifty at a good clip but one of our party (and it has been any one of us over the years) had reached the extent of his training thus far and we needed to slow things down over the last 10 miles.

These are summer rituals and worth every moment of riding. Then we change at the beach in Fontana and pile into the cool water to ease out the crimps from riding and shoot the bull while waves from the many boaters out on the lake push us around. 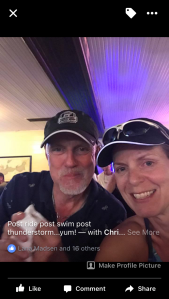 The final goal of the journey is lunch at Chuck’s, a lakeside bar and restaurant where the locals mix with the tourists and everyone seems to live and let live. One of the bartenders has been working there 19 years and does not seem to have aged a day in all the time we’ve traveled up there by bike. He smiled when the clouds gathered and the rain came down in sheets. “This is good for business,” he chirped at us over the bar. “It’s gonna get really busy now.”

Some people seem to thrive on service to others. This bartender has that knack. He was lining up tall glasses and mixing Bloody Mary’s four to six at a time. Nothing to it.

I tipped him $20 on a $60 bill that included a simple CHUCK’S tee shirt. Normally I’m not the acquisitive or touristy type to buy tee shirts or any of that ilk. But I feel a genuine fondness for the adventure of such journeys and have done this trip with a number of friends over time. Our little bike gang has expanded and contracted, but the two buds with whom we rode this weekend I’ve known since 1973. They’ve been cyclists far longer than I, and even got into triathlons back in the 80s before I dared think about it.

History is a funny thing that way. One of them insisted that I’d been along on the ride back when a rainstorm struck them at 40 miles and drove them into a barn. But I recall him telling me that story the first time I rode up with them probably ten years ago. “You were there,” he told me yesterday. “We have pictures,” he offered.

That’s how our brains work sometimes. Melding things together is a habit of convenience. There is too much time that has passed, and we can’t remember everything the way we should. 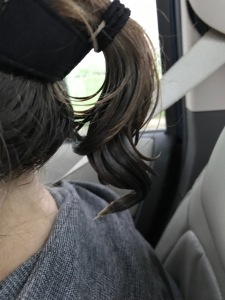 I honestly could not remember if my wife had ridden up there with us before. It seemed like she had a couple years back. But no, she told me. This was her first journey. “I like the route,” she said. “It’s pretty.”

It is indeed. Through the early morning fog we rode north. Up over the big rise at Central High school in Burlington then north through Hampshire up past Hebron, where the water tower is painted like a basketball because that little town won the state championship way back in 1952.

The ride up the Chuck’s is wonderful. It creates and recalls memories all at once. We all need time markers like this to make the year feel full and real. And a cheeseburger and a beer to make it seem like it won’t ever end.

As we left the restaurant the skies opened yet again. The storm had spread like a demented beach blanket across the Weather Channel map of southern Wisconsin and we got soaked on the way back to the car. Sue wrapped herself in towels in the car to keep warm. The storm chased us south, getting so dark to the north that one wondered if the end of the world would was coming about.

We barely beat the rain home, and then the skies opened up yet again as we went to remove our bikes from the back of the car. That rain washed off all the scuzz and drippings from our water bottles. It had been a hot ride north and no matter how carefully you try to take a sip, somehow the lines of sticky Gatorade or Scratch or whatever you drink sticks to the bike frame.

So the day was principally washed away. Our clothes were soaked, and shoes as well. We tossed all that into the laundry and settled into watching the last stage of the Tour de France in our dry clothes with happy legs and relaxed brains.

The ride up to Chuck’s is no Tour stage, but without quick access to France, we’ll take the backroads of Illinois up to Wisconsin. You make your Tour where you can find it.