I break for dogs and people

Posted on July 18, 2017 by Christopher Cudworth 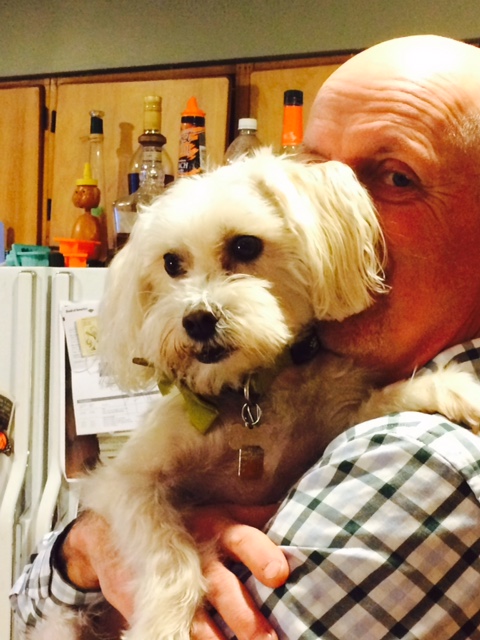 It’s a longtime habit of mine to stop and talk to people with dogs. Even in the middle of a run, or out on a bike ride at times, I will take a break to pet a friendly-looking dog and talk with the owner.

This morning presented another occasion to do just that. I was finishing up a four-mile run and had slowed to a jog on the path that loops around the wetland behind our house. A woman was walking her mid-sized poodle on the path. The dog seemed relaxed and willing to be petted, so I stopped and put out a hand with a greeting, “Hello pup!”

The dog sniffed his way over and accepted a pet on the head. “Oh, well, he’s okay,” she said in what seemed like both a question and an answer.

“Is he normally a jumper?” I asked.

The dog’s was named Duke. He huddled next to my leg and accepted a firm rub on his back. He was a sweet dog.

I told the story of the dog our family has had the last eight years. His name is Chuck. Rescued in the city by my son and a friend, whose fraternity held a beer bash to raise money for the dog’s vet bills. Chuck lived in the three-story frat house at the University of Chicago and was named after the building’s owner.  “Well, I can’t kick him out if he’s named after me,” the story goes.

It’s a tale I’ve told at least 100 times over the last eight years. It opens channels of thought and conversation with strangers. Everyone seems to love the romance of a dog rescued on the streets of Chicago.

But the tale is also a human tale. Because Chuck has played an important role in all our lives. First my daughter begged to bring Chuck to our home when my son started to travel. We had a ‘no dog’ rule in our house for decades, but we made an exception for the little Schnoodle that won our hearts. He wound up being a therapy dog to my late wife during her cancer and to all of us after she passed away.

I had shared that I was remarried, and that our families have merged through the process. “Our dog Chuck is even getting used to the cats, I told her.” Then I said, “My name is Chris.”

She replied, “My name is Maria.”

I shared the story of our dog Chuck and how he has helped our family and the woman stood there staring at me. Then she said, “I lost my husband two years ago to heart problems. It was very sudden.”

I walked over and gave her one of those barely touching hugs, the kind you give when you’re sweaty from running. More gestural than real contact. Then I stood back and said, “I’m so sorry.”

She had tears in her eyes then. She wiped them away with the shoulder of her shirt. “It’s still fresh,” she heaved a little. “But I suppose I am blessed. I have a sixteen year old daughter,” she smiled. I shared that everyone in our family has been grieving at our own pace. Off and on. Different stages. It’s an ongoing process in many ways.

“Well, we’ll see each other on the trail again I’m sure.” Then I readied to go. But before doing so I said, “You know, sometimes people are meant to stop and talk. I am so sorry for the loss of your husband. But thank you for sharing. And God Bless.”

He dog Duke was busy sniffing something along the trail so I didn’t disturb him again. I’m just grateful for the people and dog connections that have happened so often. So many wonderful people. And dogs. I’ve met them at Home Depot and at the pet store. At concerts and town picnics. I look at the dog, get a read on their demeanor, then ask the owner if it’s okay if I pet them.

Once in a while, people say no. Or the dog does. That’s important to respect. Not every human or dog wants unexpected contact. I surely respect that. And I still wish them well, and thank them for letting me know.

It’s a message of civility. And when I take a break from a run or a ride, nine times out of ten, the benefit is so wonderful. I learn something, and sometimes make people smile or laugh with a story, a joke or by playing some silly short game with their dog.

That’s why I break for dogs and people. It’s always worth it.

Christopher Cudworth is a content producer, writer and blogger with more than 25 years’ experience in B2B and B2C marketing, journalism, public relations and social media. Connect with Christopher on Twitter: @genesisfix07 and blogs at werunandride.com, therightkindofpride.com and genesisfix.wordpress.com Online portfolio: http://www.behance.net/christophercudworth
View all posts by Christopher Cudworth →
This entry was posted in running, Uncategorized and tagged dogs and people, I break for dogs and people, running break. Bookmark the permalink.

4 Responses to I break for dogs and people