Running and a leap of faith

Posted on April 6, 2017 by Christopher Cudworth 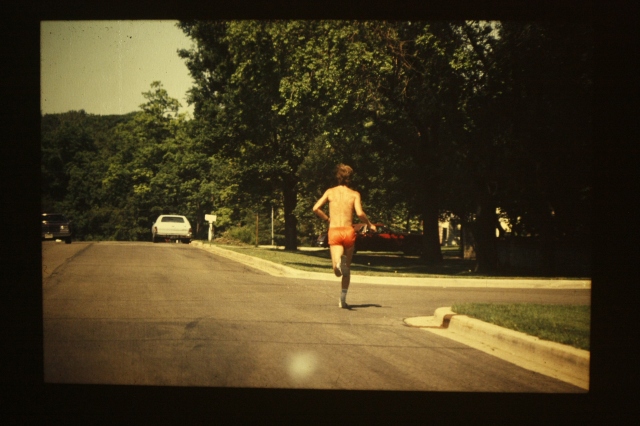 In the middle of my sophomore year in high school, my father moved our family from the big house we owned in Elburn to a small rental in St. Charles, twelve miles to the east. At fifteen years old, I was confused and extremely challenged by the move. I’d just finished a cross country season in which I tied for the most points on the varsity team, and we’d won our first-ever conference championship for the school.

I was also class President, although that did not mean much because I did not know what the hell I was doing. But it showed the level to which I was socially ensconced in the life of the school. And then we moved. Again. We’d only just moved to Illinois two years before. That had meant uprooting from elementary and middle school friends. All leaps of faith.

The reasons behind the move were financial, I am sure. But my father never actually admitted that. He’d blown through some money on a “business” that gutted our finances. Perhaps he and my mother did not think we knew the real reasons for the move. But we knew.

I don’t blame my dad. With four boys to raise in our household the expenses were profound. Then a bad economy cost my father the job he’d accepted in Illinois that moved us out from Lancaster, Pennsylvania.

One day I recall riding in the car with him and he let me put the radio on “my” station to listen to music. Then Janis Joplin came on the air singing “Me and Bobby McGee…”

“Freedom’s just another word for nothing left to lose…” she sang.

“Boy that’s true,” he muttered. It was one of his rare acknowledgments of my music at the time.

Years later I asked my dad why we really moved. Was it the gas shortage and trying to save money on my mother’s commute? Nah, he told me. “I didn’t want your brother to play basketball for that coach at Kaneland,” he admitted. My father dreaded watching games with the slowdown offense favored by the school. My brother transferred schools and went on to play Division 1 basketball on full scholarship. So my father’s decision paid off. But when I asked my dad, “I get that, but what about me? I was class president, top runner in cross country!”

But for those five months going back and forth from our new home in St. Charles out to Kaneland, my father arranged rides for me with coaches from the old school. I remain grateful to those coaches. It shows what great people they were. I’d be ready by 6:00 am. to ride from St. Charles out to Maple Park. Some of them were talkative while we drove while others preferred that I just sit there quiet on the way to school.

Wise use of time?

We’d arrive at school a full half hour earlier than all the other students. So I had some time to kill. Often I’d change into my track stuff and head out to practice high jump or long jump. It was just me and the sunshine and a lonely track. I’d set the high jump bar on the poles and rake the pit all by myself, jumping over and over. Somehow I thought that I’d get better that way.

I should have been running instead. But the relative thrill of doing more laps against jumping was a no-brainer. Plus, I was already physically taxed from the workouts we were doing. The track program at Kaneland was a tough gig. The year after I left, the Kaneland Knights won the state track championship. It was all due to hard work on top of the talent.

Actually, I really should have used the time to work on my studies. I was a C average student thanks to A’s in some classes and D’s in courses like Spanish and Algebra. If I did not like the work or method of learning, I’d just tune out. Some of that might have been made worse by ADHD. While I was never officially diagnosed, the signs of some creative attention disorder were certainly there.

So the exercise before class was probably good for my brain. Not to mention the stress relief from feeling like a Nowhere Man at fifteen years old. There I was, still a part of the life at Kaneland yet knowing that would soon come to an abrupt end.

So I went outside on nice mornings and did high jump and long jump. Truly it was a lonely escape from the strange reality of my existence. There was something satisfying about clearing a height all on my own, with no one around to witness. I think I jumped 19′ in the long jump in actual competition. A year later I went 40′ 4″ in the triple jump. And by the time I finished high jumping in college, I’d made 6′ 1 1/2″. My own height. Nothing special there.

It all came down to a personal leap of faith. At fifteen it was almost impossible to think about the next day, much less the next year. The idea of leaving all my friends behind and starting over was beyond comprehension. Little did I know that running would be the salvation in all that. And many other transitions in life. I never jumped that high or leaped that far, but I’ve run a long, long way. And that’s what really counts in the end.