Posted on March 24, 2017 by Christopher Cudworth

The classic hospital gown worn for a physical

In the little town of Elburn, Illinois, there was a local doctor known for his aggressive hernia checks during school sports physicals. For some less-than-apparent reason, the guy squeezed the balls of every athlete like heck. Perhaps he’d been bullied by an athlete in high school, and this was payback? Whatever. My friends dreaded going to the guy.

The world has come a long way since those dark days when people didn’t suspect public figures like priests or doctors of strange psychological behavior. I’m just thankful to have had a family doctor that did not squeeze my balls so hard that it hurt.

Those early days all came back to me during this morning’s physical for a new career opportunity. Along with the drug test, I dropped trousers and the doctor had me cough a couple times. No hernia. And no crushed balls.

The long form I filled out with lists of illnesses was mostly a long list of NO for me. But there was a spot for hemorrhoids. Ten years ago I dealt with that condition thanks to the 60-mile round trip commute to work. There was also quite a bit of stress going on as caregiver for a wife with cancer, and my mom had just died. Some types of emotional pain hit you right in the ass. The problem was profound enough that one proctologist suggested snipping a ring in my rectum. I told them NO, and willed myself better. It worked.

Overall, I was thankful to be able to check off so many possible diseases and conditions. There was a space to indicate whether there was ever any exposure to chemicals or gasses in the workplace. That made me think of a summer job working at Olympic Stain, the paint factory where turpentine and latex were occupational hazards. I’d been soaked head to toe a couple times thanks to pranks and accidents at the plant. Never good. So I wrote that down. Never know when it might come up in life again.

My blood pressure was 110/78 or somesuch. Pulse was up a bit given the wait time and tall. But it’s been 52 most days. Not bad.

The eye test was weird because I have a temporary pair of soft contacts until my hard lenses arrive next week. So I told that to the nurse, and she was fairly forgiving when I read off an entire line of numbers as letters. That was funny. Then I blinked and did it right. Pass.

In this physical,there was a ‘pee in a cup’ drug test as well. The procedures involve lots of talk about how the test is approved at different stages by the patient. But they make you dump your stuff in a locked drawer so you can’t cheat. I’d ingested a lot of water before the test but it hadn’t made its way through my system. But you make it work. Force yourself to pee. Can’t imagine what it must be like to have to pee in a cup for drug testing after a marathon or a world class 10k. Must take some sitting around.

In a touch of irony, I have another physical exam this Monday. That’s with my regular family physician. It was strictly circumstance the two should come so close together. So I’ll get to turn my head and cough again. The prostate exam is always interesting too. Bend over. Grimace as Doc massages the gland. Check for lumps or hardness. Don’t want cancer sneaking up on you from below. 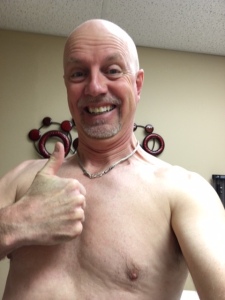 Life is all about staying healthy. Which is what makes it so strange that there are a bunch of apparently angry men deciding the fate of our healthcare system in America today. They seem more worried about cutting taxes than cutting cancer rates. More disturbed by the fact that seniors are costing the country money than they are about the fact that those are grandfathers and grandmothers, aunts and uncles of constituents. It will be interesting indeed to see if Trumpcare helps people pass their physicals in the future. And will America pass its physical as a developed nation, or will we languish down at 37th on the rankings of healthcare systems worldwide, as we’ve done with our corporatized, Darwinian version of healthcare that evolved as a mistake?

There are a lot of reasons to swim, run and ride. But one of the most important is the regimen it encourages in taking care of the body. Every year or so, we pass through the physical checkpoint and take a survey of our overall health. It’s a point of pride to “pass the physical” in some way. May you pee in a cup with pride next time you try. And try not to be too pissed that someone people care far, far more about money than your physical health.

Christopher Cudworth is a content producer, writer and blogger with more than 25 years’ experience in B2B and B2C marketing, journalism, public relations and social media. Connect with Christopher on Twitter: @genesisfix07 and blogs at werunandride.com, therightkindofpride.com and genesisfix.wordpress.com Online portfolio: http://www.behance.net/christophercudworth
View all posts by Christopher Cudworth →
This entry was posted in Uncategorized and tagged Obamacare, passing the physical, physical exam. Bookmark the permalink.