Nike Hijab and other fashion wonders

Posted on March 17, 2017 by Christopher Cudworth 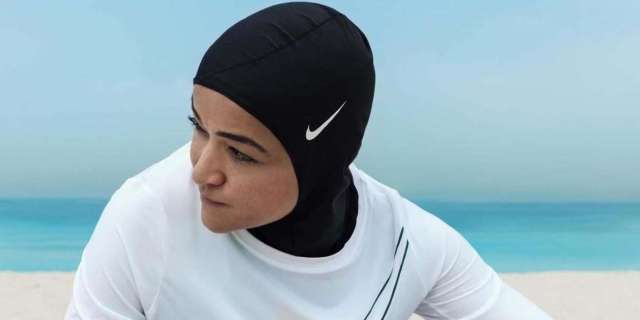 I love that Nike is coming out with clothing for Muslim women who want to compete in sports but maintain their religious tradition by doing so in Hijab. I watched a program about a women’s soccer team that wore less than practical forms of Hijab in the World Cup, and they progressed through the tournament until the organizers made them stop.

MSN.com quoted a former professional athlete who competed in hijab: “From my perspective as a former athlete who competed in Hijab, in the past, the big brands didn’t see the need or market for it as it was not “popular” and it was unheard of to see women train, exercise and compete in hijab. It is a recent phenomenon where more women have expressed a need for it and more professional athletes have fought for rights to compete with a headscarf, and have an equal playing field.”

The strange thing about the new Nike hijab line is that it won’t reach the market until 2018. That’s the best a major retailer like Nike can do? It takes a year to pump out head coverings and other equipment for the company that used to make spikes overnight for its top track prospects? What the hell, Nike people?

Suiting up and down

Ironies abound when it comes to how much men and women week to cover their bodies during competition. Watching basic changes in competitive swimwear alone over the years has been interesting entertainment. For a while, men’s swimsuits were pared down to the barest of all minimums. Their typically tiny butts were covered by a bit of Speedo fabric and the junk up front was captured by a similarly small sling of lycra or some other stretchy fabric.

But then it was discovered that certain high-tech fabrics could cover the body and make swimmers go faster. So swimsuits expanded for a while from knee to shoulder. But then they were banned, if memory serves. Yet world records continue to fall.

Among women runners, there is mixed acceptance of micro-small bun huggers. Some women rock them with panache. Others prefer shorts that don’t reveal that crack between the thigh and buttocks.

In track and field, there is no real parallel for running gear of such small proportions. Yet among triathletes there are men who rock the whole event in swimsuits.

The glimpse of an erect nipple used to be such a point of titillation in women athletes. But as competitive gear has evolved toward performance over appearance, the entire body has become fair game for exposure.

The world is not in a state of moral collapse because people have figured out that men have penises and women, vaginas. If the world is in a state of collapse for any reason, it is because repression of these basic facts is causing conflict in the minds of those too uptight to accept that men, women and transgender people have a right to govern their own body parts in the style they choose.

So if a woman wants to cover up and compete in hijab, she should have the right. Just so long as it is her choice and it does not provide a competitive advantage over other athletes. We saw how swim gear evolved back and forth.

Some would argue that countries “forcing” women to compete in hijab amounts to a competitive disadvantage. Not everything changes overnight. And let’s not forget that the sight of a woman’s ankle peeking out of a swimsuit was once regarded as major boner material.

Still, there have been mistakes made in athletic wardrobe. Many of them in fact. Those unfortunate cycling kits for the Colombian women’s team a few years ago? Bad design.

But there seem to be a few types of athletic gear missing from the needs of people around the world. Here are a few more suggestions for Nike, in case they want to pursue clothing for niche markets beyond Hijab:

Nike Liberal: No gear at all. Just a Nike tattoo on the Left butt cheek.

Nike Radioactive: Triathlon gear for swimming in the Pacific Ocean after Fukishima

Nike MAGA: Gear that looks great at first, but falls apart when you look at it closely.

There you have it. An entirely new set of products for Nike to launch in the near future.

Christopher Cudworth is a content producer, writer and blogger with more than 25 years’ experience in B2B and B2C marketing, journalism, public relations and social media. Connect with Christopher on Twitter: @genesisfix07 and blogs at werunandride.com, therightkindofpride.com and genesisfix.wordpress.com Online portfolio: http://www.behance.net/christophercudworth
View all posts by Christopher Cudworth →
This entry was posted in running, swimming, track and field, triathlete, triathlon, we run and ride, We Run and Ride Every Day and tagged nike hijab, trump supporters. Bookmark the permalink.

2 Responses to Nike Hijab and other fashion wonders