Toilet seat training and what it means to triathletes

Posted on January 10, 2017 by Christopher Cudworth 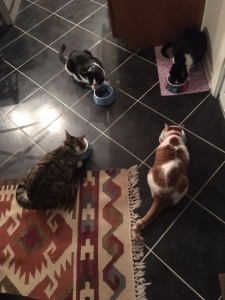 Growing up in a family of four boys, there was not much call to put the toilet seat down after going to the bathroom. Had we the pleasure of a middle sister or so, the complaints might have seeped through to our consciousness.

But my mother never asked us once to put the seat down. She was frankly too busy making dinners and working a full-time job as a teacher to worry about the seeming trifles of sloppy, athletic boys. The one thing about which we were organized and attentive to a fault was chowing down when dinner was served.

We were like a bunch of hungry cats. She’d sit at the table and gaze at us with joy and love, excusing our many boyish habits despite the fatigue it likely caused her.

Fast forward to actually living with a woman you love, or a houseful of women, and things are quite different. The etiquette of putting the toilet seat down is necessary to avoid causing women of any shape or size to fall into the bowl when sitting down.

This is especially important during the night, when the rude shock of feeling your ass cheeks slipping down inside rim of the toilet bowl is a rude consequences of forgetfulness.  No one deserves that.

It’s that last part that toilet seat training is all about. Men who don’t think about the toilet needs of women are insensitive jerks. I’ve written before about how disturbing this can be in a Porta-Pottie, when urine covers the seat making it impossible for any woman to use the facility.

In the heat of pre-race anxiety, perhaps one can expect that sort of behavior. But really, not. If you’re a guy that pisses on the seat of a Porta-Pottie and walks out leaving that mess for someone else, you are the scum of the earth. At least put the seat up before taking a whizz! Before you go. If a woman has to put the seat down after that, she’ll likely be grateful that’s the only problem.

What we’re really talking about here is conscious existence. That is, taking note of behavior in all areas. The truth about this manner of behavior is harsh. If you’re leaving the toilet seat up there are likely other areas in life where your lax behaviors are costing you and other people problems that you may not recognize, but still exist.

How is your sock drawer, for example? Are you always searching for socks that match? And when is the last time you tossed a few items from that drawer of performance tees, that third drawer down in your dresser stuffed full of formerly valued race tees that now looks like an octopus convention? If that drawer looks like a science experiment gone wrong and colors are sprawled all over with tentacle sleeves grappling each other, the science of your daily life is awry. 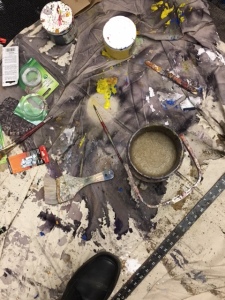 I’m simply sharing here a set of self-critical admissions about a life of clutter and attention deficit disorder. Right now my art studio is a mess after a couple painting sessions. I know that I paint better when things are cleaned up, but the eagerness to complete a work sometimes leaves a trail of detritus all over the room.

When I walked into the studio of an artist down the hall from me at Water Street Studios, his palette was neatly mounted on a movable wire bench. The paints that he needed lay in perfect order next to the palette. His work, impressionistic as it is, reflects this appreciation of order. Compositions, simple. Expressions, elegant. His overall body of work has an order and an intentional feel to it. That’s what people who buy art want to see from an artist. What are you trying to say? Is there something more than this one piece of art that I’m seeing?

Among triathletes, this love of order is an art form as well. The transition zones at most triathlons are a study of the human condition. Some are messy. Others are a well-arranged composition that puts everything in a predictable place.

This is the exact same mental process as putting the toilet seat down. You are preparing a place for another person, but this time it happens to be you. Yourself. The swimmer appreciates that the bike and gear is well-arranged. The cyclist revels in the fact that the running shoes and cap are easy to don. And the runner can be on the way knowing they have not wasted precious minutes dawdling around in transition. That’s the way to Triathlon Zen.

All this is a matter of self-awareness. With all the distractions in this world, it is easier than ever to clip along from event to event in life without pausing to consider what it is we’re really doing. For me, writing this blog is a discipline that I love. My worst flaw is the proofing portion of producing it. Too many typos exacerbated by the fact that WordPress loves to flip deleted paragraphs and sentences back into place. So my resolution this year is to proof better out of respect to you, my readers. Because I respect that typos piss everyone off.

Typos are like leaving the toilet seat up. So is forgetting your shades at a triathlon, or starting out the run with your bike helmet still on your head. Admit it, you’ve seen that guy or gal out there, haven’t you? Or their numbers are flapping in the breeze or flying off the front of their helmet.

Because that’s what we find in cultural falsehoods such as the supposed War On Christmas, in which a certain sect of repressive Christians gripe that the Christmas holiday is being disrespected somehow. That contention neglects the fact that Christmas has long been whored up by the very faith that expounds upon it. So let’s be honest: hypocrisy is the hallmark of false avengers.

Repression too, is the enemy of true conscience. There’s a clear difference between being repressively obsessive versus being attentive and intentional, considerate or committed to reason. The things most people seek to repress in society are the things they fear most about themselves.

That’s why the term neo-conservative had to be invented. It was necessary to describe an already outmoded and dysfunctional worldview that keeps coming back like manic depression. It’s a reactionary response to being called to account for dysfunctional aggression.

For example, if you were to suggest to a neoconservative that they should put the toilet seat down in consideration for others, one of two things will typically happen.

1)They’ll nail the seat up or…

2) They’ll take it away altogether and blame you for even suggesting toilets seats are necessary in the first place.

This is the Ayn Rand school of neoconservatism. Strip away the necessities of life to prove that you are tougher and smarter than those liberal do-gooders who care about piss on the toilet seat.  Onece the toilet seat has been removed, the insults follow. “There, are you happy now, you libtard? Look what you did!” This is what angry austerity gets you. Irrational reactions and

This is what that brand of angry austerity common to neoconservatism gets you. Irrational reactions and antediluvial “solutions” that don’t really solve anything other than proving some ancient law can still be applied if you impose it with enough force.

This is a longstanding disease of the mind, this addiction to originalism and literalism that turns constitutions and scriptures into legalistic boors. It’s all borne of the anachronistic belief that the ideology of selfish concern is far more important than the welfare of the whole. This is why ancient cultures of Judea demanded that God provide them kings to rule over the people. God answered, in all earnesty, “Follow my ways, and kings will not be necessary for you.”

But the people wanted closer manifestations of control. They sought someone other than God to dish out the rules and repress their enemies. Those under Moses griped about the manna rather than being grateful for their daily “bread.” The desire for wealth and power and a land of their own tempted them to build Golden Calf to worship. These things never change, you see. America is in the very same process as we speak. We now have our Golden Calf and the new administration is ready to piss on your toilet seat or take it away altogether, if you don’t like it.

And we can be pretty sure that God will not be amused.

But we must all cultivate our own garden. So I’ll go clean up my art studio today. I also have a plan to re-organize the materials.

Every Sunday at home I go through my dresser drawers and inspect them for ‘crossovers,’ those socks that make it into the shirt drawer and the underwear that shows up among the training tees. Life happens.

This isn’t about behaving like gerbils in a cage, but it helps to burrow into our cages now and then, to sort things out. Now if I can only bring myself to get on that training wheel I call a bike, things might be headed in the right direction come spring.

Three weeks ago Sue casually mentioned that my diligence in the toilet seat category was still in need of improvement. That gave me great reason to pause and consider my overall approach to life.

I’m not sure it was all my doing. If the toilet seat was still up now and then, it might have been someone else, because I’ve been dialed in for real on that. I am now the Toilet Seat Zenmaster. If there are toilet seats left in the UP position now, it might be because other boys/men in the household are leaving them up.

I can take care of myself in that respect, and gently remind others of their obligations as well. I want to be someone with whom it is easy and fruitful to live. All around.

Which is also why I was happy to grab the newspaper for her this morning, and make her coffee as we get ready to leave for the train together. Because the only thing better than helping yourself through improved self-organization is to help someone else make their day a little better.

Whump. Put it down boys.

Christopher Cudworth is a content producer, writer and blogger with more than 25 years’ experience in B2B and B2C marketing, journalism, public relations and social media. Connect with Christopher on Twitter: @genesisfix07 and blogs at werunandride.com, therightkindofpride.com and genesisfix.wordpress.com Online portfolio: http://www.behance.net/christophercudworth
View all posts by Christopher Cudworth →
This entry was posted in tri-bikes, triathlete, triathlon, triathlons and tagged composition, Growing up in a family of four boys, my mother never asked us once to put the seat down., Right now my art studio is a mess, The etiquette of putting the toilet seat down, The one thing about which we were organized and attentive to a fault was chowing down when dinner was served., triathletes, triathlon transition, triathlons, We were like a bunch of hungry cats. Bookmark the permalink.