The cycling gift that keeps on giving

Posted on December 13, 2016 by Christopher Cudworth

Last year in December I started the research process to identify the right kind of bike to replace my Felt 4C, which had succumbed to a combination of my own fatigue and stupidity. I had gotten home from a cold October ride during which a low-grade flu made for a long, angry slog. All I wanted to do was park the car in the garage and get into bed. But that was a mistake. I clicked the garage door opener and drove forward. Chunk. My Felt 4C Carbon Fiber Red Rocket Bicycle was still on the roof and it got crunched.

That meant I didn’t ride during November at all. I did take the mountain bike out a few times in a sad testament to the death of my Felt.

Then the New Year threatened to arrive without a plan. So I wandered some local bike shops and found a Felt aero bike that held promise. But it turned out to have no drops in the handlebars. I still like a road bike for racing crits. So that was out.

I took the idea of a new bike to my friend Bruce Heidlauf at Mill Race Cyclery, who helped me think through a few options. The bike he suggested that really resonated was the Specialized Venge Expert. 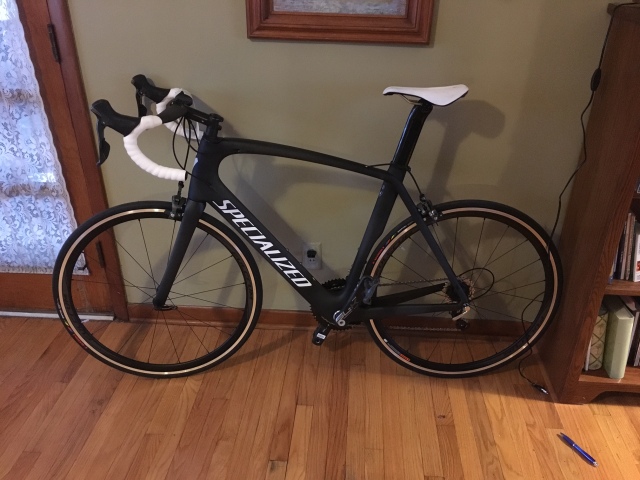 That bike turned out to be a good choice. Then Sue and I took a trip up north on a bike fit date with  Jessica Laufenberg at Rocket Bicycle Studio in Verona, Wisconsin. It might not seem like a romantic venture to you, but watching my gal perched on a bike fit machine might be one of the loveliest things I’ve seen all year.

And so it went that my Specialized Venge was set up for success. Sure enough, my race pace increased last year during the bike segments of triathlons. Our longer rides were much smoother as well.

I did leave the 44cm bars that came with the 58cm frame bike. They’re perhaps a bit wide for my shoulders and there was occasional fatigue from that on longer rides. And when we were out west on a triathlon training trip in Arizona, Sue and I rode a pair of Specialized Robaix bikes that were quite sweet. Those bars were 42cm and felt just about perfect. I actually measure out at 40cm according to every bike fit I’ve had done, but sometimes the middle ground is best.

Significantly, my longtime cycling partners commented right away on my riding position on the Venge. “You look a lot better on that bike,” said my friend Jack. I know very few people who know more about bikes or have ridden in more situations than JB. He raced CAT 3 in his day and can still light it up when he wants.

The same encouraging feedback came from my friend Greg, who raced a bunch of triathlons in times past and has ridden several Tour de France stages including Mont Vontoux. Greg has always enjoyed riding free an strong. He doesn’t care for cyclometers all that much, and pedals his LeMond frame with the best of them when he’s fit.  Between the two of them, they were my support network starting out. We’ve been friends since high school when we ran cross country together, and have trained many miles in many modes since. Running. Cycling. Cross country skiing.

When I started out in cycling, I rode a steel frame Trek 400 given to me by my brother-in-law. But once I purchased the Felt, life began to change. I could suddenly keep up on most rides. Those first few years, I raced a bunch of criteriums. All told, I probably put 40-50K on that Felt before I crunched it. Sadly.

Come January I’ll test some bar widths on the Specialized and see if that’s a benefit. I’ll actually need to buy new bars if aero bars are in the future for triathlon racing. The bars that come with the bike are not suited, I am told, for clip-on aero bars or anything like them.

It all worked out pretty well from last December to now. I started paying for that bike in January 2016 and finished it off by March 1. That was the goal and Bruce was great in helping me make that happen. It goes to show you that a local bike shop has a lot of value if you put some trust in it.

The Specialized will be up on a trainer in our bike room at our new place. So far I’ve been riding the Waterford to get in some basic pedaling. It’s certainly true that cycling is the gift that keeps on giving. But having a nice bike is like a gift from Santa every day.

Christopher Cudworth is a content producer, writer and blogger with more than 25 years’ experience in B2B and B2C marketing, journalism, public relations and social media. Connect with Christopher on Twitter: @genesisfix07 and blogs at werunandride.com, therightkindofpride.com and genesisfix.wordpress.com Online portfolio: http://www.behance.net/christophercudworth
View all posts by Christopher Cudworth →
This entry was posted in Uncategorized and tagged buying a new bike, cycling, specialized venge expert. Bookmark the permalink.