Through clouds and winds and mountains

Posted on August 18, 2016 by Christopher Cudworth

We’re called Flatlanders here in Illinois for a reason. The terrain does not feature many hills, much less mountains. 150 miles to the north, west of Madison, there are plenty of hills. We travel there to ride the Ironman course and participate in rides such as The Wright Stuff and Horribly Hilly. The last hill in the latter features a 2000 foot climb to the top of Blue Mound, a rise in the landscape visible from 40 miles away.

But back home in Illinois, the best we can offer is a glacial moraine called Johnson’s Mound. The road curls through deep woods into the park and climbs the northern side of the closest thing we have to a mountain. It has a section of 11% grade. That’s what you get when you live in Illinois. 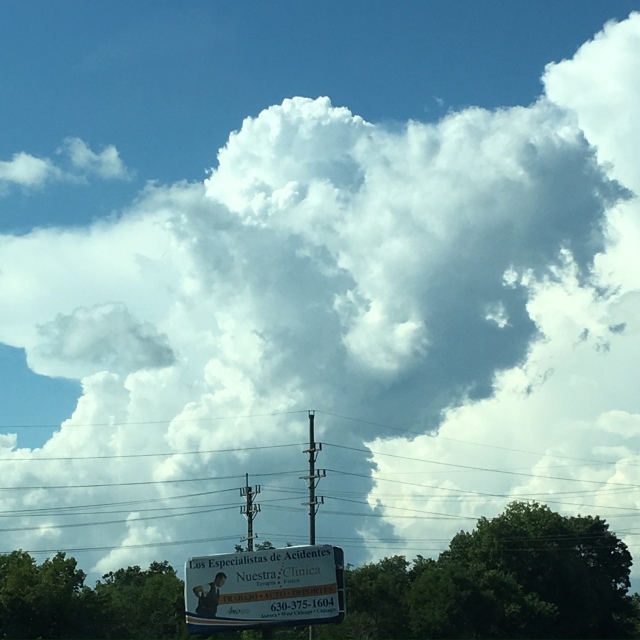 Yet we have something else to offer resistance on the road, and plenty of it. That something is called wind, better known as the Illinois Hill. There are headwinds and crosswinds, tailwinds and shifting winds. Winds that change from West to East when you turn around and head back home. Winds that kick your tail and then kick it some more. Winds that grab your bladed spokes and laugh at your aero bike and position. Winds that try to wipe the contact lenses right out of your eyes. And winds that lovingly caress you on calm summer evenings.

We have it all.

We also have plenty of clouds, in equal variety to the types of wind. There are high floating cirrus clouds in fall. Low scudding storm clouds, gray and sullen in winter. Impetuous mixes of nimbus and cirrus in spring. And tall, foreboding storm clouds in summer.

These last clouds, filled with the furious energy of heat and moisture and sun, can tower 50,000 feet over the earth. Some rise over Lake Michigan to the East like a wall of mountains. They have their bright peaks and low valleys just like real mountains in the Rockies. As we ride toward them with the sun setting, they grow temperate and morose, a purple mountain’s majesty of angled sun. The tops glow pink and the horizon mixes with their bottoms. Sometimes lightning flashes and we know it will rain over the lake. 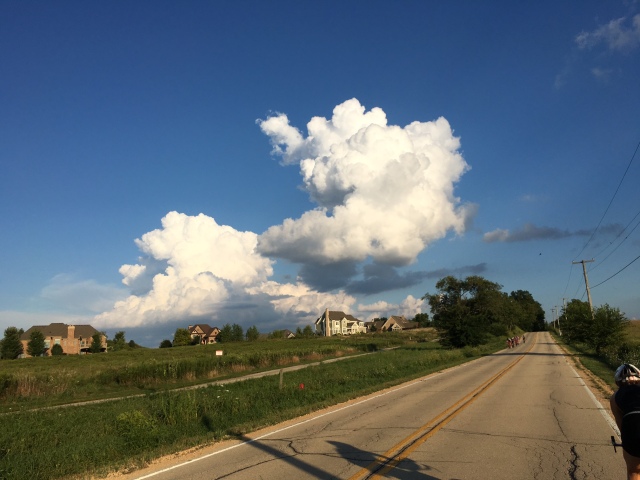 There are tall cumulus clouds that rise over the farmland. That landscape, formerly composed of deep prairie, is now a corn desert that extends 150 miles to the Mississippi. The clouds over this terrain rise in anvil shapes. They take on the size of furious gods. If these clouds roll or drift east we get rain.

Storms typically arrive on a crisp ridge of dark clouds  punctuated with a clean white line where the temperature of the air changes. The air then cools. Rain pours across the earth in sheets. Once the dark clouds move past, a wall of gray, flat rain and clouds takes over, driven by the sometimes insane winds raging through the maple trees.

A few years back a storm that held a microburst came roaring right through our neighborhood. The winds uprooted aged old maples and knocked down an entire parade of power lines. It took days for the work crews to fix the mess and right the poles. All because some angry clouds and a bitchy little wind wanted to have some fun.

We’ve been caught in conditions similar to that while cycling. We tried to beat the storm one night a few years ago, but it caught us out in the open. The rain stripped the mascara right off my girlfriend’s face. I felt rivulets of cold water slipping between my ass cheeks. We were soaking wet, and half laughing. Yet the storm was scary.

After it cleared, and the storm clouds passed, bright white clouds appeared on the western horizon. We pedaled home grateful to be safe and not struck by lightning. It is reported that a lightning strike can stop your heart and disturb the electromagnetic pulses that keep it beating for the rest of your life. If that happens, it takes powerful medicine to kickstart the ticker lest it just stop beating and you die.

Which should make you appreciate the power of the skies, and not worry whether you get to ride among mountains or clouds. There is majesty everywhere if you respect it. But don’t always expect it to respect you. That’s not how it works.

So we run and we ride and we even swim under these furiously changing skies. It is ours to draw energy from the experience.

2 Responses to Through clouds and winds and mountains