The sweet smell of progress

Posted on July 18, 2016 by Christopher Cudworth 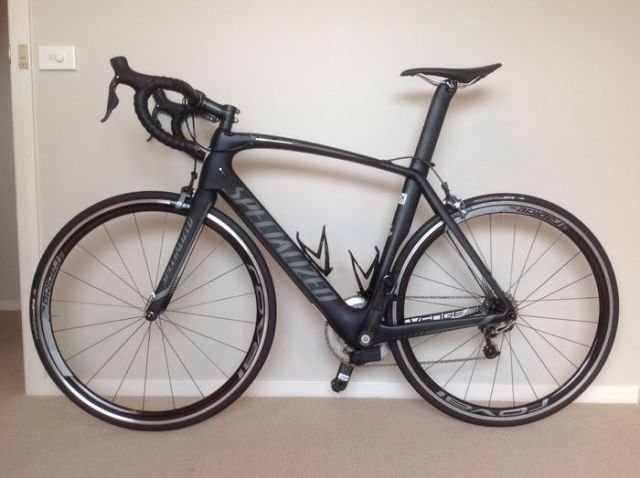 When I was researching a new bike this past winter, the weather was typically raw. In the middle of that cold season, it’s a bit hard to imagine what a new bike will feel like.

At the time we had joined a computrainer course at Mill Race Cyclery in Geneva. In those sessions, I was riding my Waterford, a classic steel frame bike with a big crank setup specifically designed for racing criteriums. That was the bike my brother-in-law, a former Cat 3 racer in the 1990s, had ridden to high places for many summers.

There were things to be discovered in that computrainer work last winter. My one-legged pedaling was weak. So was my wattage. Of course, that was the result of a significant layoff from November through January. I was out of shape.

Yet the pedaling issues and my form on the bike were concerns that resonated even after I purchased the Specialized Venge Expert. Even that process was aimed toward more efficiency. I paid for the bike in a series of cash installments because I’m sick of owing money to credit card companies. In fact, at this moment I am debt free in that respect. Paid them all off. That alone is a liberating feeling. Try it. Then use credit as a tool, not a crutch. It’s hard sometimes, but it works wonders.

After that last payment on the bike, when it became mine, I set it up on the computrainer and started to ride. But you can’t really tell what kind of bike you’ve purchased on a computrainer. There’s no road feel. No real response. That would come later, when the weather broke.

First came a bike fit with Rocket Bicycle Shop in Verona, Wisconsin. Jessica Laufenberg tested my pedaling motion and holy heck, the computer showed that the entire operation was not lopsided. All quads. No hammies. And stronger on one side than the other.

This spring and summer I’ve worked like mad to improve that technique. On every ride, I concentrate on full, even pedal stroke. The new fit also helps. Paying attention to the full pedal stroke helps the climbs so much. It also drives a more powerful flat speed. And when conditions are right, shifting into a big gear now produces more speed.

I’m consciously focused on balancing that newfound strength with a high cadence during most of the riding I do. It’s too easy to fall into a lazy, mid-level pedal stroke if you’re not vigilant. It’s like falling asleep on the bike.

But the concentration is paying off. Two weeks ago in a Sprint Triathlon, the course was rolling and there was a mid-level breeze. I came out of the swim into air that was cool and enervating. From point to point on a 15-mile circuit, I rode hard. And averaged 22 mph. Then got off and ran 7:13s for the 5K.

That’s the territory in which I want to operate. However, when I first looked up the results, they showed 18.7mph on the bike. I was crestfallen. To my relief, those initial result postings were somehow not accurate. That’s happened on several triathlons and duathlons. So I don’t look at the results for a day or two. They often change.

Because it made no sense to me at the time. No one had passed me in the bike stage. I passed dozens of riders. I know how fast I’m going even when I don’t use the bike computer. That’s how I’ve chosen to ride this summer. I don’t want to be chained to the computer and be thinking I’m going too fast or too slow. Just ride.

And the riding is better because of that. I do check the numbers when all is done. Strava is good for that. And so far, the sweet smell of progress has wafted my way. I’ll be truly happy the day I average 22+ for the Olympic distance, and know that I can do that.

For a variety of reasons having to do with bike frame size and standardized components, my aero bike has 44cm bars when I need 42, or even 40. But that’s a challenge for next winter when I’m not riding so much.

For now, the results are there. As I write this, I’m sitting in the three-season room of my house with the screened in porch windows open and the sounds of summer all around. From the TV in the other room I can hear the sound of Phil Liggett and Paul Sherwin describing progress in the Tour. This is the little sanctuary of July. The height and depth of summer. And it feels good to be in it.

Yet the real sound of summer is the whirr of bike tires on the tarmac. And when it sounds a little faster, that’s a sweet sound indeed.

Christopher Cudworth is a content producer, writer and blogger with more than 25 years’ experience in B2B and B2C marketing, journalism, public relations and social media. Connect with Christopher on Twitter: @genesisfix07 and blogs at werunandride.com, therightkindofpride.com and genesisfix.wordpress.com Online portfolio: http://www.behance.net/christophercudworth
View all posts by Christopher Cudworth →
This entry was posted in cycling, triathlete, triathlon, triathlons, Uncategorized and tagged bike fit, criterium racing, progress on the bike, Specialized Venge. Bookmark the permalink.