Posted on January 28, 2014 by Christopher Cudworth

What may be the world’s heaviest bike, donated to Goodwill. Good riddance.

Which is why the Eddie Bauer bike had to go.

The bike has a funny history. We bought it for my daughter, who never really rode the thing. Then she dutifully took it with her to Augustana College but the hills are so steep no one really rides their bike around campus. So it sat there for two years.

Then when she moved home she left it behind in the dorm. Forgot it was even there. So we called and rescued it with the help of the dorm manager, who using two cranes and a skid steer, moved it into a storage cabinet for safekeeping until we could come pick it up.

Then we moved the bike over to a house where my daughter was going to live the next term. The heavy bike also sat there largely unused.

Finally she brought it home when she finished college. Last summer she tried my late wife’s Trek Navigator, which weighs 1/3 what the Eddie Bauer weighs, and she liked that. So the EB is no longer useful in our household. It never really was.

I do not blame my daughter for not riding the Eddie Bauer bike. It is quite possibly the heaviest bike ever manufactured for its size. My humble estimate is that it weighed 35-40 lbs. The frame appeared to be made of solid metal. It was blue, shiny and. Heavy.

A solid chunk of blue metal.

Of course it rolled like a dream downhill. But try riding a solid chunk of metal back uphill and things get real, real fast.

It might make a perfect commuter bike for someone, however. No one could saw that frame from a Stop sign, not without an industrial grade saw and an extension cord an inch thick to feed the power it would take to steal that bike.

And if a bus ever hit you while riding the Eddie Bauer, the bus would likely lose.

I conducted several odd experiments with the Eddie Bauer bike before letting it go.

First I strapped it to the railroad tracks and wouldn’t you know it, even a freight train could not flatten the Eddie Bauer bike. Instead it derailed, exploded and killed 50 people after pushing the bike 438 miles into the hills of West Virginia. But wouldn’t you know it, the authorities brought it back to my house and told me, “Keep this thing away from public places, would you please?”

Next I took the Eddie Bauer bike over to Fermi Lab and clandestinely set it in the path of the Collider beam, but even the power of Quarks and particle physics could not penetrate its steely frame. 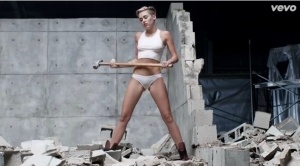 Is that the Eddie Bauer bike peeking over the rubble in the background? Yes, over there.

Finally I took it to the site where Miley Cyrus was filming the video for Wrecking Ball.

Which has gotten more than 508M views thanks to the presence of the Eddie Bauer bike in the background. I’m pretty sure that’s why so many people watched it. To see my amazing bike.

Well, during filming Miley took a sledge hammer to the Eddie Bauer bike frame and it would not budge or even fall apart. That made her even hornier, to the point where she actually shed all over her clothes and rode (yes you heard that right) a giant ball on a chain trying to work off her frustrations. I guess Eddie Bauer really turns her on.

Having passed the test of a somewhat sturdy implement, I decided to donate the Eddie Bauer bike to Goodwill, where people go to find such objects, and pay only $6.99 on average for the luxury of putting someone’s second-hand tools to good use.

God Bless the Eddie Bauer. I hope it serves someone well. But watch out for the seat if you buy it from the Batavia, IL. Goodwill store because Miley Cyrus twerked on it. She’s a good little mechanic, it seems.