Are we ready for zombies that run and ride?

Posted on September 19, 2013 by Christopher Cudworth 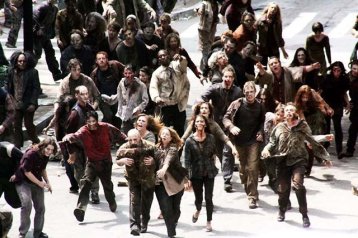 Walking Dead or the 20 mile mark in a marathon? Hard to tell sometimes.

My daughter just finished a NetFlix marathon watching past episodes of a show called The Walking Dead. It was a pretty grueling effort to catch up on 4 full seasons or so. But she’s a tough girl when she needs to be, and watching zombies die all over again and again and again is something that just needs to be done sometimes.

Every time I’d walk in the room to say hello or ask her if the dog needs a walk, I’d turned to the TV and see another zombie’s brains splattered on the wall behind their head. “It’s not always like that,” she’d laugh and tell me. “You just happen to walk in when they’re shooting zombies.”

The Not So Walking Dead.

I admit the whole zombie thing makes no sense to me. If any of those zombies was ever treated to what we call a “decent burial” they would not be walking around groaning and talking and casting evil eyes toward their human victims. See, when people get prepared for burial by a funeral home it’s a pretty intrusive process. What we see when we view our loved ones at a funeral is an elaborate ruse. Their eyes are Superglued shut and there are quite a few other tricks used to make up the face and bodies of our dearly departed to make them presentable for the living.

It seems we’re willing to ignore all that to indulge our very weird fantasies about dead people coming back to life to eat us. Or whatever zombies do. I haven’t paid enough focused attention to truly understand the role of zombies in our living ecosystems. It definitely seems like they might upset some social dynamics, especially at cocktail parties when their rotting teeth keep falling into the finger food tray. Did someone say finger food? Keep it down, the zombies love appetizers.

Actually, I think zombies are stupid for wanting to come back to life. They’d have to be pretty dumb, desperate or bored to want to come back to a world where Honey Boo Boo and little girl beauty pageants are tolerated for any reason. When are people going to realize that the phrase “cable reality show” is an oxymoron?

Where you can find real life zombies

The sport of cyclocross has been known to produce a few zombies.

All that said, I am here to tell you that I have actually seen living zombies. Stand at the 22 mile mark of any regulation marathon and you will see plenty of zombies, especially if you hang out past the time when the 12:00 mile pace. At that point in a race people are basically trying to get along like the actual Walking Dead. The only difference between marathoners in oxygen debt or lactic acid overload and real zombies is that zombies don’t stop at water stations.

Zombie cyclists move through the murk and mud in an early version of the Tour de France.

I’ve seen zombies riding bikes too. Our weekend group ride has been known to produce a zombie or two when the pace picks up and the route extends past 60 miles. That’s when Zombies On Bikes begin to appear. It is sad to see their wretched faces, gazes fixed just over the front wheel in an effort to keep moving forward. They raise their water bottles to drink and you almost think the fluids they ingest will pour out their rib cage like those moonlit crewmates in Pirates of the Caribbean.

I have become a zombie myself at least 10 times in my running and riding career. The worst moments are pretty hard to take, when you know you’re dead and don’t really care to survive. That’s when it’s hard to find motivation to be anything other than a zombie. Just one foot in front of the other. Keep on pedaling. Chain yourself to the saddle and stay in the draft or risk falling to pieces.

The three most memorable zombie moments in my career include:

1. The Lake Geneva Marathon when I wound up seeing stars at the Yerkes Observatory just past the 20-mile mark. Sat down to rest and never got back up until someone threw me in a car and drove me to the finish.

2. An 80 mile group ride in April, during a windstorm, in which we still averaged 20mph. I do not remember the last 20 miles of riding. I was simply too dead to care.

Some very healthy zombies pace themselves so they won’t die in the last miles of a half marathon.

Coming back from the dead is not easy. Sometimes a Powerbar is all you need, or a strong swig of electrolytes. But if that doesn’t work the only alternative is to stumble or pedal home and try your best to recover.

I’m pretty sure if you produced a TV series titled Running Dead it would be twice as scary as the series Walking Dead. If zombies could run, the odds against human survival in the face of an onslaught by a group of sprinting zombies goes down quite a bit.

And how comic would it be to see a Zombie Peloton riding through town, chomping at the bit for human flesh while riding Trek and Felt and LeMond bicycles.

It seems like Walking Dead are boring by comparison with really active, fit zombies who have real endurance and speed. Someone should make that show. They really should. I’d be willing to take on a role in that series, even the love interest. Once you’ve had a little zombie action, it is said, you never go back. Or so they say.