Life between the cornstalks

Posted on October 8, 2018 by Christopher Cudworth 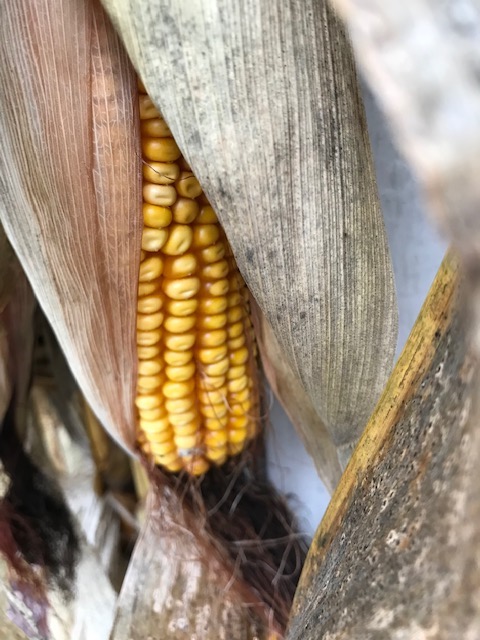 Saturday morning we rode into a stiff west wind following early morning rainstorms. The roads were so wet the rooster-tails of the rider ahead of you made it difficult to see as rainwater coated the lens of our sunglasses.

But it wasn’t unpleasant riding despite the early morning conditions. We traded pulls while heading into the wind coming at us from a 45-degree angle.

Our route took us into open country, out among the cornfields where it seemed there was nothing to abate the wind but the dried, shredded wall of cornstalks waiting to be harvested.

At fifteen miles we turned south and felt the relative tailwind begin to push us along. The average speed lifted immediately. We rode side by side now, talking a bit and keeping an eye and ear out for cars or trucks approaching from behind. Blessedly, there was little real traffic out among the freshly harvested fields of Illinois.

Later that day we’d drive out in the country to harvest a few wayward corn stalks to mount on our front porch pillars. We feel no real guilt or get a sense of stealing considering how much corn actually grows in Illinois. The harvest process scatters seed in the flat fields where huge flocks of Canada geese walk among the fallen corn to pick up up seed with their thick black bills. The sight of live geese in the fields always brings a thought of decoys to mind. There are hunters around, but enough to make much of a dent in the regional goose population, whose numbers likely top 50,000 in the Chicago region alone. 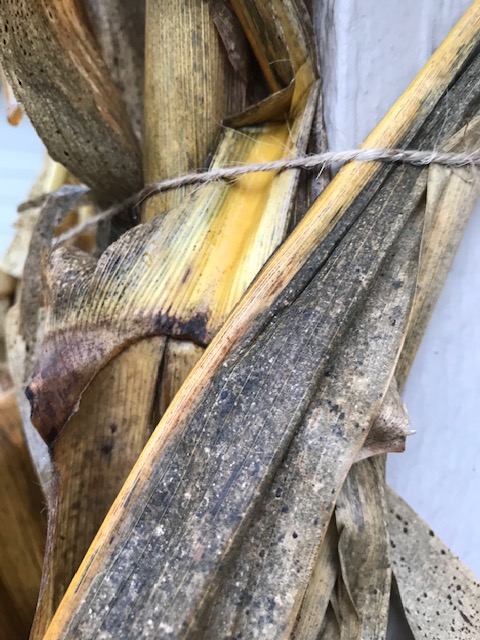 The geese in Illinois, like so many other states in this country, don’t even migrate any more. They have everything they need to survive cold winters, especially neatly mowed golf courses and corporate campus lawns. In many ways we’ve genetically engineered a perfect goose environment.

We cyclists are just like flocks of geese. We have our formations, for example. And all summer long we’ve ridden through oceans of deep green cornfields.

Come late September, the corn turns pale brown and the leaves are left sagging on the stalks. It’s almost frightening how well-engineered a cornfield looks today with the ears all perfectly positioned about four feet up from the ground. Props to the crop engineers.  They’ve done their job over the last 7000 years.

Right now there’s consternation out there among the farmers because the tariffs imposed by the United State on China and other corn-buying nations have created a backlash. The US government is now pouring $50B back into the farm belt to pay farmers for damage caused by messing with the markets. It’s all part of a “get-even” strategy on trade levels, but the people paying the price are those with the most to lose. How bitterly ironic it must seem to Republican farmers to get whacked by the policies of their political kin.

The farmers still hauled in their crops. The fields are laid low in swaths so big the landscape seems to have blown clean. I recall visiting the cornfields near Plainfield, Illinois the week after a tornado tore through that town. The funnel stripped a clean path right through the green cornfields. It looked like a cosmic lawnmower had passed through. In town the trees were ravaged, houses and high schools were blown apart, and debris stuck out of walls as if an insane decorator was given a massive budget to spend on a town celebration.

It’s all proof that man can only control nature to a certain degree. The chaos we tend to credit to God. And that’s ironic too. 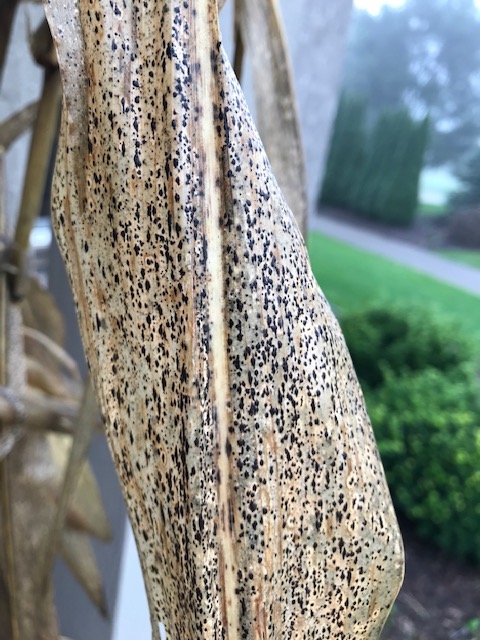 Those of us who ride between the cornstalks all summer come to think of those fields as our own. We suffer in the heat blowing off the fields. We sweat and whirr between the corn walls and let those images burn into our minds. We become children of the corn.

Of course the farmers might radically disagree with our coveting of their fields. Many don’t even like us riding on “their” roads much less visiting our pretend ownership of their expensively maintained fields.

More than once we’ve encountered weathered looking men in overalls who pull up and get out of their pickup truck to yell at us for cycling on the country roads near their homes. “I pay taxes,” one of them screamed in my face a few years ago. “Um, so do I,” was all I could muster in the moment. It didn’t seem to occur to him that a bike rider might have a life outside the lycra and the blinkie lights on the back of the bike.

Strangers in a strange land

Cyclists seem to be perceived as foreigners or strangers in a strange land. All we’re trying to do is ride between the cornstalks, which serve as a wall of sorts during the summer months. But it’s not the wall upon which you can paint graffiti or leave any evidence of your presence. It is a wall designed to pump sugars into seeds. When it’s done, those seeds are herded into combines and pumped into harvest trucks to be hauled to grain silos that stand out from the former prairie soil like the beheaded remains of the Tin Man from Wizard of Oz.

Some people view life between the cornstalks boring. And I’ll admit, there are days when riding gets a bit dull with nothing to look at but the homogenous, genetically-engineered, shining leaves of corn growing in the fields. But back at home, we feed seed to the birds, and there are bits of corn mixed in. The squirrels kick it around and even carry it all the way around the house. We’ll find cornstalks suddenly popping up out of garden beds or from the soft soil beside the drain spout. Corn is nothing more than a glorified form of grass. And there’s plenty of that in the world too. 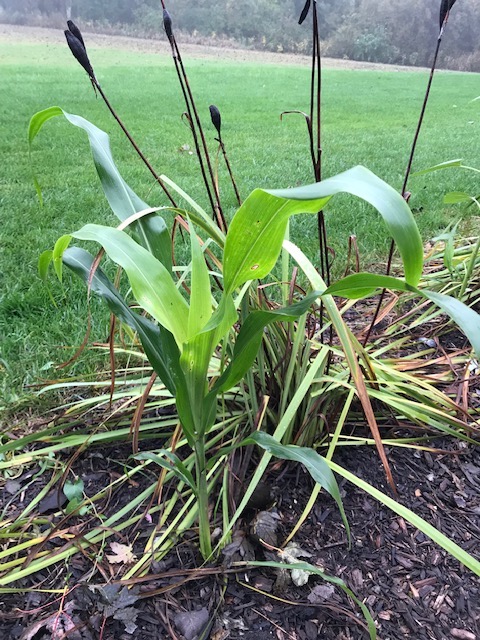 This September we let one of those stalks grow in the back yard next to a sunflower that also propagated from a single seed cast off from the bird feeder.

Our lone corn stalk will not reach maturity before the snow flies, but there’s something about letting this exaggerated piece of grass taught to produce seeds for human consumption that has both a domesticated and wild charm about it.

It’s roots (pun intended) go back thousands of years to the region of the world we now know as Mexico. From there it was distributed and diversified across the North American continent until it was eventually shared with European visitors in the 1600s.

The myths of origins surrounding corn are considerably different from the practical reality of its development and domestication as a food and feed crop. Some native Americans tell a story of how a woman descended from the clouds, was fed some deer meat by a pair of hunters, and in gratitude promised them a reward for their generosity. They returned the next year to receive corn, beans and tobacco. Such a deal! 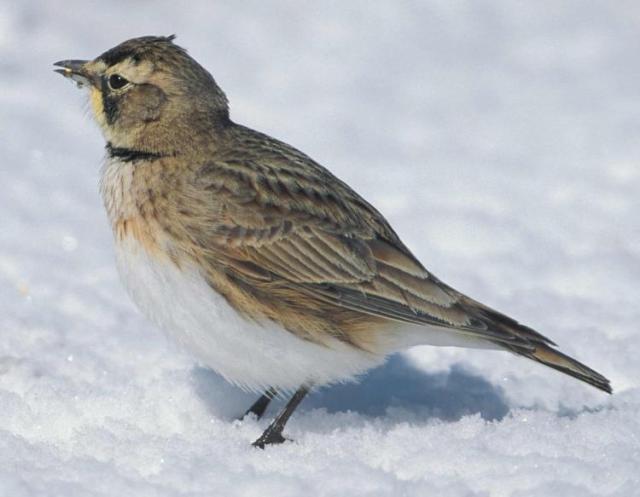 Now that the corn and bean fields are being harvested there is little to occupy the fields but the horned larks, Lapland longspurs and snow buntings descend from the north and stay in the cold and snowy fields all winter. They feed on weed seeds and roadside pickings, a truly cold comfort lifestyle for survival. But they do survive and return each year.

It will be too cold and harsh for us to cycle out in the open by then. So we wait for the first turn of sod in spring,  and venture out in the cold wind to course the open roads again. Usually, that happens in March, if we’re lucky, or April, if it’s a long winter.

Then we ride while watching for the first green tips of spring corn plants to emerge. Then we acknowledge the “Knee High by Fourth of July” progress of said crops and gladly eat our sweet corn in late July in August.

By October, we strap  corn stalks to our porch in commemoration of the passing seasons. Death leads to growth. Growth leads to death. That’s life between the cornstalks.