Putting the hammer down

Posted on July 25, 2018 by Christopher Cudworth

Standing on the starting line of a five-mile race a few years back, I could feel the energy pouring through my body. Training had been going well. I’d done a track workout of 12 X 400 at 60-63 and was feeling sharp.

Glancing down the line of runners, I saw a few that might be a threat of some sort. That didn’t shake my confidence. I knew that I was ready to run 5:00 pace for the entire race, and probably faster.

The gun went off and a group of five runners formed at the front of the race. I sat on the side of this group looking them over.

How many were already breathing hard? Who were the pretenders?

At the mile mark, passed in 4:58, it was down to three of us. By the mile-and-a-half it was just me and another guy. “How fast are you gonna go today?” he asked.

“Faster than you,” I replied. Then I took off. I won that race in a time under 24:50 and finished with a celebratory sprint up the final stretch. I’d put the hammer down and won.

There’s nothing quite like being fit and knowing it. When you’ve done the training and have seen the empiric results on your stopwatch or Garmin or power meter, it gives you confidence knowing you can handle the pace you want to run, ride or swim. And if things go really well, you can truly put the hammer down.

I’m not the same level of cyclist that I was as a runner. I took the sport up too late in life to know whether I could have been truly competitive or climbed a few categories along the way. While my aerobic fitness was great and there was plenty of will to push myself, cycling is a completely different animal than running.

Thus when I did try to put the hammer down during a criterium or two, I found my limits pretty quickly. Far more than the sport of running, cycling strategy and drafting are much more important to success. You can be super fit and waste it all by riding stupidly or chasing back onto the peloton in a hairpin turn, for example. I did that once or twice. Or, if you get gapped because a bunch of guys blow up between you and the main group, you had better put the hammer down just to keep contact, or you’ll be dropped. So there’s more than one reason to put the hammer down in cycling. 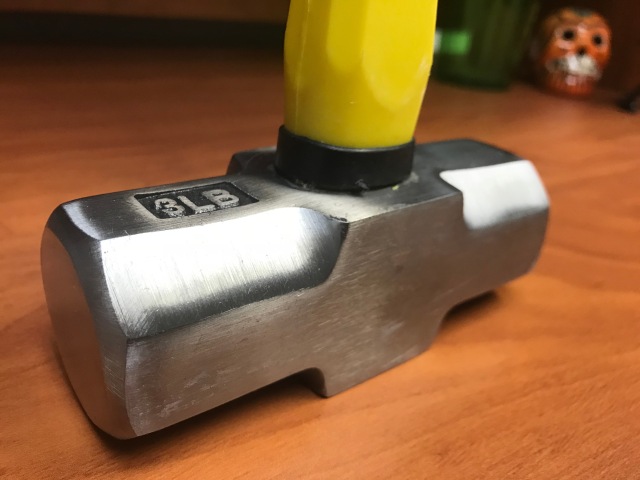 Unless you are so fit that your skinsuit looks like a coat of paint on your sculpted body, competing in triathlon typically requires a series of tradeoffs during each event. Swimming or cycling too hard in the first two stages can have a big cost when it comes time to run. More than one great cyclist in triathlon has busted a hard ride only to have jelly for legs in the run phase.

So the triathlon hammer must be applied with strength, but also finesse. It’s almost a counterintuitive thing to hold back a little when you feel great. There is more than one way to drive a nail into wood, after all. You can whack it with all your might four or five times, but if you miss the nail gets bent and the game is over.

But if you hammer consistently and accurately, the nail will get in there soon enough. That’s the art of the hammer in triathlon. Hitting the nail on the head counts more than whaling away hoping you hit it big.

Those of us that compete in endurance sports know there’s great value in the things we learn along the way. Putting the hammer down can apply in business or during life in general.

A few years back when I started dating after the loss of my wife to cancer, I met up with a gal through eHarmony.  She was a little older than me and seemed straightforward enough in our online chats. So we agreed to meet at a restaurant for drinks.

Two minutes into the conversation, she had something to say: “Look,” she told me. “I’m looking for a man willing to move to Arizona with me so that I can be closer to my son.”

I sat back, took that statement at face value and said, “Well, I think this date is through.”

Sometimes it’s best just to put the hammer down right away. That’s what she did. That’s what I did. We both moved on in life.

So let’s wrap up with a hint about how to hammer best. If you want to put the hammer down in your favorite sport, you have to practice at it. Remember that 12 X 400 workout mentioned at the start of this story. I did that speed work to teach my body how to sustain a pace even faster than the prescribed race pace in a five-mile or a 10K. When you put the hammer down in practice, be serious about it. Run or ride or swim much faster than you plan to race, and apply that principle in volume. That’s the only way to turn your body and mind into a hammer that works together.

Some things in life truly are simple. Putting the hammer down is one of them.

Christopher Cudworth is a content producer, writer and blogger with more than 25 years’ experience in B2B and B2C marketing, journalism, public relations and social media. Connect with Christopher on Twitter: @genesisfix07 and blogs at werunandride.com, therightkindofpride.com and genesisfix.wordpress.com Online portfolio: http://www.behance.net/christophercudworth
View all posts by Christopher Cudworth →
This entry was posted in 10K, 13.1, 400 meter intervals, 400 workouts, running, swimming, tri-bikes, triathlete, triathlon, triathlons and tagged hammering, put the hammer down, putting the hammer down. Bookmark the permalink.

3 Responses to Putting the hammer down